A friend recently asked me for a short description of the difference between Major Depressive Disorder and Bipolar II. I didn't keep it short.  This will not surprise my regular readers, and warn my newer ones.

But here is the short answer.  Normal mood cycles within a normal range, sad/okay/glad.  Major depression has bigger distances, between normal and really sad.  Bipolar has the biggest distances.  Bipolar I ranges from really sad to really really up, with more time spend down than up.  Bipolar II moves the base line down from bipolar I.  It goes up, though not so far, and way, way down, lower than the others.

There are other aspects to mood disorders, affecting thought, desire, motivation, energy, sleep, digestion, appetite and even physical pain.  But this astonishingly short answer says way more than your common perception that depression means you are sad; bipolar means you are crazy.

Since I regularly write about these and the other mood disorders in Prozac Monologues, it may be helpful to give the longer answer here.  So today begins another three-part series.  I do seem to like these three-part series.  Things stretch out when I want to make Prozac Monologues both clear and entertaining -- though I suspect that it's mostly people with diagnoses who get the entertaining part.

OMG!  it has been four months since I last gave an OMG! Award.  It's not that I don't keep finding excellent candidates.  It's just that I have been covering other major topics.  Plus, life just...

I am amazed and disappointed to give this month's award to HealthCentral.com for their July 22nd news release, Failed Suicide Method May Predict Likelihood of Successful Attempt.

Health Central's mission is to empower millions of people to improve and take control of their health and well-being.

Health Central addresses lots of different health issues, including mental health.  Often their information is excellent.  This time they missed the boat with this OMG Award-winning title to one of their featured articles.  They don't get points for originality.  They have repeated a much too popular -- what shall I call it?

Let me put it this way:

A twenty-seven year old woman is diagnosed with breast cancer.  Young women with breast cancer generally have a poor prognosis.  So she receives the most aggressive treatment available, including procedures that damage her body in ways that can be mended and other ways that cannot.  She undergoes intense pharmacological treatment using harsh chemicals that leave her sick, debilitated and at risk for other health complications.  Willing to try anything, she joins a support group, does mindfulness and visualization and changes her diet.

These measures eventually do work.  Her cancer goes into remission.  Her health is monitored carefully for a long time.  Just when she and her family begin to breathe again, she relapses.  Again, she opts for aggressive treatment, tries new drugs prescribed in off-label use, and again is left too weak to care for her children or leave the house.

This time, everybody's best efforts do not work.  She dies.

Does her doctor call that a success?  Does the preacher say she fought a long hard battle and finally succeeded?

Let me put it another way.

A middle-aged man has heart disease.  He gets regular medical attention, takes all his meds, monitors everything he is supposed to monitor, changes his lifestyle, even his job to reduce stress.

Nevertheless, he has a heart attack, in fact, several heart attacks.  Each time he is rushed to the hospital, where emergency personnel work their butts off to save him.  He is transferred to ICU, then to a regular bed, then to rehab.  His family posts frequent status reports on facebook, and his church prays for him every week.

Does anybody say he failed?  That he wasn't serious about these heart attacks of his?  When he returns to church or the golf course, do they turn their faces, afraid they might say the wrong thing and provoke another attack?  One that might be successful?

Mental illness is physical illness.  It has a mortality rate, just like cancer and heart disease.  We struggle desperately for years and undergo every treatment we can find and tolerate, trying to survive our illnesses.  Death by mental illness is not a success.  It is a tragedy.  Survival is not a failure.  When somebody has to be rushed to the hospital and manages to fight his or her way back to life, it is a hard won victory celebrated in heaven.  It ought to be celebrated on earth.  This person deserves a party.  With balloons.  And a cake.

Now let me pause to discuss the content of the article with this outrageous title, because the article does give important information.

The article reports research into the prognosis of suicidal individuals according to the method of self-harm they originally use.  The numbers are astounding.

Those whose initial act of self-harm takes the form of hanging, suffocation or strangulation have the poorest prognosis.  Of those who survive, 85% of them die at their own hand within a year.  They do not get it out of their system.  They die.  Within the year.  85% of them.

Those who jump, or use a firearm or drowning are at a moderately lower risk of subsequent death (69-78%, as reported in the original research.)  Those who use poisoning, overdose or cutting have the lowest risk of completed suicide with in year (25-36%.)

These figures hold true when controlling for diagnosis and for sociological factors.

That said, the single greatest risk factor for death by suicide is a previously survived episode.  Nobody gets it out of their system.

These findings have implications for aftercare.  Just as the most aggressive treatment is warranted for younger women with breast cancer and out of shape persons with heart disease, those whose original method of self-harm is hanging, strangulation or suffocation need the most intensive follow-up, monitoring and treatment.

Again that said, one potentially harmful consequence of this report is that those who use less lethal means, such as cutting or poison, may be dismissed as not serious, as engaging in attention-seeking behavior.

Yes, cutting and overdose are attention-seeking behaviors.  They are the serious attempts of seriously ill people to get serious attention for their serious condition.

Cutting and overdose have serious health consequences.  They are the methods used most often by Latina and African-American girls, who have less access to health care and mental health care anyway.  The consequences of not receiving the attention that these girls plead for are first, brain and liver damage, and then further deterioration of their lives, including dropping out of school, substance abuse, being continued victims of violence at their own hand or that of family and acquaintances, continued poor health choices and early death on account of all of the above.

If you turn your face from anybody who commits a potentially fatal act of self-harm by any means, you become the Scribe who turned his face from the man who was mugged, beaten and left for dead on the road to Jericho, because you count your agenda more important than that person's life.

As I said, this would be an unintended consequence of this article, and one that the author seek to avoid: However, "although use of more lethal methods of self-harm is an important index of suicide risk, it should not obscure the fact that self-harm in general is a key indicator of an increased risk of suicide," Hawton wrote.

Back to the OMG! Award.  I am on a Mission from God.  It is my mission, in whatever years I have remaining of my own life, permanently to eradicate the use of the word successful in the same sentence as the word suicide, and to eliminate the scandalous naming of survival as failure.

So I plead for your help.  I plead, when you hear a grieving friend or family member say that their loved one who died of mental illness was successful in the attempt, I plead that you tell that person, kindly and gently, Suicide is not a choice; it happens when pain exceeds resources for coping with pain.  I am so sorry for your loss, and so sorry that your loved one has lost the battle.

I plead that you, whenever you hear health care professionals refer to a failed attempt, that you feel and that you express your shock and horror at the words.  I plead that you confront them, and urge then to examine the hostility toward their patients and clients that lie beneath their words.

I don't usually inform people that they are winners of the OMG!!That'sWhatTheySaid Award.  Following what I have urged you to do, I will inform Health Central of their award.  Right now.

Last week I discussed two barriers to using mood charts, the complexity of some charts and the life styles of those with mood disorders.  I also suggested strategies to overcome these barriers.  Perhaps today's post should have come first.  Given the difficulties -- why bother?

The chart I use is here, the same destination linked to Mood Charting on the left side of the blog, under RESOURCES ON MENTAL ILLNESS.  The second page puts my remarks in context.  The first page was written for doctors.  This post will make all that verbage user friendly.

So let me tell you about my experience and why I am still at it.

The essential point is to understand your illness better, so you can manage it better.  These are things I have learned from my chart:

A few months ago, I posted this video description of my mood chart, calling it "Bipolar II with a touch of PTSD."

I also asked readers' experiences with mood charts, and promised a report.  Such as it is, here it is. 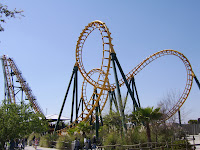 First, a mood chart is a basic tool in recovery, a way to record visually how your moods vary from day to day, or within a day for you lucky ultradian cyclers.  There are a variety of charts out there that vary by the features recorded. The chart can be paper or digital.  And yes, there's an app for that.

The chart I use keeps it simple. I record my mood each day, high or low, scale of 1-3, plus sleep, drug and alcohol consumption and meds taken or not.   I add two extra features, anxiety and irritation, again on the 1-3 scale.  These are basics.  When my meds change, I scribble little notes about side effects.  One page covers the whole month.

Nationalism and Patriotism -- For the Love of My Country

There is nothing funny about nationalism. Nationalism does not laugh at itself.

Patriotism, on the other hand, is like family. The Muppets are patriotic. Even those who don't speak English.