Mirror Neurons - They Change Everything

Blow your mind in the seven minutes and forty-four seconds:

You just watched V.S. Ramachandran, Director for the Center of Brain and Cognition at the University of California Sand Diego, cross the mind/brain barrier in his description of mirror neurons.  These neurons, a subset of the command neurons in the frontal cortex, are the neurobiological basis for imitation, culture and empathy.  What we see another do or feel causes mirror neurons in our own brains to fire, so that we understand or feel the same.

This week's blogpost is published late because I kept trying to explain what mirror neurons explain.  They explain everything.

My guess is you don't know people with schizophrenia who have jobs, own their homes, are married and join clubs and congregations.  My guess is, even if you work in the field or volunteer in homeless shelters, you do not count among your friends, your real friends, the ones you invite to your house for dinner, anybody with schizophrenia.

Lionel Aldridge decided to change that.  Lionel Aldridge played defense for the Green Bay Packers and won two Super Bowl rings.  (Go Cheeseheads!)  He lost them when schizophrenia took his life out of control.  Literally, his ring fell off his hand; he couldn't find it in the gutter.

But he came back.  He got treatment.  He vowed that if he got better, he would not remain silent, so that other people with schizophrenia would know they are not alone, so they would know they could recover, and so you would know that, too.  His story is in this link.

Imagine you have a dragon in the house.

It has been there a long time.  When it was little, you could hide it.  You knew your parents didn't like it when you talked about it.  So you guarded it as a secret for the longest time, even with its nasty habit of singeing your fingers.  But when the couch caught fire, they knew, and insisted you get help.

They want you to get rid of the dragon.  Some of them think you can.  Others think you can tranquilize it, and the couch will never catch fire again, and nobody need ever know you have a dragon in the house.

Missing My Friends With Voices

I sat next to the young man as he told his story in Peer to Peer.  Honestly, he scared me.  I was new to the loony world.  I was getting less scared of people like me (and through them, eventually less scared of me).  But I was still scared of people with schizophrenia.  And this one, especially.  The others had a grip.  My young man had missed a session or two, not yet stable, like, able to tolerate a large room with twenty people stretched around big tables.

He whispered.  They asked him to speak up, but the longer he talked, stretching the three-minute limit to ten or fifteen, the softer his voice got.  I strained to hear him.  I was the only person in the room who could.  The story rambled, hitchhiking around obstacles and through obscure events.  If he hadn't whispered, if I hadn't strained so hard to hear the words, I would have missed it.  I would have missed him.

It actually made sense.  There was a flow.  The connections were loose, granted.  But if I got in the canoe with him, I could ride the river as he paddled through his quest to make sense of it.

That was my introduction to the inner world of schizophrenia.  My life is richer for it.  Yours could be, too.

Kelly Flanagan is a psychotherapist who blogs.  I think that is brave of him.  Most mental health professionals keeps a decidedly low profile online.  Boundaries, you know.


Flanagan not only blogs -- he puts it right out there.

[I have been sick as a dog this week, and will share him with you, instead of churning out my own stuff.  Thanks, Kelly, for doing the heavy lifting.]

Flanagan's blog is called Untangled, and his theme is redemption: Tell a redemptive story with your life.  Now. 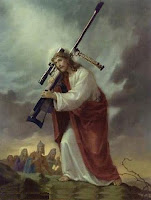 Immediately, he is asking for trouble in this bizarre world where meanness has become the measure of ones Christianity, and all those Christian words are distorted to stand for the opposite of what they intend.

In this Orwellian world, (where entitlement means something to which you are not entitled) Redemption means that you have paid whatever price somebody else has decided you ought to pay in mental gymnastics and conformity to their way of life.