Did you know that more people are murdered at 92 degrees Fahrenheit than any other temperature? I read an article once. Lower temperatures, people are easy-going, over 92 and it's too hot to move, but just 92, people get irritable.

That's what the sheriff said in an opening scene of It Came from Outer Space. Set in Arizona -- even in black and white, you could feel the heat rolling off the sand. And throughout the movie, they attributed people's reports of strange sightings to heat-induced lunacy.

Everybody is irritable right now in -- how shall we put this? -- the coolest summer we will experience for the rest of our lives. Everybody is exhausted. But some of us more than others.

The health department reminds us to check in on the old folks, to remember the pets. The newspaper reports on the location of cooling stations for the homeless. But it falls to us loonies to remind each other to watch out for fellow loonies.

The DSM doesn't mention it, no doctor ever responded with a simple acknowledgment when I brought it up, but part of bipolar is difficulty with temperature regulation.

Makes sense, doesn't it? There's more to bipolar disorder than up and down, more than happy and sad. It's about balance, or rather, lack thereof. Our brains are not good at maintaining homeostasis. Translation: they can't adjust to changing conditions for a whole range of normally fluctuating levels (hormones, blood pressure, appetite, energy, and yes, temperature).

Natasha Tracy's article in HealthyPlace.com reports on meta-analyses of studies on the effects of heat on people with mental illness. More people are murdered, the sheriff said? It turns out that suicides go up in high heat. Wow.

Here is one such study that showed a link between the temperature outside and hospitalizations for bipolar.

Let's layer on, like an ugly sweater, the effect of medications that many of us loonies take. Anticholinergic drugs, tricyclic antidepressants and antipsychotics among them, decrease the production of sweat. There goes our number one cooling mechanism offline. 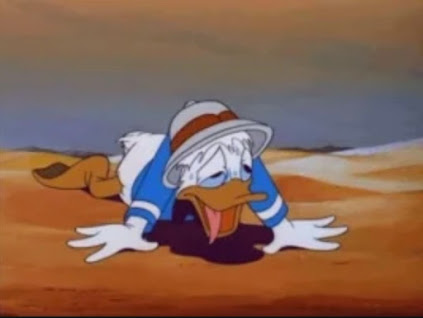 What about lithium? Anyone who takes it has been warned about the dangers of lithium in hot weather. Lithium is a salt, with a narrow range of acceptable blood levels. So if you do sweat and become dehydrated, you risk becoming toxic.

Well, weigh lithium's toxicity against its protection against suicide. It may still be your best choice.

Catch heat exhaustion in its earliest stages, with light-headedness, fatigue, dizziness, nausea, muscle cramping. Move to an air conditioned place, remove extra clothing, take a shower or cover yourself with a wet towel, lie down, drink fluids -- the kind that do not have alcohol in them!

Heat stroke, what you get when you don't pay attention, is a life threatening condition. Once you get there, with headache, confusion, no sweating, rapid heart rate, hot red dry skin, nausea or vomiting, loss of consciousness, you are likely unable to notice the problem, let alone get yourself the help you need. But if you notice somebody else with heat stroke, call 911 -- yes, this is a medical emergency -- use the shower or wet towel trick, and do NOT give fluids.

With the outside temp at 104 and still rising today, as I write this, I am sitting inside my house, which is well-insulated and holding at 84, but has no air conditioning. I have a wet towel around my neck. I have another wet towel under my bare feet, doubled over, with ice cubes between the layers. I have a glass of water next to me, with no ice, because tepid water is better at cooling than iced, for some reason. I will be leaving shortly to spend the night with my in laws. They do have AC.

Public libraries, movies, grocery stores -- a few more ideas. If you don't have AC, now would also be a good time to avoid alcohol, which is dehydrating.

Take care, dear readers, and check up on your loonie neighbors!

Last week Psychology Today posted Bipolar Disorder: How to Get Correctly Diagnosed, my interview with Monica Starkman, M.D. about Prozac Monologues: A Voice from the Edge. Its tag says, The average of seven years to receive accurate diagnosis is unacceptably high.

Damn straight it is! The article is about how to improve that rate, or at least to improve the odds for the people who follow its suggestions.

This popular journal chose to place the article in its Essential Reads section on its bipolar resource page. The article's key points include:
I spent a mere (!) five years misdiagnosed with major depression, two of them taking the antidepressants that threw me into mixed episodes and made me suicidal. A random conversation on an airplane led me to the Mood Disorder Questionnaire referenced in the Psychology Today article. Taking the MDQ was the first step to discovering my bipolar and, more importantly, getting on the road to recovery.
So the exciting thing is that this information will be accessible to a larger audience than those of us who go poking around medical journals. That is my mission. Contact me on my website if I can speak to your book club, church group, or fraternal organization about mental illness and recovery.
The ironic thing? -- The photo the magazine chose to accompany the article. 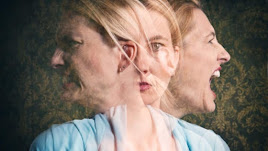 This photo ticked all the boxes in the memo I sent to the cover design people for Prozac Monologues, saying,
Don't even.
In fact, this photo showed up in my Facebook feed twice last week, once illustrating my own article, the other to go with a HealthiNation post, Four Myths about Bipolar Disorder. The photo suggests the following myths:

MYTH: The mood shifts are rapid and constant.

MYTH: Mania is a euphoric mood.

I mean, doesn't she look like she's on a wild whipsaw of emotion? Check out the article to learn more about why these myths distort the reality of bipolar disorder.

In a nutshell, bipolar exists across a range, and shows up in many cognitive and energetic systems, not just mood. It's not just up and down. I took too much trouble to demonstrate that in Prozac Monologues to have the cover undo my labors.
I also told the cover design people that I didn't want a white woman on the cover. I didn't want anything that suggested to people of other races that this book was not about them. Because mental illness does not discriminate by race or gender. Neither should information, treatment, nor recovery.

On a personal note, the Independent Book Publishers Association recently awarded Prozac Monologues a Benjamin Franklin Award in the highly competitive category of autobiography and memoir. Of the front cover design, one judge wrote: Outstanding. So creative and effective. One of the best this judge has seen among this year’s contest entries. The cover design is powerful and impactful. It will make a reader/browser/ shopper want to learn more about the book’s content. Fantastic.
I concur, and want to give credit to Leah Lococo of She Writes Press for her work. Not only did her design dodge the pitfalls of bipolar myths, but she managed to capture the story itself, the hypomanic episode that kicked off by writing the first seven monologues in eight days on a yellow notepad, filling every line, every margin, and every space between with energy and urgency.
(The judge liked the back cover even more.)
So. Yay! A good month with an expanded reach for information that is vital to people whose depression is not getting better:
It might be depression plus something more.
And you might be able to get better after all.
Plus a little bit of weirdness about misunderstandings of bipolar disorder. But that part isn't really news, is it.
at June 01, 2021 No comments: