Robert Spitzer -- some people call him the Father of Modern Psychiatry.  In 1980 he took the DSM II, widely criticized for unreliability and lack of validity, and as editor of the DSM III, turned this obscure publication of the American Psychiatric Association into the standard reference work that defined every psychiatric disorder we've got.  It was research-based.  It listed objective criteria.  It was honkin' big, but it could be understood, not only by researchers, but also by practitioners.

Spitzer's acolyte, Allen Frances edited the DSM IV, which added a lot of information, but did not change Spitzer's basic framework for how these diseases are characterized.  Frances was a consultant for the DSM V, until he quit, basically because the new editors started to rethink things.  Frances now leads the charge against the DSM V, which has delayed its publication.  I won't develop that theme right now...

Robert Spitzer is the Man.

And her mission as First Lady of the United States of America is to address the epidemic of childhood obesity.

She began this effort when her children's pediatrician noticed they were developing some issues.  That brought her own food issues to her attention.  So she changed the way her family eats.  Less fast food.  More fruits and veggies. 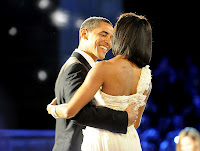 It wasn't about looking like a model, getting into that dress for the big event.  It wasn't a diet.  It was, and is about change, for the sake of health.

She still eats pie.  Just, not all the time.

Hypomania Goes To A Blog Party

The American Psychological Association is throwing a blog party.  Today!!  Why didn't anybody tell me about it until today?!  Maybe because they have heard about me and parties?

I didn't know about me and parties.  I didn't figure it out until I discovered I have bipolar II.  -- Not bipolar I.  Everybody knows about that kind of crazy.  Bipolar II is -- well, you never know what you're going to get.  Sometimes what you get makes you the life of the party.  Sometimes in a good way.  Sometimes it makes you crazy productive and successful at work.  That is why it years and years to get a bipolar II diagnosis.  Nobody goes to the doctor because they feel great, are having fun, and are the apple of the boss's eye.

I don't know that for a fact.  Actually, the piss in question is John McManamy's piss.  And he has the experience to back his claim.

Nor do I have any recollection of how I discovered McManamy's blog, Knowledge is Necessity, and from there, his enormous set of resources at McMan's Depression and Bipolar Web.  But as it happens, my entry into McMan World was Skunk -- the blog piece from August, 2009 that inspired his new book's title, Raccoons Respect My Piss, available in kindle format and now in paperback.


Since I asked John's permission to steal Skunk, which I guess means I didn't steal it, we have become what I call blogmates.  He most graciously gave me a leg up in this business, plugging Prozac Monologues in its infancy on his own blog.  Since then, we often find we are captured by the same curiosities at the same time -- as he puts it, God, neurons and everything between.

Exercise and learning new things -- two of the most powerful tools in the Recovery Toolbox.  They came together in my NAMI Camino, April 28, 2012.

NAMI Walk/NAMI Camino gave you the set up.  NAMI Johnson County held its annual walk/fund-raiser last week, when I was in Costa Rica.  It would be my fourth and last time participating.  But I would be in Costa Rica!  Inspired by the San Diego Walk in 2010, when a battalion in Iraq ran while San Diego walked, I decided to do Johnson County's Walk long distance -- though I would not be running in full battle armor and in the heat of the day.  My extra effort was confined to carrying a laptop to record the event.

With the following results:

So what follows is a series of installments, stopping at each kilometer marker.  This series shows you what you can do with Photo Booth, Youtube, not much skill, and a willingness to experiment.  Everything is reversed, left and right, which won't confuse you unless you are trying to read t-shirts or street signs.