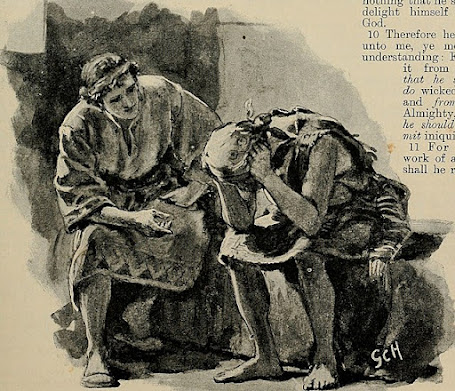 Fourteen years ago, I wrote an essay titled, I don't believe in God anymore. It was a response to my grief about my mental illness, the loss of my self-image, my sense of confidence as a person who could rely on the state of my own mind.

I wasn't suicidal at the time. But I was acutely aware that chances are I would be again in the future, because I have a remitting, recurring condition. It appears, it gets better, it flairs again. And suicidal ideation is one of its symptoms, a particularly cruel symptom.

I felt betrayed. Betrayed by God.

I mean, I had given my life, my energy, my health to serving God. And all of those things had been taken away from me. Me!

And I thought I could count on God, too. So, I wrote, I don't believe in God anymore. Just don't trust the guy like I used to.

Job had a different response to his grief. He never said, I don't believe in God anymore. He continued to challenge God to be the God he thought he knew. But there are ways that the book resounds powerfully for me.

And maybe for you.

It is a book about grief, about loss, about a world that has been turned upside down, and taken so much that we held dear with it. And many of us have lost. Many of us grieve. Even if not as vocally, as vociferously, as Job.

A job, a career that meant the world that was taken from us. A love that ended. A beloved who has died. A child who went another way. A child who never was. A secret loss that is not spoken.

And of course, we are surrounded by global loss, nearly five million people dead now worldwide from this pandemic, even more millions who are permanently disabled, the underbelly of this pandemic that we have not yet explored. Inevitably, maybe more painfully, the millions become one and one and one, not numbers out there, but individuals, people we can name.

Collateral losses, a social fabric that is falling apart, families at odds with one another, a collapsing health care system, a government that is not able to fulfill one of its basic functions, because public health, public anything ultimately comes down to what Dr. Fauci said, I just don't know how to convince people that they ought to care about each other.

And I'll tell you, as a priest, it is embarrassing to be confronted so graphically with the failure of the Church's mission to teach people to follow Jesus.

It is embarrassing when the Church fails to speak, because somebody called it a political agenda, to care about each other, to give up something of ourselves, as Christ did, who did not count equality with God a thing to be grasped, but emptied himself, taking the form of a servant, for the sake of another.

And I could go on. But you get the picture. And you wonder why I am pushing it in your face, that we are experiencing devastating loss and incredible grief, both publicly and personally. We want to forget. We want so desperately to forget.

Our ministry development team process got cut short in the second unit, a foretaste of our grief to come. There are six units. The design is to read through the Bible, book at a time, considering the issues that each book raises for how the people of God live together. Job gets his turn in the third unit, pastoral care, where the process asks the participants to examine in themselves how very hard it is to listen to somebody else's pain when you can't fix it.

We don't read much of Job on Sunday mornings. Preachers dodge the book. It used to be, we didn't read the book on Sunday mornings at all. So many of us think of it as this problematic part of the Bible that starts out disturbing - this bizarre test of a righteous man, to find out just how much he can endure, the loss of his fortune, the deaths of every single one of his children, and then this miserable, miserable skin disease.

Then it turns depressing.

If you have ever tried to read it, you know that he goes on and on and on with his complaints. His friends did listen to him for two weeks. And they don't really get credit for that, that they sat with their friend in his anger and his terrible grief for two whole weeks.

But they did. They did their best with the pastoral care training they had. Until it just ran out and they started saying all those things that we say, trying to make the pain go away, if not Job's pain, then at least our own.

See, it is so hard to look into somebody else's abyss and not back away.

Job is not the only one in the Bible who grieves. Out of 150 psalms, forty-two are psalms of lament. They speak of grief, of loss, failure, betrayal.

The Israelites were not like Americans. They did not expect that they would always win, that they would leave the field victorious, happy. In their worship, they could speak of their sorrow.

That's not part of our culture in the United States. We can speak of our rage, but not our failure.

American culture presses to the ending of the book of Job. See, there are two parts to the book, this fable of a righteous man who was tested, who endured the test, and was rewarded by all those good things we heard at the end of the reading this morning.

But somebody came along later, took that fable and said, Nonsense! Listen to Job! Let him have his say.

I mean, even Jesus got his say, hanging on the cross, My God, my God, why have you forsaken me?

Let Jesus, hanging on that cross, have his say, My God, why have you forsaken me?

And then have your own say.

That's what the book of Hebrews is about. Because he has been there, he has been here, he knows what is in our hearts. Consequently, he is able for all time to save those who approach God though him, since he always lives to make intercession for them.

There he is up on that cross, praying the words that we would pray, that we do pray, when we pray what is truly in our hearts.

You have forsaken me. I don't believe in you anymore. I can't trust you.

That's not part of our culture in the United States. We can speak of our rage, but not our failure. So I know that I break the taboo when I said, I don't believe in God anymore.

How do I end this? How do I resolve this unbearable tension?

How did the book of Job resolve it?

There are two endings. The last words we hear are from that ridiculous fable: It's okay. He got his fortune back. He had more kids. And gee, the next daughters were even prettier than the ones who died!

So - what? Pass the test and you'll get your happy ending, too?

The poet who wrote the bulk of the book, the big middle, went in another direction. For thirty-seven chapters, Job challenged God to be the God he thought he knew. The God he thought he knew. After thirty-seven chapters - and congratulations if you really do sit with Job and let him have his say - if you get through them all - in chapter thirty-eight, finally, God shows up.

And God says, Who is this that hides counsel without knowledge?

Where were you when I laid the foundation of the earth?

Have you commanded the morning since your days began?

Is it by your wisdom that the hawk soars?

Well, that goes on for a while. God has God's say, and keeps saying it, until ultimately Job succumbs, I have uttered what I did not understand. . . I repent in dust and ashes.

I take two things from what God has to say.

First, I take comfort by putting myself in my place. Whatever my misery is, and it is great, at times it has nearly overwhelmed me, yet I am small. The universe is vast. And starting at chapter 38, that universe, and God's creation of it, is worth reading.

When I in awesome wonder consider all the worlds Thy hands have made, I see the stars, I hear the rolling thunder, Thy power throughout the universe displayed,

This misery that surrounds me, that once blocked out every single person who loves me, and horse and hawk and mountain and Cliffs of Moher and stars around me, this misery is small. It is held, I am held, in something vast, something that turns out to be magnificent, and powerful.

And maybe, just maybe, what holds that vastness, and me in it, and you, and you, turns out to be love.

And the second thing that I take from the book of Job, and from that long dark night that Job traveled, that I have traveled, and perhaps you, too -

I just don't know as much about God as I used to.

God says, Who is this that hides counsel without knowledge? Who do you think you are?

With Job I have to answer, I have uttered what I did not understand, things too wonderful for me, which I did not know.

And I still don't know. I don't know as much about God as I used to.

I think love has something to do with it. So, all I can do is choose, as best I can, to follow the one who has gone the way of love.