Missing My Friends With Voices

I sat next to the young man as he told his story in Peer to Peer.  Honestly, he scared me.  I was new to the loony world.  I was getting less scared of people like me (and through them, eventually less scared of me).  But I was still scared of people with schizophrenia.  And this one, especially.  The others had a grip.  My young man had missed a session or two, not yet stable, like, able to tolerate a large room with twenty people stretched around big tables.

He whispered.  They asked him to speak up, but the longer he talked, stretching the three-minute limit to ten or fifteen, the softer his voice got.  I strained to hear him.  I was the only person in the room who could.  The story rambled, hitchhiking around obstacles and through obscure events.  If he hadn't whispered, if I hadn't strained so hard to hear the words, I would have missed it.  I would have missed him.

It actually made sense.  There was a flow.  The connections were loose, granted.  But if I got in the canoe with him, I could ride the river as he paddled through his quest to make sense of it.

That was my introduction to the inner world of schizophrenia.  My life is richer for it.  Yours could be, too.


Okay, let me be clear.  I believe in mental illness.  I believe it is real, that its suffering is real.  Boy, do I believe that.  I believe psychiatry can ease some of the suffering, and that it should.

The experience of hearing voices causes pain, and I wish for my friends who hear them that they be relieved of their pain.

Now lots of people hear voices.  Lots of religious people hear God talk to them.  Not many admit it.  But I will.  I have.  The words are rare, short and to the point -- though in my experience, often not the point that I raised.  They invariably introduce innovation, force me to turn, which, upon reflection, is a good thing, though not what I had in mind.  For most people, hearing the voice of God comforts, challenges, strengthens.  We leave the encounter in a better place.

The voices of schizophrenia are not like that.  They are a running commentary, like an IPod stuck on a bad rap song.  You stink you suck you don't know what you're talking about these people hate you they have their reasons shut your pie hole nobody wants to hear you they want you to go away your mother wishes she had an abortion you ought to die get under the bus, not on it...  That sort of thing.

And here begins the dance. But first --


What Causes The Symptoms of Schizophrenia?

Gee, what a good question! 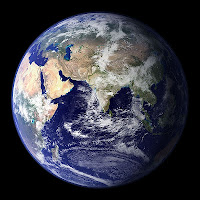 These are diverse symptoms, and undoubtedly involve multiple systems within the brain, and multiple interactions among multiple systems.  Brain function is an ecology.  Gone are the days when scientists were looking for the single bullet to repair the single chemical imbalance.

But not long gone.

Much of mental health research has been generated by the accidental discovery that some medication, given for some other ailment, turned out to relieve symptoms of mental illness for those persons who had the other ailment but also had a mental illness of some sort, as well.  Then the scientists got to work trying to explain what that particular medication does, and by extension, what is wrong inside the brains of people who benefit from taking it.

Dopamine is a neurotransmitter.  It transmits messages from one neuron to another.  It has several roles in the brain:
The Dopamine Hypothesis says that dysfunction in the regulation of this neurotransmitter causes the symptoms of schizophrenia. 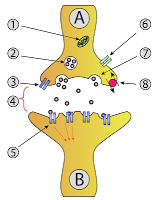 This is a graphic of two neurons, the sending neuron A and the receiving neuron B.  #4 is the synapse (gap) between them.  The little dots in the synapse represent the dopamine, which has been released from neuron A and is being received by neuron B through the receptors, #5

Reduce the dopamine, or turn off the receptors, or ratchet back the sensitivity, you reduce the positive symptoms.

Psychosis (distorted thinking, hallucinations, voices) is the principle target of the meds up to this point.  The success of meds is measured by how much they reduce psychosis.

See, we all have these little negative thoughts, doubts, fears that pop into our heads.  They pop in and pop out, mostly before we notice.  But people with schizophrenia can't help but notice.  The meds dial back the noticing by make the brain less active, and the person more able to ignore troublesome thoughts and voices.

Join NAMI to read the interview with Dr. Nancy Andreason in the Winter 2013 issue of Advocate for DSM history on schizophrenia.  It wasn't until DSM IV that the other symptoms, the negative and cognitive ones were even recognized.

Except by the people who hear the voices.

With that we have circled back to the dance, in time for the next installment of My Friends With Voices.