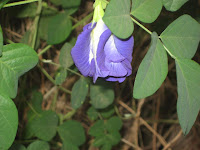 This is my breakfast view on the left.  It is called patita, a vine on the edge of my porch.  I planted the seeds myself.  A stranger gave them to me when I admired it in his yard. 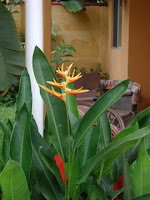 If I look to the right, I see "bird of paradise," outside my neighbor's door.

Some friends invited us for drinks and this view at sunset. 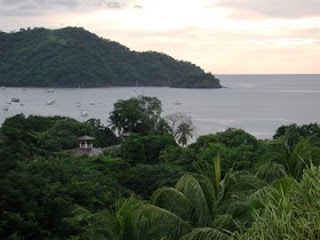 Why the hell would anybody be depressed in Costa Rica?

I prepare my answer for friends back in Iowa.  Most of my friends already know the answer, or else are too discrete to ask.  I really just ask myself.  Why the hell am I depressed in Costa Rica.

So there must be depression in Costa Rica.  I am simply one of the people who have it.  There is something about the way that my brain works, as there is something about the way that other people's brains work, that give us this condition that is found across the planet, in every culture, even in a place where plants grow that are called "bird of paradise."

If other people have trouble believing that it is real, why should I be surprised?  I still wake up mornings and think, "This is crazy!  Snap out of it!"

When I packed for my latest trip, I didn't pack enough medication.  Oh, I knew I couldn't get nortriptyline here in the formulation and dosage that I take -- a question I had asked in a previous trip.  So even though they aren't as effective as they used to be, I counted those particular pills carefully.  But the Valium that takes the edge off until my psychiatrist and I can find the next solution, or at least decide on the next chemistry experiment -- well, who would need Valium in Costa Rica?

So last week I found myself in the pharmacy again, asking about Valium.  It is one of the drugs for which you have to have a prescription.  (You don't for Prozac, nor for Viagra, if that might influence your travel plans.)  It turns out that the eighteen year old with the ponytail who was talking with the staff is the doctor.  No, he must be older than eighteen, not a blemish on that beautiful skin.  I went to his office yesterday, where he had his prescription pad, and he was very understanding.  Still not wanting to believe that I take Valium, I kept underestimating how many I would need before I got back to Iowa.  But he convinced me that if I truly had enough, then I wouldn't worry about it.  I had  said that at the pharmacy, that I was worried about it.  He heard me, and he remembered.  For an eighteen year old, he is really good at paying attention.

Then I asked about Lunesta.  I don't take it very often.  Insomnia is not a side effect of my current med.  I just need it when I get caught at night reliving a living nightmare.  I wondered if I could find a cheaper source.  No, they don't have that one in Costa Rica.  But that started a conversation about side effects, insomnia, SSRI's and all those things I think about.  He said they have a different attitude in Costa Rica.  These side effects are terrible, he said.  So they don't use these heavy duty meds like Zoloft, except as a last resort.  First they try psychotherapy, then very small doses of tricyclics.

I know that Prozac became so popular because it was supposed to work better and have less side effects than the older meds that they prefer in Costa Rica.  And I realize a lot of people swear by it.  But I don't get it.  Over time, SSRI's and SNRI's have turned out to be no more effective than the TCA's.  As far as side effects go, maybe fewer people have them with the newer meds -- I don't know.  That's what the drug reps say.  But if you have to choose between hard core insomnia (Prozac/SSRI) and dry mouth (Elavil/TCA), between suicidal impulses (Cymbalta/SNRI) and constipation (Pamelor/TCA), I have experienced them all, and I'm going for the Costa Rican approach.

Meanwhile, back in the world of publishing papers, there is a current buzz about an old idea, that depression serves a purpose for the species.  It may surprise you to know, but not every culture and every time has tried to extinguish the Grim when it rears its head.  The approach of the European Middle Ages was to classify it as one of the four humours, melancholia.  It may cause difficulties when the humours are out of balance.  But there is a place in this world for the melancholic.  We are good gardeners, night watchmen, writers.  Paul Andrews and J. Anderson Thompson argue for Depression's Evolutionary Roots, that it exists because it "is not a malfunction, but a mental adaptation that brings certain cognitive advantages," among them the ability to ruminate, to think carefully about complex issues and solve problems.  That is not the way my therapist talked about rumination.

I will keep reading and thinking about these ideas, because that is one of the things I do.  I ruminate.  So you will find out more about rumination in the coming months.  Meanwhile, I have a new determination to treat my depression, my body, my mind gently, to discover what I can do with what I have been given.  I am not quite ready to call it a gift.  But I am disinclined to poison myself in order to get rid of it.

Costa Rica is a gentle place.