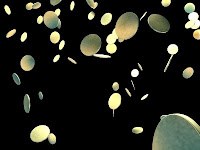 I knew about tithing because I am a Christian.  The concept comes from the Old Testament.  I used to think it was interesting -- from a distance.  Like fasting.  Of course nobody except the legalists actually did it.  Still, I suspected I was missing something.

Then two things happened within two months.  I left the person to whom I had turned over all decisions that mattered.  And I attended a conference about what was called the "Alabama Plan."  We did bible studies about money, about tithing, about abundance and God's promises.  And then we were asked, What is preventing you from claiming God's promises?  I realized my answer was -- nothing.  Nothing prevented me.

So I became a tither.

Now remember the context.  Having just moved out on the chief money maker of the family, my household income had plummeted to 40% of what it had been.  It occurred to me -- this was the perfect time to begin tithing.  Instead of 10% of what I was used to living on, now it would cost me just 4%.  The difference between living on 40% and living on 36% didn't seem like that bit a deal.

I was so excited by my new resolution that I decided to tithe for the previous two months as well.  So I sat down with my checkbook.  That's when the magic happened.

Suddenly, I had $300 to give to whatever cause I wanted.

And I have never looked back.  In the years since, I have purchased honey bees, rabbits, trees, a pig, a llama, a sheep, and this year a goat from the Heifer Project.  I have purchased mosquito nets from UNICEF.  I have fought hate crimes and taught tolerance through the Southern Poverty Law Project.  I am helping secure marriage equality through the Lambda Legal Defense Fund.

My most satisfying sense of wealth was the opportunity to purchase four chlorinaters for $300 a pop.  They provide four villages in Swaziland with clean drinking water.  The last time our diocese sent a team to partner with the Anglican Church there, they sent back word, "One elder welcomed us with great thanks. He said, 'Ever since you came, we have not buried a child.'  It's a much bigger project than my contribution.  Now the Swazis are making the chlorinaters themselves.

And I have given lots of money to old churches in small towns.  I make no apologies for paying heating bills of drafty old buildings.  "Hearts starve as well as bodies; Give us bread, but give us roses."  In out of the way places, stained glass windows are the only art most people see.  So I am glad to support the furnace repairs of my church home.  We are family.  Paying the bills is part of belonging.

I couldn't do all this if I hadn't made a commitment -- 10% on the first line item of my budget.  If I had to decide each month whether I could afford it, well, of course there are other things I "need."  But with that money already allotted, my only decision is where I get to spend it.  Frankly, it's almost the only discretionary money I have.  That there is so much of it makes me feel rich.

And what on earth does this have to do with Prozac Monologues: reflections and research on the mind, the brain, depression and society?  This:

Regarding depression: those of us with mental illness experience loss piled on loss, often including financial loss.  We live in a world so programmed for consumption that it consumes us.  We are surrounded by images of things we don't have.  It hurts to feel poor.

Regarding society: the "Crazy Delusion" consumes all the rest of us, as well.  Do you realize that of the almost 7,000,000,000 people on the planet, most of them do not have cable?

Regarding the mind: think of tithing as Cognitive Behavioral Therapy.  First, pay attention to your feelings about money.  Money is the quickest way into what we value.  Examine the assumptions behind your feelings.  Challenge your assumptions.  Do they have a basis in reality?  Explore and test options.

Nothing has ever matched the rush I got when I wrote those first checks.  If you have to be careful about mania triggers, you might start slower.  Figure out what you gave away last year.  Calculate the percentage.  Double it this year, and double it again next year, until you reach your goal.  The trick is to make it a line item in your budget, as intentional as your light bill.

Tithing is a spiritual practice for the dark night, a way to push back your feelings of loss and your anxiety about the future.  I am not going to promise that you will be rewarded by an unexpected windfall.  Rather, it will occur to you that you already have enough.

So like thankfulness, tithing is a form of mindfulness, paying attention.  The Torah has given us this great gift.  Claim it.  As Moses said, Choose life.

P.S.  I seem to have given a lot of advice lately.  Too much.  There will be no third spiritual practice; the series ends here.


Photo by Salvatore Vuono from freedigitalphotos.net