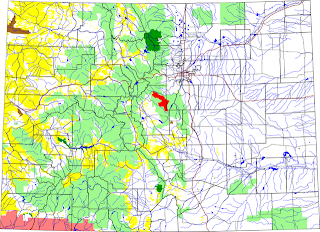 I have been writing about the newly released draft of the Diagnostic and Statistical Manual -- DSM V for the last few weeks.  Let's recap:

The DSM V -- What's at Stake: The pharmaceutical and health insurance industries have a huge financial stake in who gets diagnosed with what in the mood disorder section of the Diagnostic and Statistical Manual.  This stake has skewed the new draft version of the DSM to support the status quo/current market conditions.

The DSM V made almost no changes in the Mood Disorders section.  (Well, a few, not so minor for children and the bereaved.)  This despite the evidence that the current criteria for bipolar II exclude people who are instead diagnosed with recurrent unipolar depression, but who get much worse when treated as though they had recurrent unipolar depression, and who eventually are diagnosed with bipolar II anyway, if they are still alive.  Women spend eleven years on average before being diagnosed correctly.  That's eleven years of a lot of suffering on a lot of antidepressants.  One helpful modification in the bipolar II area will become important below.

The Draft DSM V -- How Did We Get Here?: Advances in the treatment of  depression have come about by serendipitous discoveries, followed by pharaceutical companies' desires to improve their own market share.  These have been genuine advances.  However, their manipulation of research to support their products is a national disgrace.  The AMA is finally embarrassed by it.

That is where last week's post left us, at Mile Marker #3 in "Up a Creek Wilderness" -- the sorry state of research on this map that is owned by the pharmaceutical companies.

So now we have arrived at: 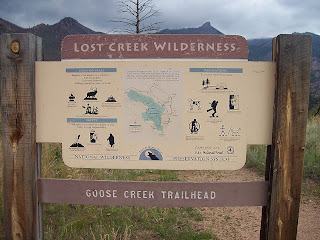 Mile Marker #4 -- Their goose is cooked.  They have run out of product.  There are lots of ideas out there besides the tired old "chemical imbalance/neurotransmitter" fixation on one aspect of depression.  And research is being done on other neurological mechanisms of depression.  But Big Pharma got lazy and has been slow to develop these ideas into useful medications.

Patents have expired on almost all the antidepressants on the market today.  The sleight of hand trick is to repackage the same medication by altering its formulation a little bit (Celexa/Lexapro, Effexor/Pristiq) or by doing a time-release version to add a few years to the patent (Paxil CR, Wellbutrin XL).  But that strategy has a time limit, and lack of development has caught up with these companies.

I think Eli Lilly's new product Symbyax is the ultimate in failed strategies, combining the patent-expired Prozac/fluoxetine (originally used for major depression) with the newer and controversial Zyprexa (originally used for psychosis and lately the subject of successful lawsuits).  If it really were a good idea, you could get the same results with two prescriptions, the antidepressant that worked best and an antipsychotic less dangerous than Zyprexa, instead of the two products owned by Eli Lilly.  With the combination package, you get the side effects of both: sexual dysfunction, agitation, akathisia, insomnia, etc. for Prozac and ballooning weight gain, high blood sugar, risk of diabetes, high cholesterol, tardive dyskinesia, etc. for Zyprexa.

Nevertheless Symbyox will make Eli Lilly a bit of money for a while, because it has widened the market for Zyprexa.  They need another market since that successful lawsuit reduced its use among older people with psychosis (who experience a rather nasty side effect of death from Zyprexa's off-label use for dementia.)  Symbyax now is also indicated for people with treatment-resistant depression, whose doctors need to keep coming up with something new to give them. God forbid they should reexamine the diagnosis, or that the DSM V should encourage them to do so.  People with treatment-resistant depression account for half of the depression market, the half that stays on the market, because they "keep trying," like everybody tells them they should.  So good luck, Lilly.  I hope you are in court again soon.

Mile Marker #5 -- It turns out that we have been traveling in a circle, and now looped back to the beginning.  This is where I find the good news.

We have another serendipitous discovery!  Lamictal was first used as an anti-convulsant.  Following the pattern of other advances in the treatment of depression, Lamictal's mood-related effects first became apparent in people with epilepsy.  Happy seizures. -- Though unlike previous medications, Lamictal works just fine for its original purpose, as well.

Lamictal (generic name lamotrigine) is now approved for use in managing seizures and bipolar I.  Its off-label uses include bipolar II and treatment-resistant unipolar depression.  (When a doctor prescribes a medication for something that it hasn't been approved for, that's called "off-label" use.)

This "off-label" use issue is critical here to advance the treatment of depression, especially for those who are misdiagnosed (using DSM V guidelines) with unipolar depression.

The rules regarding marketing of off-label use are in flux.  Currently, sales representatives may not recommend their products for off-label use, but they may direct doctors to research about such use. They may not, however, pay doctors to tell other doctors about their experiences with off-label use, at continuing education conferences and the like.  That's what got Pfizer busted, for their marketing of Geodon, another anti-psychotic like Zyprexa, while searching for their market share of dementia and depression.  The money in these cases generally goes to Medicaid and Medicare, who paid for the prescriptions. 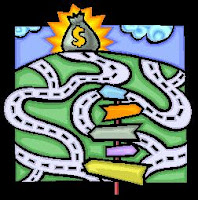 See, there's a swamp out there between Mile Marker #5, the next serendipitous discovery and:

Doctors prescribe medications for off-label use all the time.  Drugs that have been tested and approved only for adults are tried on children.  Otherwise, there wouldn't be anything they could give to kids, because who wants to risk clinical trials on kids?  Drugs approved for one type of cancer are tried for another, because who wants to say "no" to somebody whose cancer has metastasized?

Off-label use gets turned into approved use if it works out in new clinical trials.  If it doesn't work out, it goes away.  That's the way it's supposed to work.  But if the trials don't work out, and the drug companies fudge the data and market the medication anyway, then they get sued.

My doctor told me that Lamictal is the "go-to drug" for bipolar II, evidently very common off-label use.  I don't know how she knows, whether she read the research, whether the medical journals have been flooded with articles commissioned (or maybe not) by GlaxoSmithKline, whether she heard about it from other doctors who are on (or maybe not on) GlaxcoSmithKline's payroll, or whatever.  It is also on the top of her list for treatment-resistant unipolar depression.  I am not expressing doubt about Lamictal's effectiveness.  I am simply explaining how off-label use works in clinical practice.

So we are currently at Mile Marker #5.  Now we start climbing that hill to #6.  Just like they did with tricyclics and SSRIs, everybody is asking, "How does Lamictal work?"  They think it has something to do with calcium, but I won't go into that here.

The answer to the "how" question is particularly important to the other pharmaceutical companies, because they will use the answer for a grab at their market share, by trying to improve on the side effect profile.

Lamictal's side effect profile isn't so bad, as far as mood stabilizers go.  It is light years better than Lithium, which is beyond nasty, but desperate people take it, because it has been their only relief.  Lamictal also is not so bad compared to antidepressants.  It causes fatigue, headaches, muscle pain, but not in as many people.  Its big drawback is this pesky rare (but potentially fatal) skin rash.

Potentially fatal.  Wow.  Now, one in 500 people get this rash, and all you have to do to get rid of it is stop taking the drug.  I am not sure why this rash is the major concern about the medication.  Except there is no denying the cause.  Antidepressants cause suicidal ideation and behavior at a much higher rate than Lamictal causes rash.  But try to prove it in your case.  You already have a disease that carries a risk of suicide.  And even on the antidepressant in question, it might be that your disease is simply progressing.  You are as likely to get your dose increased as discontinued.  And you will not get your day in court.  Lamictal causes some kind of rash in 1 of 10.  But even if your rash is caused by the new soap you are using, looks nothing like the bad rash, and even if you are free from suicidal thoughts for the first time in a decade, you get yanked off Lamictal.

So here is an excellent opening for other companies, to come up with something with no rash, or even a rash that only one in 1000 get.  We can expect other mood-stabilizers to reach clinical trial stage in the near future.  Ca-ching!  Ca-ching!

Mile Marker #7:  At that point, interests will align, of the pharmaceutical companies and those who have been misdiagnosed because of the not-yet-published but already dated DSM V.  The pharmaceutical companies are looking for Ca-Ching! Ca-Ching.  And depressed people are looking for better medications.  We finally reach the operation of the free market system.  This is the United States of America.  Fortunately for depressed people, there are enough of us to make it profitable to treat us.

So the task of the drug reps will be to direct doctors to the research demonstrating:
The true conservative treatment course might be to treat all depressive people with mood stabilizers, unless the doctor has time to sort between those with genuine unipolar depression (presenting their first episode and no history of anything that looks even slightly like hypomania) and those who have recurrent depression (or "cycling" depression), especially when Lamictal and future mood-stabilizers have better side effect profiles.  First do no harm.

If the meds work, if they increase their makers' market share, then the pharmaceutical companies will continue to find ways to do their own education of doctors, including education in how out of touch the DSM V is with clinical practice.  These same market forces will make irrelevant the DSM's refusal to define a diagnosis for pediatric bipolar.  If the meds work, children may receive a nonsensical diagnosis, but they will also receive the appropriate medication.

But our health care delivery system is already broken, and will collapse anyway, long before we reach Mile Marker #8. 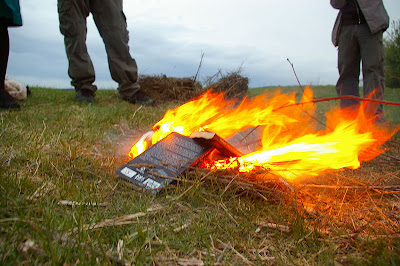 sign at Goose Creek Trailhead photographed by Steven Bernard
in public domain
photo of Lamictal by Parhamr and in the public domain
money bag from Microsoft clipart
"Book Burning" is licensed under the  Creative Commons Attribution 2.0 Generic license.
at March 06, 2010