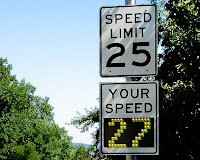 This traffic monitor should read YOUR SPEED 60 MPH.  But I couldn't find that image.  I suppose creating it would not be a good idea.  So this image will have to do.

If you are traveling too fast when you hit the pothole, you break your suspension.

So I am taking a break while we try to balance the GAMA and glutamate in my synapses.  Here is a slightly modified rerun of an oldie but a goodie.  I think it addresses the current phenomena of the Tea Party, the growing rigidity of those whom it threatens, and the retreat of the rest into reality tv.  If I didn't make so many connections like that, my brain wouldn't hurt so much.  Then again, Prozac Monologues wouldn't exist.

John McNamany put the thought into my head, the New York Times tickled my fancy and a blog new to me gave me the art work.

Function of the Anterior Cingulate Cortex

Finally, it's Anterior Cingulate Cortex Week!  This lovely portion of the brain is found in the limbic system, located just above the center, about where Iowa would be and extending into western Pennsylvania, if you flip the image so that it faces right, as I did here.  Like a true Midwesterner, the ACC modulates emotional response.  A hard-working manager, the ACC handles motivation to solve problems and anticipation of tasks and rewards.  It also monitors for conflict, things that don't make sense.  The brain is unhappy when it cannot detect a pattern.  Confronted with anomaly, the ACC goes to work.

"Researchers have long known that people cling to personal biases when confronted with death... In a series of new papers, Dr. Travis Proulx of University of California Santa Barbara and Steven J. Heine, a professor of psychology at the University of British Columbia, argue that these findings are variations on the same process: maintaining meaning, or coherence. The brain evolved to predict, and it does so by identifying patterns.

"When those patterns break down — as when a hiker stumbles across an easy chair sitting deep in the woods, as if dropped from the sky — the brain gropes for something, anything that makes sense. It may retreat to a familiar ritual, like checking equipment. But it may also turn its attention outward, the researchers argue, and notice, say, a pattern in animal tracks that was previously hidden. The urge to find a coherent pattern makes it more likely that the brain will find one." [Benedict Carey, New York Times, October 5, 2009]

To test whether confronting the absurd leads to pattern-searching behavior, they had twenty college students read Kafka, The Country Doctor, a story that is urgent, vivid and nonsensical.  Does anybody who is not in college ever read Kafka?  Anyway, after reading the story, they were given a task, to study strings of letters that did not form words.  They were then shown a longer list, and asked to find the strings they had seen before.  The letters did have patterns, very subtle patterns.  And the students who had read Kafka did better at this task than another twenty who had not been exposed to the absurd, 30% better.  With a Kafka-stimulated ACC, they were primed to find the patterns.

I wonder if that explains the college student's propensity to read Kafka in the first place.  Not to mention all those posters by Salvador Dali on dorm room walls.  The college student is at a crossroads, and has to puzzle through the animal tracks of his/her life, to discern the pattern, the call, the next direction.  These representations of the absurd stimulate the part of the brain needed at this developmental moment, just as caffeine stimulates the system before the exam.

I graduated from college at loose ends, with the Episcopal Church still discerning the patterns that would allow for the ordination of women.  That was a few years off, and I wasn't ready to commit to a vocation that might not be received.  But I didn't read Kafka.  Instead, I decided to read everything that Kurt Vonnegut had written up to that point, a modern day Kafka.  Kafka-lite, if you will.  Today, as I fill out disability applications, I am again at a crossroads, and again instinctively, am drawn to Vonnegut, whose body of work has grown since 1975.  Evidently I am stimulating my ACC and boosting my pattern/meaning/coherence finding abilities, priming myself to discern my next direction.

Patterns and the fMRI

Dialectical Thinking -- On Not Blowing Out Your ACC

This person loved me; this same person abused me -- two memories in conflict, absurd.  Put them together, they cause pain. They call it dialectical thinking when you hold two seemingly contradictory ideas in the same head at the same time.  But dialectical thinking is a highly developed skill.  Before anybody ever suggested to me that I could employ it to reduce my pain, I spent (and still do spend) enormous amounts of energy trying to make sense of events that were absurd.