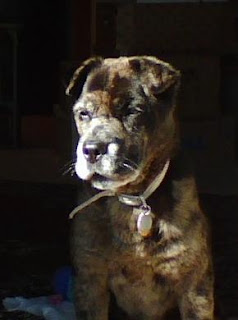 And in between she blessed us.

I wrote about Mazie a couple years ago.  She lived longer than we anticipated she would at the time.  She suffered a stroke a year ago, but recovered and went on to raise $250 in last year's NAMI walk.

Here is an edited version of that earlier post, with new bits in italics.


This dog reminds me of Mazie/Amazing Grace.  Except there are too many stars in the lower right corner of the constellation, a leg that she lost a long time ago.  Move those stars up to form her crown chakra.  For twelve of her thirteen years, people have watched her run and said, That's Amazing!

Mazie is a therapy dog.  Not officially, she never received the training.  Now she has renal failure and it's too late.  But everywhere she goes, she finds the person who needs her.  When I took her to visit the shelter during the Iowa floods in '08, she stopped to visit with each one.  After an hour, I was depressed and weary -- the start of another relapse.  I thought it was time to go.  But no, she pulled on the leash and told me she hadn't talked with that man who was isolating, sitting by himself under that tree.  And she had to hang around until the Red Cross worker got off shift, to share some grace with her, too.

People have to ponder a three-legged dog.  After a few years, I stopped making smart remarks to the same question I heard over and over. How did she lose her leg?  I came to realize that through her, people consider their own experiences of loss, and the consequences of loss, and the life she leads without even noticing her loss.

How did she come to be a therapy dog?  We don't know the before story.  We only know the after, the kindness of a farmer who went out of his way for an injured stray, a no-kill shelter that is very picky and does home studies before they let people adopt, a vet and staff who treat her as a queen, the strangers who are drawn to her and, I believe, bring their own need for gentleness to the gentleness with which they approach her.  And she responds in kind.

Will she get her leg back in heaven?  I don't think so.  On earth, her only handicap is that she can't pivot to the right at a full run without falling down.  I think her one wish for heaven is to lose the leash, so she can do what she loves to do, run like the wind in three quarter time.

I knew somebody who was born with a foreshortened arm.  It ended at the elbow with a stump of a hand.  She always bristled when some religious person reassured her she would be whole in heaven.  She said she already was whole.  And she was.

Maybe what heaven will fix is our lack of imagination.

What does it mean for those of us with mental illness to be whole in heaven?  All the life experience that makes us who we are includes the experience of mental illness.  Will we lose that?  Who then will we be?

All the loss in this world -- a friend is reading a midrash of Exodus.  In midrash, the rabbis explore the meaning of Scripture through story-telling, expanding and deepening the levels of the text.  In one interpretation of the burning bush, initially Moses refused the call to go free the Israelite slaves in Egypt because -- what about those who died while building the pyramids and were buried in the walls?  Who would let them go?

A psychiatrist once tried to reassure me about Electro-Convulsive Therapy, ECT.  She said that usually the only memory loss is of events immediately preceding the treatment.  And usually people are so unhappy before treatment that they are glad to lose those memories.

It was not a convincing argument.  Such an argument would be abhorrent to somebody who is Jewish.  I am not, but it is abhorrent to me, too.  To forget is to lose one's people and one's self.  I don't want to forget.  I don't want to lose any of it.  It is part of me, even the pain.  I guess I want for it to mean something.

No, I don't.  I don't want God to explain it.  I want to ask God to answer for it -- like the Holocaust survivor who insisted he be buried in his Auschwitz uniform instead of the traditional Jewish winding sheet.  He wanted to stand before the throne of judgment wearing the evidence that would itself say, who is judging whom?

Maybe what I really want, for Mazie, for those lost in the walls of the pyramids, and in the ashes, and for those who are in such pain that they want to lose their minds, for all of us, is to be found.