Project Implicit and the State of One's Soul

Remember, Dumbledore said to Harry, It is our choices that show what we truly are.

So did you do the homework?  Did you try any of the Implicit Association Tests?  Do you still want to read my blog?

This is how they describe what they are doing:

The variety of topics include attitudes toward age, race, disability, ethnicity, mental illness and others.  The tests are constructed to bypass thought, commitment, decision.  They dive deeper into what is known as the lizard brain, the part that evolved before reason, and that simply reacts, by setting one to tasks that have to be accomplished faster than the thinking part of the brain thinks.

Project Implicit is well aware that we may not like what we find in the lizard brain. I don't care for what I find in mine.  But it is important information, for two reasons.

I had a therapist once whose favorite quote was, The facts are friendly.  It is something to keep in mind when examining the lizard brain.

Me And My Lizard Brain

So here is how it works.  My brain receives some stimulus.  The very next thing that happens, my amygdala asks, Am I safe?  My hippocampus supplies memories of similar stimuli.  A quick trip up front to the anterior cingulate cortex, which says, I detect a pattern here -- not looking good.  My hypothalamus screams at my pituitary gland, Red alert!  My pituitary gland makes the call to the adrenaline gland, which starts pumping cortisol, speeding up heart rate, respiration rate, decreasing pain threshold, preparing muscles for emergency action.  These three make up the HPA axis.  There is a feedback mechanism -- the release of cortisol informs the hypothalamus that all is ready for whatever action is needed, and we can start thinking some more.

Me And My Rational Brain

Then the part of the brain that performs executive functions (frontal cortex) says, Wait a minute.  This stimulus conforms to the danger pattern only superficially.  Notice some differences.  Maybe we better gather more information.  The orbitofrontal cortex says, Slow down.  Don't do something you will regret for the rest of your life.

At that point, if I wait for that point, I can make a rational decision and take an appropriate action.  Society holds me responsible for my decisions and my actions, whether I waited or not.  I am not a lizard.  I am a human being.

Me And My Implicit Association Tests

The IATs examine the lizard, who we are before we have time to think and decide and behave according to our character.

I took a number of the tests several years ago, when I first read Malcolm Gladwell's Blink, and then when I assigned them in a program to train church leaders, to soften them up for our church's required anti-racism training. The race test revealed that I had a slight preference for white over black, which put me in the majority of people in the United States, having at least some level of white over black preference, though slight, not as much as moderate or strong preference.

You can't change your score with practice.  A friend of Gladwell's repeated the test every single day, and it never changed.  But in the early days, the Project included suggestions for other ways to change.  Their suggestions addressed hippocampal and ACC issues, though they didn't use that language.  Get to know people in the groups about which you have uncomfortable feelings.  Make friends.  Learn about cultures different from your own.  (Now they have a consultation service, and have removed the suggestions from the website.)

These behaviors change the memory, emotion and pattern recognition tracks laid down in the hippocampus and prefrontal cortex, and over time modify the information they feed into the HPA.  They are also tried and true strategies for changing the rational part of the brain.  People who have friends from among stigmatized and stereotyped groups exhibit less stigma and stereotyping of those groups.  Their experience teaches them that the stereotypes are inaccurate.  [The link is to an article about stigma toward people with mental illness.  Look to the footnotes for the many studies of stigma toward other groups.]

One day Gladwell's friend's score did change.  He thought about it, and realized -- one thing was different that day.  The Summer Olympics were on.  The night before, he spent four hours watching track and field events.  The next morning, he associated black with beauty, grace and skill.

In the years between my self-tests, I have made more friends, close friends who are African American, South African and Swazi, including, as I mentioned last week, young black men.  I have traveled outside the country.  I live part of the year in Costa Rica, in a real neighborhood, not a gringo ghetto, and interact daily with dark-skinned people of all ages.  I have re-learned Spanish.  Learning another language (or anything new) is an effective strategy for increasing the flexibility of ones brain and the quality of ones judgments.

So I was astounded, dismayed, confused, when this week the test result said I have a moderate preference for white over black.  I tried a few other tests, and found the pattern repeated, that tests where I once scored a slight preference for the dominant group, I now show a moderate (stronger) preference.

Notwithstanding how I began this post, claiming that our choices, not our reflexes, show what we truly are, my first thought was, But I am not a racist!  My next thought was to figure out why the test was wrong.  I thought, my reaction times have slowed in general over the years.

Well, a lot of other things.

My Brain Betrayed Me

In the intervening years, my brain went south on me.  We started with a diagnosis of Major Depression.  We moved on to Bipolar II.  Old anxiety disorders were reactivated.  I developed a number of cognitive deficits that led to my disability retirement.

When my former employers sent me to a three-day psychiatric evaluation, (they wanted to know whether I could go back to work), what I wanted to know was, What happened to my brain and how can I get it back?  I wanted a rehabilitation program.

The folk at the Gabbard Center said, The good news is, your brain problems are not organic.  They didn't call it bad news, but their conclusion was that my cognitive difficulties stemmed from my anxiety disorder, which they said, and I agreed, was the much bigger issue.  My rehab program includes unlearning rigid, automatic and sometimes inaccurate associations between dangerous then and not necessarily dangerous now, the hippocampus issue, and lowering my arousal rate in general, the HPA axis issue.

Given a genetic disposition, a trauma history and an over-worked HPA axis, the feedback mechanism eventually breaks down.  When the adrenal gland starts pumping out that cortisol, the hypothalamus never gets the message to stand down.  Red Alert becomes the new normal.

Well, Red Alert takes a lot of energy, and the brain has just so much of it.  On an hour to hour basis, my lizard brain sucks up more than its fair share.  I won't go into details here, the amount of time my brain spends looping through traumas that should not be so big a deal.  Managing my symptoms is my day job.  And I work a lot of overtime.

So like a computer that has some trojan program running in the background, sucking up all the RAM, my thinking brain cannot correct my lizard brain as quickly as it once did.  That is what the IAT tests test, the amount of time it takes to override our cultural programming.

Researchers have long known that people cling to their personal biases more tightly when feeling threatened.  After thinking about their own inevitable death, they become more patriotic, more religious and less tolerant of outsiders, studies find.

I covered this New York Times story back in November, 2009.  It applies here.  The anterior cingulate cortex needs to find meaning.  That is its job.  When confronted by something that doesn't make sense, it does one of two things.  It gets creative, finding a pattern that transcends what it used to know.  For example, upon seeing a young black man in a gated white neighborhood, the ACC could create, The colors of the rainbow, so pretty in the sky, are also on the faces of people passing by... What a wonderful world.  Or instead, it clings more tightly to what it thinks it knows.  For example, A young black man in a hoodie is on drugs, like on those cop shows I watch every night.

Give the HPA axis too much work to do, and there isn't enough energy to be creative.  In my case, the amount of time I have spent with a life-threatening illness has made it more difficult for me to exercise my preferred option, What a wonderful world.

So, I should not carry a gun.  I might make a mistake, a really bad mistake.

I am not alone.

Immediately following 9/11, everybody reverted to comfort and safety-seeking.  Sales of candles, board games and mashed potatoes went up.  It has become incredibly difficult to avoid arousal of the HPA axis. 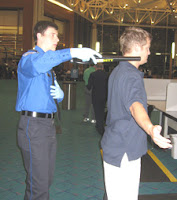 You are more anxious than you used to be, too, unless you work at it every single day.

This is not about your character.  It is about what happens in your amygdala, the nanosecond after you see something you do not expect, or someone different from you, and how long it takes your brain to return to a rational state.

Your character is about how you decide to behave anyway.

Gladwell addresses hyper-arousal in a law enforcement issue, the high speed chase.  Many police departments have banned them.  We tend to think the reason is to protect innocent bystanders from injury.  There is another reason, as well.  The chase ramps up the cortisol in the brains of both the pursued and the pursuers.  Police officers are prohibited from pursuing at high speeds, because the pursuit itself interferes with their own judgment.  Whatever happens at the end of the chase carries a higher risk of violating police procedure and resulting in actions that the police officers themselves will regret for the rest of their lives.

Stand Your Ground -- NOT!

We circle back around to Trayvon Martin and George Zimmermann and the laws in almost half the fifty states that allow civilians to carry arms and, when confronted by what they think is a life-threatening situation, instead of withdrawing, to shoot to kill.

Before you decide to carry a gun around with you, while you have time to choose what you really are, try the Weapons IAT.

I don't know, as I said, what happened that evening when Trayvon Martin was carrying a cell phone and George Zimmermann was carrying a gun.  I do know that police officers train all the time about how to handle situations that appear dangerous.  Because under those situations, it is difficult for our brains to work well.

Our brains were not built to make good decisions when we are scared and are holding a gun.  We need to know our limits.  We need to protect ourselves from making terrible mistakes.

That's what I think.  And the brain science backs me up.