Stages of Grief and Climate Change

In 1969 Elizabeth Kubler Ross published On Death and Dying. It described the grief process of dying patients and how family and medical personnel could help them toward a good death.

You probably know what came to be called the stages: denial, anger, depression, bargaining, acceptance. They were never intended to describe a straight line process, more like a series of way stations to be visited on the way. They came from her work with people who were dying, and were part of the foundation of the Hospice movement, to take dying back out of the hospital where the focus is on preventing death, and put it on a more humane basis. We all die. Let's do it without the violence of extreme measures.

Kubler Ross has been on my mind lately, as it becomes clear that the planet is dying. We all are dying. But so are the polar bears, as a species, the black rhinos, the bees... And when Monsanto kills off what remains of the bees... We are facing the sixth mass extinction of the planet. Unlike the earlier five, this one is on us humans. And evidently we have eighteen months to turn it around.

No, that BBC report was written last month. Make that seventeen months. The rest of the planet is addressing that deadline, while the US is set to spend the last months we have to make a difference locked in our own coming storm. We have one last chance to prevent a white nationalist totalitarian regime. The issues are tied, fascism and climate change, since the regime is doubled down on a nineteenth century energy policy. So, there we have it. We are screwed.

I am seeing those stages play out in social media and every day interactions. How about you?

I don't mean the old white guys who have a financial interest in denying climate change. I mean the determined optimism of those who still believe in the last minute reprieve. "Science will solve it." Science did solve it, years ago. We ignored them.

Do you think maybe Marvel Comics has tapped into the denial zeitgeist? Our obsession with comic book heroes testifies to our continued expectation that just when the game appears lost, somebody else will save us. Maybe that girl from Norway...

Ouch - right? You don't have to read the nightly body count. Look no further than your Facebook feed.

Somebody started a thread with Birdcage gifs. Here was my contribution:

Do you have people who pre-irritate you? I do. Before they open their mouths, I already feel irritated. Maybe we have eighteen - no, seventeen months on climate change. But have we already passed the tipping point on anger? Angry at all the angry people around us - how do we reverse that one?

A quarter of us in the US are on psychotropic meds. That doesn't count all the self-medicators out there. This is the golden day for legal marijuana.


I think this is what the straw fetish is about. We sit in our SUVs at the fast food drive-through, motors running, and berate the poor kid who handed us our beverage with a plastic straw. Like, if we give up our plastic straws, we will dodge the bullet.

In Kubler Ross's original idea, with acceptance comes peace. I don't really see any peace about the death of the planet out there, nor in here. The closest I come is acknowledgement. That's the word I substituted years ago in the Serenity Prayer, when acceptance carried just too much baggage. God, grant me the serenity to acknowledge what I cannot change.

But these predictions of demise are not for the short term. The seventeen month deadline is for the tipping point. After that, carbon levels will be so high there's only one direction to go. The melted polar caps don't freeze up again, (90° in Anchorage on the 4th of July this year), the icebergs disintegrate, releasing more carbon into the atmosphere, raising the temperature more rapidly, causing ocean levels to rise. Salt water is already infiltrating fresh water aquifers, destroying arable farm land and causing water shortages...

What with environmental refugees, starvation, and the inevitable military responses, civilization is finished thirty years from now. Some say twenty. The thing about these predictions, the only mistakes the predictors make is to predict we have more time than turns out to be the case.

Even so, in the face of environmental refugees, starvation, water shortages, and military intervention, twenty years is a long time to stand on one foot, pulling off that serenity thing about a good death.

We need another stage.

David Kessler, Kubler Ross's coauthor on a later book provides one in Finding Meaning: The Sixth Stage of Grief.

I walked into my therapist's office last week after a month's absence and caught her up. "The book is going great. If it weren't for my existential despair, my life would be terrific." This was pure gift to her. My issues are usually cognitive therapy issues. But she says she does existential therapy. "Maybe ultimately there is no meaning. Maybe you have to find your own."

Well, there's plenty of that going around. From Trump as the Second Coming to Paul Ryan's blatant embrace of Ayn I-don't-owe-anybody-anything Rand (he's a Catholic of all things!), to Spiritual-but-not-Religious, to tattoos, to My Family is Everything and the Only Thing, to... 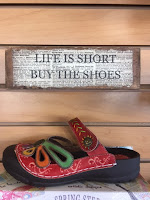 I just took this photo on a walk which included a sample of CBD tincture (self-medicating) and a swing by my favorite shoe store. They're red! They're mine! What does it matter that my portfolio is predicted to carry me to my end-of-retirement date, when my end-of-retirement date is anticipated to be later than the end-of-civilization date? Life is short, buy shoes.

So I choose a meaning. The family of God. As we all go down the tubes, I want to go down together, loving my neighbor as myself, welcoming the stranger, protecting the widows and children. Not the new-fangled heretical Christianity. Give me that old-timed religion, the Biblical Judeo-Christian thing that the Muslims embrace, too. It's not about power. It has stood up to Pharaoh, to Caesar, to Hitler. It will stand up to what comes next.

Sounds nice, but it's not about being nice, is it. For at least two thousand years, choosing a meaning that goes deeper than the embrace of power, choosing to stand with the dispossessed, the meek in the language of Jesus, has given people something to die for. Not kill for. Die for. To pull that off is going to take the energy I have left, and more. It will take a community of people to support such a decision - to be willing to die. I don't know what you call it. In my shop we call it the Body of Christ. It will take the Body of Christ to be the Body of Christ, broken together. Together with our nonChristian sisters and brothers, too.

Damn, this ended up a sermon. Well, here's the bottom line. If we're all going to die, I don't want to be an asshole.


Captain Marvel image from pyramidinternational.com
Birdcage gifs from giphy.com and tenor.com
dove icon in the public domain
flair from Facebook.com
photo of shoes by author