The Brain Science of Caffeine

It's Pumpkin Spice Latte Season -- what better time to pour a cup of Caffeine: Neurological and Psychiatric Implications? It's the next up in my PsychiatricTimes.com Appreciation Month.

Sergi Ferré, MD, PhD offers this continuing education course for doctors and other health care providers. The goal of this activity is to provide an understanding of the mechanisms involved in the innervating effects of caffeine and the impact that caffeine may have on psychiatric disorders.

So settle in to learn about your favorite beverage.

Disclaimer: Though I have read the thing many times and looked up many big words, I cannot honestly say that I have satisfied all of the learning goals. Specifically, I cannot:
nor
Good thing I don't need the grade.

Nevertheless, I gleaned a few fun facts which I will share with you.

Caffeine is the most commonly consumed psychotropic drug in the world, used primarily for its psychostimulant properties on the central nervous system. Yes, I think we already knew that, but it's nice to begin with a softball.

How does it work, you ask? They have been asking for a long time. The latest thought is that it has something to do with adenosine receptors. Adenosine is a neurotransmitter that wants to put you to sleep. Caffeine keeps adenosine from getting the job done by blocking the receptor point for adenosine.

Cornerbacks, that's it. For all you football fans, caffeine is like cornerbacks! For insomniacs, falling asleep is the touchdown. Adenosine is the football. Caffeine blocks the receiver, aka, the adenosine receptor, from catching the adenosine football to carry it over the goal line, your downy pillow.

Here it is more detail and pictures:

There is another step in here that has to do with that dopamine and glutamate. And I do understand it, sort of. But not well enough to explain it -- that's beyond my pay grade.

Moving on -- Caffeine dissolves in both lipids and water and hence spreads rapidly through the whole body, including the brain. Its average half-life is 2-6 hours. That means that at two hours, its effect is cut in half. But if you are on the six hour end of the spectrum, half of that cup after supper is still in your system well past your bedtime. Good time to meditate, I suppose.

Various things interfere with the effectiveness of caffeine. Smoke of any sort increases a liver enzyme that metabolizes caffeine. So firefighters have to keep chugging to get an effect. Pregnancy, on the other hand, a high estrogen state can increase the half-life up to fifteen hours. It's hard enough to sleep with that six pound bundle of joy kicking your kidneys -- skip the caffeine. The SSRI Luvox shoots the half life through the roof. Mmm, could contraband Luvox replace meth?

That bit about adenosine-dependent modulation of striatal dopamine, one of the learning goals of this course, actually, I do kind of understand it. It means roughly that caffeine is its own reward. You drink it, you love it, it revs up the dopamine, the neurotransmitter that both rewards you and leads you to pursue more reward. Here is a link to the post I already wrote about why you sell plasma to support your Starbucks habit. 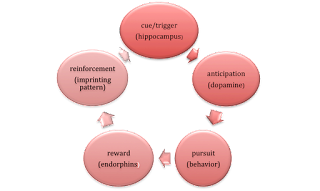 I happen to be very proud of this graphic I created to illustrate that blogpost. It's how we get those memes that promise to shoot you if you take away my coffee.

Classic psychostimulants work by increasing dopamine. Caffeine works differently, again by its cornerback function. Adenosine is the spoiler, blocking dopamine. Caffeine takes out the adenosine and lets the dopamine run riot, pursuing reward, inhibiting the freeze/withdraw/escape from punishment function of the amygdala. This is when you order the chocolate volcano cake to go with your post-dinner cup of coffee. Gonna meditate the whole night, aren't you. 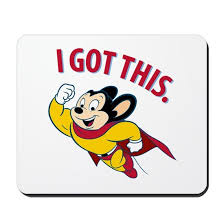 Let's bring some anxiety into this discussion.

Short version: that first cup hits the fear extinction part of the brain and puts hair on your chest.

The second hits the Are you nuts? Danger, Will Robinson, danger part of the brain and raises anxiety. I think it's a different brain systems, different threshholds of activation thing.

Don't take my word for it on dosage levels, by the way. Individual results may vary.

However, much work remains to be done... particularly in relation to the psychiatric implications.

In the Episcopal Church, my other biz, this is the equivalent to Go in peace to love and serve the Lord.

Then it's time for Coffee Hour.