Giving Thanks for John Moe

John Moe begins every broadcast of The Hilarious World of Depression with that question. Then he and the comedian/musician/celebrity of the week talk.

My therapist told me about Hilarious World. I was preparing to do a seminar, OK2Talk about Mental Illness, eight hours total, five segments.  The third would be on humor. It is, after all, part of the Prozac Monologues brand.

I discovered at Hilarious World a whole world of comedians, telling their stories of mental illness and often being funny in the process, Margaret Cho, Baron Vaughn, Aparla Nanchurla... Many were new to me. I do not have enough comedians in my life. Many episodes inspired me to search Youtube to watch these folk performing. 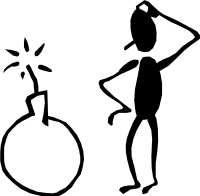 My own presentation did not go as well as John's invariably does. Well, I presume he edits. My group didn't give me enough material to edit. My career as a comedian was officially launched that weekend when I bombed. Boy, did I bomb.

I could have anticipated the coming disaster the first night when I asked people to write on the whiteboard words that they used for mental illness when talking about ourselves, not in public, mind you, but just among us. Turns out half the group were paraprofessionals in the looney biz, and looney was a word that was NOT OKAY. Official diagnoses, only, thank you very much. 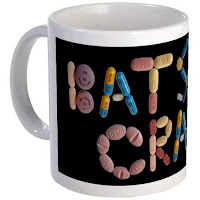 So I kept my batshit crazy t-shirt in my suitcase that weekend. Sigh.

Side note: you can get your own batshit crazy t-shirt, mug or bumper sticker, or items expressing other similar sentiments at CafePress.com. They are designed by Jerod Poore. You'll learn more about Jerod next week.

Foolishly, I plowed ahead. Is mental illness funny?

God, why did I play that Youtube of Maria Bamford's hospital stay? I thought it was hysterical.

Not quite crickets this time. My best friend in the class fled the room.

(It's been taken off Youtube. But here is Bamford's Hilarious World episode that describes it.)

Next I handed out red noses. That was good for two minutes. I decided to call it quits early. But it was still way too early to quit early. We filled the rest of the time with Laurel and Hardy videos.

But John will make you laugh. I really hope he will, because laughter is the best medicine. (Jerod sells a shirt that says medicine is the best medicine...) If you read Prozac Monologues, I presume you could use a laugh. It doesn't replace medicine, but it makes it go down better.

Early in the podcast's run, John sat down with Ana Marie Cox of ... During their conversation, John described the origins of Hilarious World. We started our podcast about depression and I thought... Oh it''ll be fun. I did sort of look at what was in my mental pantry that I had available to work with... I know a lot of comedians and I'm depressed. Let's see if we can make a pie out of that!

Here for me is the kernel. In my other biz, ministry development, I use a phrase, You already have everything you need to do what God wants you to do. So what does God want you to do? The answer will be found in your asset inventory.

After disability ended my ministry development career, what I had left was: a curiosity about how and why exactly my brain had blown up, a Reed college education, a computer, a way with words, and a sense of humor. And a batshit crazy t-shirt. The words were a little wobbly until I gave up on Lamictal, but I also had lots of time to search for them.

Out of that list came not Moe's pie, but my Prozac Monologues, first the blog and appearing next August the book.

John Moe's book is already available in pre-order from your local bookstore through indiebound.org or Amazon.com. The book comes out in May, but authors love pre-orders. If you could use a laugh, go for it.

Thanks, John for making me laugh.


banner from HilariousWorld.org
clipart from Microsoft
mug from CafePress
book jacket from indiebound.org
at November 14, 2019