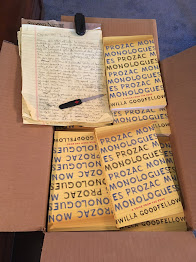 Fifteen years! From the hypomanic first draft of Prozac Monologues on a yellow legal notepad to a published book, and the nail file that inspired it all.

The book was officially released into the wild this week and will be celebrated in two launches, one sponsored by Paulina Springs Books in Sisters, OR, and the other sponsored by Prairie Lights in Iowa City, IA.

It's a good time to talk about gratitude. Forgive my self-indulgence. It is a day to reflect.

First, people have asked whether it was hard to write about such dark times in my life, if it retriggered some of those emotions. Occasionally, it did. Occasionally I would have a sleepless night remembering, in particular, difficult encounters in treatment. One can forgive sincerely. One can forgive over and over. Still, the brain remembers. I don't harbor resentments, but I can't always hop off the time travel machine that is my brain, how it repeats the tracks laid down by past traumas.

For the most part I kept that time machine in idle with two techniques. One is reframing, putting the experiences in a box and pronouncing the "Riddikulos!" spell over them, transforming them into humor. It has to be outrageous humor, not a simple chuckle, performing the spell like I mean it. And I do. Prozac Monologues is, frankly, hilarious.

The second technique was to place myself even further outside the frame by refocussing on exactly the right word in exactly the right position in exactly the right sentence. I practiced my craft. These experiences became the raw material on which I performed the writer's magic.
But there were other experiences in those fifteen years that I could allow myself to experience fully, feeling fully -- gratitude.
The doctor who tried so hard to help when nothing was helping -- she even took the risk of talking to an irritable priest about prayer.
The therapist who changed her dinner plans in a heartbeat when she saw the look on my face. 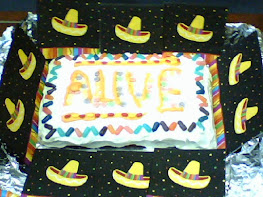 The psychiatrist who showed up for my guerilla party to celebrate suicide prevention week held in the hospital lobby. Complete with cake. And boy, what a cake!
The psychiatrist/researcher/professor/writer/mensch who has engaged with me and my work, supporting and promoting it when he agrees, taking it seriously even when he does not.
The publisher who believes in this book, whose own life mission is to give voice to writers whose stories need to be heard.

My wife of twenty-four years. Oh my gosh, what can one say about the ones who say the words, "For better for worse, in sickness and in health" and then stick around to keep those vows?
Batshit Crazy Support Group, where I had permission to speak the unspeakable.
Batshit Crazy Book Club -- oh, the places that our books take us!
I could go on for a while. I will go on for a while. But I will end this post (not the gratitude) with:

My dear sweet Mazie. Sometimes she knew she needed to pull me into a faster pace on our walks to improve my exercise. Sometimes she knew that my depression was too deep, that creeping was the best I could do. So she adjusted her pace to mine. And always she provided a gentle way to interact with others in the neighborhood.
Amazing Grace -- her full name was inspired by what everybody said when they saw her run, "That's amazing!" Mazie had three legs. She didn't need a fourth. She ran like the wind. She came to us that way, a stray.
We both were lost. I am so grateful that we both are found.
photos by author
at August 28, 2020