Prozac Monologues at the Movies 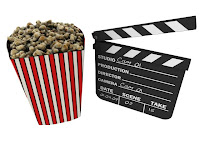 Oh, boy!  Butter up the popcorn, slip in a dvd, relax.  This is one very safe and friendly way to spend time with people during the holiday season, and my final installment of this year's Prozac Monologues holiday survival series.  I want my doc and everybody else to notice the implication, that I will survive to do another series next year.

Well chosen movies can fill time, avoid awkward conversation, provide common ground and keep you in the present, always a good thing for the mentally interesting.  Here are my selection criteria for holiday diversion movie viewing:

Gay people used to make the mistake of coming out to the whole family over some holiday.  Don't spring your new diagnosis on a crowd.  Trust me, it won't go well.  Family viewing is no time for controversy, education, or consciousness-raising.  So even though The Soloist is a fabulous introduction schizophrenia and how to treat those who have it with dignity, save it for the right moment, when the person you want to watch it with can give it the attention it deserves, like, when it is not followed up eggnog and cheese ball.

Instead, head for the Christmas classics, A Christmas Story, How the Grinch Stole Christmas, It's a Wonderful Life, A Charlie Brown Christmas, Mister Magoo's Christmas Carol, Polar Express. Don't you wait all year to see them again?

No?  Then move along to another genre --

When what you want is a way to be in the same room with people who are getting on your nerves, go to another universe.  Harry Potter, Lord of the Rings, Star Wars, Indiana Jones -- nineteen choices right there, and all guaranteed to get you into a different world than the one you are avoiding.  There's also Sherlock Holmes and Imaginarium, in theaters for Christmas, if you are going out for your movie viewing.

This is another version of ESCAPE.  Most movies about sport are fantasies, even when actually true.  Invictus is currently in theaters, and gets a high recommend from me.  It's about rugby, which is pretty traumatic to watch, so will satisfy the vicariously violent in the crowd.  It's also about Nelson Mandela, for the idealists -- great crossover appeal.  Others on dvd: Cool Runnings (bobsledding), Field of Dreams (baseball), Seabiscuit (horse racing), The Hustler (pool), Chariots of Fire (track).  Oh, let's include Butch Cassidy and the Sundance Kid (bicycling, swimming, horseback riding, bank robbery?) and Sound of Music (yodeling)!
The Brain On Humor

Laughter is the best medicine.  In brain science language, we're talking about "nonserious social incongruity," which already sounds funny.  The definition suggests the anterior cingulate cortex, one of my favorite brain sites.  But humor excites many different sites.  If you are interested in the science, see Functional Anatomy of Humor: Positive Affect and Chronic Mental Illness.  They actually did research on funny movies in the psych ward.  The results suggest they might be just the ticket to reduce anger and improve social competence within your family of origin.

Among my favorites are Up, Singing in the Rain, Jumpin' Jack Flash, and anything with Steve Martin.  I asked my family, and they added California Suite, Tommy Boy, European Vacation, Ice Age (#3 now in theaters) and anything by Mel Brooks.  Not suitable for intergenerational viewing, but still a hoot: Burn After Reading.

Is mental illness funny?  Well, that would be the whole premise of Prozac Monologues.  I have a soft spot in my heart for another Coen brothers movie Fargo, which was featured in Prozac Monologues the book.  I try to bend my humor north toward Fargo.

I would be interested in your comments on this point.  I think it's a issue of laughing at or laughing with.  Watch these if the audience is sympathetic: The Dream Team, Harvey, You Can't Take It With You, Rain Man, Finding Nemo, Fifty First Dates.  Little Miss Sunshine is darkly hysterical (my favorite kind of hysterical), if nobody is going to freak over Steve Carrell whose wrists are wrapped in gauze.

And saving the best for last, Some Like It Hot was voted the best American comedy ever by the American Film Institute.  And by me, too.  Enjoy!