PTSD and the DSM: Science and Politics -- Again

Several weeks of what I call "swiss cheese brain" interrupted my series on PTSD.  Now with a couple posts in reserve and a two week cushion, I am trying again.  To get us back on the same page, here is a (tweaked) reprint of March 28, a history of the issue in the Diagnostic Statistical Manual and current context, to be followed by PTSD: The State of Treatment, and then PTSD: Hope for Prevention.

With the ongoing war in Iraq, Post Traumatic Stress Disorder -- PTSD is much in the news nowadays.  We can expect that to continue.

Nancy Andreasen, author of The Broken Brain, traces the social history of this mental illness in a 2004 American Journal of Psychiatry article.  The features of what we call PTSD have long been noted in the annuls of warfare.  More recently, in World War I it was called shell shock, and those who had it were shot for cowardice in the face of the enemy.  In World War II it was recognized as a mental illness and called battle fatigue.  Afflicted soldiers were removed from the front and given counseling designed to return them to battle within the week -- though there is one infamous story about General Troglodyte Patton who, while touring a hospital, cursed and slapped one such soldier for his "cowardice."

The DSM I, from the post-WWII era, recognized battle fatigue as Gross Stress Disorder.  It was removed from the DSM II in the early 1960s , when U.S. society was not regularly confronted with this cost of war.

Andreasen had the task of addressing Gross Distress Disorder again in the 1980s for DSM III, when veterans' groups wanted its return as Post-Vietnam Syndrome.  Given her experience with burn victims, Andreasen pressed for a more inclusive description of the illness.  Post Traumatic Stress Disorder entered the new edition, described as a stress reaction to a catastrophic stressor that is outside the range of usual human experience.

In both DSM III and IV, and now in the draft DSM V, the first criterion for PTSD is not a symptom, but an event.  The DSM IV widened the application to include events that are not necessarily out of range of usual human experience:  The person experienced, witnessed, or was confronted with an event or events that involved actual or threatened death or serious injury, or a threat to the physical integrity of self or others. In addition, The person's response involved intense fear, helplessness, or horror.  This criterion has been applied to a wider assortment of events, the traumas of rape, child abuse, auto accidents, earthquakes and even witnessing events not experienced directly.  David Conroy argues that being suicidal fits the description, and that those who have been suicidal may develop PTSD, as well.  The literature on suicidality, depression and PTSD notes that these three sometimes co-concur, but I have found no one else who considers that the threat of death may come from ones own self, a threat from which we cannot escape.

Andreasen expresses a conservative approach, Giving the same diagnosis to death camp survivors and someone who has been in a motor vehicle accident diminishes the magnitude of the stressor and the significance of PTSD.  Sally Satel, also a psychiatrist and a Fellow at the American Enterprise Institute puts it more provocatively, "We've dumbed down PTSD."  There is a false assumption, she added, that ''if something bad happens, people are damaged unless they talk about it.''

Perhaps the confusion about what we now call PTSD arises from the focus on the traumatic event.  The world has long known that war messes with soldiers' minds.  Other traumas are more individual and not so easily observed by the general public.  So similarities are obscured.  Common sense says that a death camp and an auto accident are of a different magnitude of trauma.  However, the differences become less obvious when viewed from the perspective of symptoms.  Each edition of the DSM has struggled with the differences and similarities, and each lurched from one direction to another.

This focus on some precipitating event runs counter to diagnostic criteria for other mental illnesses, where the symptoms are given priority.  In some illnesses, such as depression, it is widely accepted that experiences and environment play a role in causation.  Past attempts to diagnose depression by its source (reactive, meaning in response to an event, or endogenous, meaning arising from biological sources) have been abandoned as unhelpful, since biological processes are part of any depression.

People with similar circumstances do not necessarily develop the same illness.  And most people who experience even a significant trauma do not develop PTSD, or they have symptoms that are easily resolved.  So why do some experience intrusive memories, feel numb and avoid triggers for years after the original event?

As it happens, the same therapies, antidepressants, anti-anxiety medications and cognitive behavioral therapy are used to treat both depression and PTSD, suggesting that these illnesses may be similar in other ways.

In fact, the brain science supports the comparison.  Stress plays a significant role in both.  Neuroscientists are studying three biochemical changes in the brain that occur under severe stress and persevere past the stress. 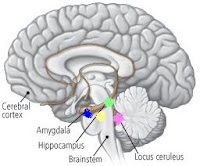 In addition, each of these systems feeds into the others.

These hormones are necessary to help the body deal with potential pain and danger.  Under smaller stress, feedback systems tell the brain to back off when the danger has passed.  However, an intense enough stressor changes these underlying brain functions.  It destroys the feedback systems and dis-regulates processes that otherwise right themselves and return the brain to a stable state when the stress has passed.

But what is intense enough?  It depends on the individual.  Those who perceive they have some control over the traumatic event are at less risk.  For example, a fire fighter has more resources and so more control than somebody else caught in a burning building.  The fire fighter would be at less risk for PTSD.

Adults who were abused, or who faced many extreme stresses in their early lives, are at greater risk for developing PTSD following later trauma than others who do not have the same history.  The brain science demonstrates that their brains have been primed, by damage to these critical areas of the brain.

Another finding reveals the original insight behind calling it shell shock.  Explosions send out waves of energy that can cause concussions, traumatic brain injuries or TBIs.  These physical injuries create the same neurological stresses as what are thought of as psychological stresses.  Even minor TBIs, in which there is only short or no loss of consciousness, set up the brain conditions for developing PTSD.  TBIs also result from blows to the head, as in an assault, flying debris or a motor vehicle accident.

These findings explain why individuals vary by the trauma threshold that can cause the brain changes and consequent symptoms, and why an event that most are able to shake off is devastating to a smaller portion of the population.  Just as "reactive depression" became an obsolete notion, perhaps it is time to stop defining the exact nature of the trauma behind PTSD and focus instead on the neuroscience.

In fact, a Walter Reed Army Institute study of 2,525 U.S. Army infantry soldiers discovered that minor TBIs are more likely to result in PTSD than severe TBIs with loss of consciousness for ten or more hours.  The theory is that PTSD comes from recording memories in a malfunctioning hippocampus.  Those who go in and out of consciousness, or remain conscious but are dazed, have more memories to be recorded, hence more memories to become intrusive at a later date.

At stake are billions of dollars, as diagnosis has increased exponentially, as the illness is asserted in personal injury lawsuits, as Viet Nam vets present themselves for treatment of "reactivated" PTSD, and as the war in Iraq produces more soldiers with more problems.

The scope of the problem from the Iraqi war is enormous.  From the Washington Post report of the Walter Reed study: Head and neck injuries have been reported in one quarter of troops evacuated from [Iraq and Afghanistan.]  The proportion of soldiers with concussion may be as high as 18 percent... Almost 44 percent of soldiers reporting an injury involving loss of consciousness met the criteria for PTSD versus only 27.3 percent of those reporting an injury involving altered mental status, 16.2 percent of those with other injuries and 9.1 percent of those with no injury.  A 2008 RAND Corporation study put the incidence of PTSD in soldiers who have served in Iraq at 13.8%.  Other studies claim much higher numbers.  [On May 14, 2010 USA Today released a Pentagon study announcing that hospitalizations for mental illness now exceed hospitalizations for other injuries, and involve much, much longer stays.]

Debate continues about how inclusive or restrictive the criteria for diagnosis should be, with the proposed DSM V drifting toward the more restrictive criteria, where the economics of PTSD converge with the politics.  Repeating Andreasen from above, Giving the same diagnosis to death camp survivors and someone who has been in a motor vehicle accident diminishes the magnitude of the stressor and the significance of PTSD.

There is, of course, another way to honor those whose mental illness is the result of war, in line with Andreasen's original insight.  Instead of their own diagnosis, we might give them a Purple Heart.


U.S. Army Soldiers attached to 3rd Squadron,
2nd Cavalry Regiment patrol and search for weapons
or Improvised Explosive Devices (IED) during a clearing mission
photo in public domain
at May 22, 2010