I can't stop thinking about... [some traumatizing thought.]

So think about something else instead.

Distraction is a basic Cognitive Therapy tool.  Personally, I think it's stupid on the face of it.  The point is, I can't stop thinking about what I am already thinking about.  I am stuck on this horror movie, and somebody stole the channel changer.

Except I can change the channel.  You can, too.  You can think about something else instead. 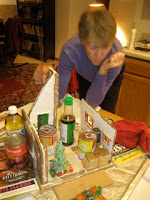 That diagnosable gingerbread house of mine worked just fine.  It changed my channel.  How weird is that?

Here's the deal.  I think it worked is because, just like that other channel, it was all-consuming.  I had to pay exquisite attention to those cans supporting those fragile walls, whether the walls would meet, whether the pretzels would break... 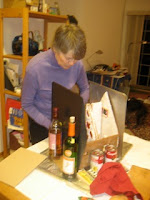 There was no room for a wandering mind on this construction site.  Gingerbread was my own personal Yoda, sitting on my shoulder, hitting me over the head any time my mind was not on where I was.  Like when I knocked over that nearly new bottle of single malt scotch holding up the back wall.  Balvenie, to be precise.

Matthew A. Killingsworth and Daniel T. Gilbert of Harvard University recently published a study on wandering minds and happiness.  The short version: a wandering mind is an unhappy mind.

“Mind-wandering is an excellent predictor of people’s happiness,” Killingsworth says. “In fact, how often our minds leave the present and where they tend to go is a better predictor of our happiness than the activities in which we are engaged.”

The researchers estimated that only 4.6 percent of a person’s happiness in a given moment was attributable to the specific activity he or she was doing, whereas a person’s mind-wandering status accounted for about 10.8 percent of his or her happiness.

The unhappy news: people spend 46.9% of their waking hours thinking about something other than what they’re doing.  That would be the average.  Me -- here and now is my worst subject in all the world.  This has something to do with a hippocampus the size of a poppy seed.  And yet so often it has that channel changer in a death grip.

Mindfulness is the non-judgmental observation of the ongoing stream of internal experiences as they arise.  Mindfulness acknowledges the hippocampus.  It just doesn't let it run the show.

Other parts of my brain deserve their say, as well.  My traumas are not here and now.  In any given moment, the odds are overwhelming that I am perfectly safe -- an objective fact. 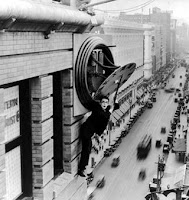 There are other objective facts, including that I was not always safe.  But that was then, this is now.  Remember, remember.  Keep a tight grip on this fact -- this is now.  This is when I need to focus on whether the roof meets the side wall or if there is a gap.

My misery comes from two things, then and the fear that then is next, with no room for now in between.  Like the Jewish joke, without guilt and dread, who am I?

But the odds of an unsafe event in the future are not overwhelming -- they are as miniscule as my poppy seed sized hippocampus.  My frontal cortex is perfectly able to calculate the odds. 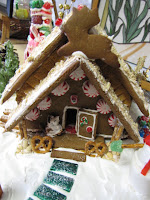 Here and now is pretty cool.  This exact moment is a gift.  And many good things are possible in it.

By the way, that prototype served its purpose.  It taught me a lot, including the fact that it was not possible to replicate it in the one week I had onsite. 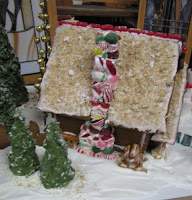 I did have a Plan B.  And not chained to my past aspirations, I decided to go to Plan B before, not after the meltdown.