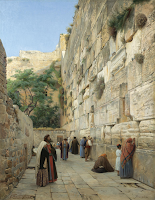 Once, when I was seriously under and still headed down, a friend said to me, There have been times in my life when I was sad, so sad I couldn't imagine being any sadder. But it seems that what you and others with depression are describing is a whole different level that I know nothing about.

See, that's what would be helpful, instead of, I know just how you feel. I remember when [fill in the significant loss]... I knew that he knew times of deep sadness, because I knew some of those times, and because he is a person is thinks and feels deeply. And listens deeply. Everyone should have such a friend.

It was Social Hour. We were in a corner to protect me from all those people being social. I leaned against a wall, because I was very tired. I guess the wall gave me the idea. I said, Yes, there are times I have been so sad I couldn't imagine being sadder. It's like the sadness became a wall I could lean against, because I was so tired. But Depression IS different. Imagine if the wall gives way. Imagine there isn't a limit. You lean and the wall gives way.


At the time, I was just beginning the chemistry experiment that would eventually conclude:

Then My Mother Died


So there we have a trifecta of potential disaster:

Is It Grief? Is It Relapse?

This is very scary. See above -- I can't take jigger my meds to make it go away. The meds I take don't make it go away. And most of the time that I can manage my symptoms isn't all of the time. So since January 14th, I have monitored my mood like it was a nuclear reactor about to blow.

There are four other DSM criteria for a depressive episode (psychomotor agitation, changes in appetite and weight, feelings of worthlessness, suicidal ideation). But these were the ones that hit me. Five, including both of the top two, enough for a diagnosis by a doctor in a hurry.

Plus I have some trauma-related comorbidity issues. So add:
And a mother load of anxiety. So to speak.

There I was, going through my mother's things, reading a draft of the will that will cause such pain and strain between siblings, trying to find important papers and a ring that had gone missing, sorting through pictures that reminded me of the sorrows in her life, reading the trauma in her own young eyes, sorrowing over the pain and disability of her last years... 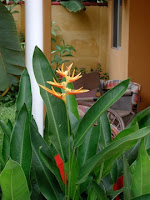 I looked up from my breakfast table one morning and realized I hadn't even seen this flower that greets me every morning in Costa Rica. It lasted just a moment, my recognition. Then my eyes clouded over, and I couldn't see the flower again, or hear the birds and the howler monkeys.

After two weeks, it was onto another flight, to the funeral in Utah.

Monitoring my mood like it was a nuclear reactor about to blow, I knew --

I was depressed; I was not Depressed

How did I know the difference?  Because the wall held. When I was tired, when I was raging, when I was lost, I knew -- my mother just died!  I leaned up against the sadness of it. What I felt was natural, normal, and passing.

A month after her death, well within the two month Bereavement Exclusion, the wall gave way. The depression became Depression, global, all-consuming, falling into the hole that has no bottom.

In true Depression fashion, the feeling of falling with no bottom led to the thought that I was doomed. There are no meds. There is no way out. Here I am again, years into therapy, years now with the right diagnosis and the right therapist, two therapists whom I trust, who double team me, chakra work on the left and cognitive behavioral therapy on the right.

It never goes away. It will never go away. This is the rest of my life, until I can no longer live it.

The Difference Between Grief and Depression

These are the guys who caused all the fuss, convincing the first draft of the DSM V to eliminate the Bereavement Exclusion. They might have caused less fuss, if there were a description in the DSM of normal bereavement. I am not sure why it isn't there, except that the DSM does not describe normal.

Nevertheless, the Bereavement Exclusion has to go, because time has nothing to do with it.

For the Popular Audience

Start with The Two Worlds of Grief and Depression. Pies says it is not about where to draw the line, where grief crosses over into depression. They are two different things.

Telltale signs that my grief occupied different psychological territory than my previous and later depression:


A month later it was different:


Treatment And Meds Are Not Necessarily The Same Thing

This is where the psychiatric community is stuck and where the story is distorted in the public understanding. Doctors have this auto-prescribing reflex: If it's in the DSM, a pill will fix it. But antidepressants have serious side effects. So you don't want to make a mistake and give them to people who don't need them, like people who are going through a normal grieving process that only looks like Major Depression to the doctor who has fifteen minutes before the next patient.

The real problem is the prescribing practice, not the risk of false-positives in diagnosis.

I needed treatment. I am getting it. Though I wanted to quit therapy, though it is a struggle to make myself go, I am going. I am walking, 1-4 miles/day. I am going to support groups, and making myself tell my story, and getting support. I am not trying new chemistry experiments.

In The Anatomy of Sorrow: A Spiritual, Phenomenological and Neurological Perpective, Pies expands on his description of the overlapping but distinct worlds of grief and depression in relational, temporal, dialectical and intentional realms.

It turns out, the neurocircuitry of grief and depression are different. Some day brain doctors won't read tea leaves. They will actually do diagnostic testing, like heart doctors and lung doctors.

But gee, just as I get to the fMRI's, I run out of room and out of week.

Brain Science of Bereavement To Be Continued...

Grief? Depression? Both? January 28, 2012 -- The contexts of DSM revision debate over the Bereavement Exclusion: health care costs, the DSM and the inadequacy of symptom silos, the mind/brain debate, poor health care for the bereaved.
Grief/Depression II -- Rise in Rates of Mental Illness February 16, 2012 -- More context: stress and big pharma. This post begins my correspondence with Dr. Sidney Pies.
Grief/Depression IV -- Not the Same/Maybe Both March 1, 2012 -- Biomarkers for depression and grief.

Painting of Wailing Wall by Gustav Bauernfeind (1848-1905), in public domain
flair from Facebook.com
photo of Bird of Paradise by Helen Keefe, used by permission
at February 23, 2012