No Pink Ribbons - On Truth-Telling

I don't do the pink ribbon thing.

I was sitting at a sushi bar, watching a football game last month, and noticed the pink shoes and towels sported by both teams.  I mentioned that October was Breast Cancer Awareness Month.  Our server said he didn't know that, but pink is his signature color. 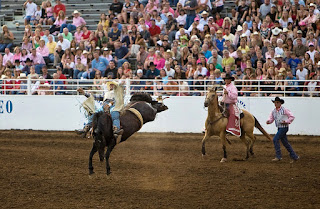 Okay, I think the Man Enough to Wear Pink phenomenon in football and Tough Enough in rodeo's version is way cool.  And a sweet young man in Idaho who owns that pink is his signature color would have to be More Man and More Tough than most.

But as a movement to define the struggle against breast cancer -- I couldn't put my finger on it, but something always seemed a little off.


My seminary friend who is surviving breast cancer confirmed my misgivings.  Currently Holly's blog, Ojo from NOHO is about living life to the fullest after the struggle.  I am happy to report that she is having a fabulous life.  Through her blog, I found another blog, Being Sarah, which continues to document what breast cancer is all about.  Sarah laid it bare in a post called, She Never Complained.

She Never Complained is an homage to Sarah's friend Rachel, who died of breast cancer.  Rachel did complain.  She complained a lot.  She howled.

Sarah writes about how people want to call them brave, while they make terrible choices to undergo terrible treatments, because they can't imagine not.  They are not brave, Sarah says. They are simply making a choice, a choice they have no choice about making.

It's America's favorite story, which is why it sells so well.  Kurt Vonnegut says that computers could write our stories.  They follow formulas.

Here he gives three formulas for the stories that sell.

The Pink Ribbon Campaign is all over this video.  Breast cancer decked out to fit the formula of the likable heroine to whom terrible things happen which she endures bravely while wearing her fashionable head scarves and perky pink ribbon until her eventual triumph over adversity.

But there is nothing fashionable about losing your hair and puking your guts out.  Going under the knife or not going under the knife doesn't take courage.  It takes a signature, made by somebody who may be angry or resigned or scared shitless or all of the above.  Oh, and health insurance.

And then you go to a support group.  These support groups are really the rage, because people who go to them have a better shot at survival.  It's wonderful to think you have some sort of control over this terrifying thing that is happening to your body, that you can do something.

And it is wonderful for everybody around you who is scared shitless for you to think that you can do something, because they want to believe that you will survive.  Of course they do.  They love you.  And me, I don't even know you.  But I want you to survive, too, have your own shot at Vonnegut's off-scale happiness.

The thing is, not everybody will.

Yes, breast cancer mortality rates have gone down since early detection, research that has made possible treatments that target specific varieties of breast cancer cells, the reduction of hormone replacement therapy, and that cultural shift when we stopped talking about stigma and started talking instead about cancer.  (But that last one is another post...)  In 2011 it was estimated that over 2,600,000 women were breast cancer survivors, while 39,520 were expected to die.

And I guess the Pink Ribbon Campaign helped.  At Tough Enough to Wear Pink days at the rodeo, they collect for Susan Komen For The Cure.  The 80,000,000 people with mental illness and 37,000 who died from it last year could use a few extra research dollars and some public imagination around the issue, too.

So all that is good for people with breast cancer.  But it's still not romantic.  It's not sweetness and light.  And it's not always enough.  39,520 times in 2011 it was not enough.  Even when the adversity seems to reach a happy end, those subsequent years of testing for evidence of disease puts a kink in that curve to off-scale happiness.

Now don't get me wrong.  Any and every time you ask me to sponsor you on a Walk for the Cure, I will pull out my credit card.  I will do that for you, whoever you are.  Send me the link. 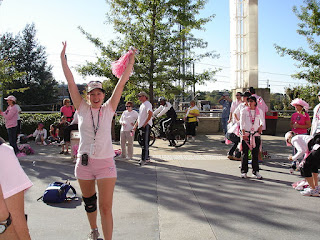 Because over in my corner of the miserable universe, I know what it's like to have people tell me I am brave for telling my story, I am strong for surviving my childhood, I am admirable for my advocacy.  I'll tell you what it's like to have people tell me those things.  It's lonely.  The burden of being brave and strong and admirable for you, even if you love me and are scared for me and want me to survive -- I don't need that burden on top of my own.

What I really need, what I covet, what I have to make secret appointments with secret friends to get is to put down this sham bravery, to wonder if I will survive.  To tell the truth.

The truth does not follow the arc of the American story.  It's way more sacred than that.  It's what I can offer, to tell it and to hear it.

And it's not pink.