Mood chart is one of the top search terms that bring people to Prozac Monologues. I wrote about mood charts in July, 2010, first as a recovery tool and later as a way to illustrate the differences between various mood disorders. Both posts promised sequels, promises that remained unfulfillable until now that I have spent several months doing cognitive remediation at Lumosity.com. Maybe cognitive remediation is worth another post -- later.

What is a Mood Chart


A mood chart is a way to track your symptoms and other relevant data systematically over time. 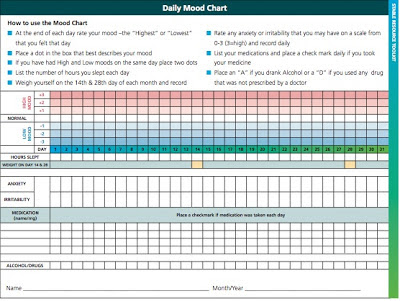 A couple weeks after my psychiatrist first prescribed a mood stabilizer, the chart above arrived in my mailbox, sent by Cigna, then my mental health insurance provider. My apologies that the image is not clear. You can see and print the original here. It's called Mood Charting in the Resources on Mental Illness section in the column to the left.

There are many versions and formats for mood charts. Yes, there's an app for it. Many apps, in fact. Google it and take your pick. Personally, I like the low tech version, the single sheet I can use as a bookmark in my bedtime reading. It is easier to interpret when it's simple, and more likely to get filled out when it fits the structure of my day.

This chart lets you see how your moods vary by whether you take your meds, get enough sleep and use alcohol or other substances. It also keeps track of weight gain, a common, serious side effect of meds that loonies take, and unresolved symptoms, anxiety and irritation, both suicide risk factors.

I took the timing of its arrival to mean that a reimbursement claim for mood stabilizers trips a trigger at Cigna. Since mood stabilizers are usually prescribed for bipolar, and a diagnosis of bipolar is news one does not want to hear, and so may resist, and resist taking the medications, the chart invites you to test the hypothesis of whether taking the meds makes a difference.

Now, about that diagnosis: the DSM sorts loonies by what psychiatry considers to be the predominant issue. People with schizophrenia have thinking disorders. People with depression have mood disorders.

Well, one of the symptoms of schizophrenia is distorted thinking; one of the symptoms of depression is extreme mood. The sorting system disguises the huge overlap between categories, even beyond the official overlap category called schizoaffective disorder. Actually, each disorder affects both mood and thinking, and more. But that is another post, or several, many of which have already been written elsewhere. Moving on... 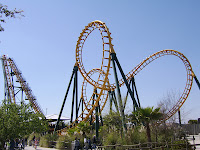 I was still diagnosed with major depression at this point. But the doc was moving the Chemistry Experiment into new territory (read: new class of meds). We were out of antidepressants to try. Meanwhile, the insurance company already knew my depression was cyclical, because my claims were.
The DSM currently breaks mood disorders into two types, major depression (of single event, recurring and chronic varieties) and what they call bipolar (I, II and almost-there-but-we-can't-quite-nail-it varieties). Referring back to that chart above, major depression stays in the blue or neutral zone, with only occasional trips into pale pink. What makes the bipolar call is the presence of highs, extended visits to the pink zone, in addition to the lows. Sometimes you're whale shit at the bottom of the ocean. Sometimes you're leaping tall buildings in a single bound. The difference between bipolar I and bipolar II has to do with the height of the building. The next edition of the DSM will maintain this distinction.

But it has been argued that distinction between cycling and non-cycling is more important than the height of the building one can leap. Maybe recurrent depression has more in common with bipolar than with dysthemia, the chronic low. The specific symptom (many of which occur in many different diagnoses) does not matter so much as the pattern in which it occurs.

Whatever the diagnosis, we gotta get me off the roller coaster. I'd settle for getting me onto the kiddie version. Mood charts provide data to demonstrate whether there is a roller coaster and what might be fueling it or leveling it out.

People with bipolar typically go for years with the wrong diagnosis, bipolar II even longer than bipolar I. Last week I suggested one reason for this, that doctors fail to use a simple screen for mania and hypomania, and fail to consult family members about the patient's symptoms, using the same screen. Usually they do screen. But they use their own language, which you don't learn until you have spent more time in their office than you care to, listening to it. The screen I recommend translates.

Another reason for delayed diagnosis is that people with bipolar (of any variety) spend most of our misery in a depressed state. If you show up for a med check at 10:30 AM, the second Tuesday of the month, once a month or once a quarter, chances are your doctor will not witness symptoms that cause any doubt in the diagnosis of major depression. Nor will you remember any such symptoms: mood changes, increased energy, speech disruptions, impaired judgment, changes in thought patterns. [You can find an expanded list here.] Nor will you recognize any of the behaviors described as indication of any problem. Doc, I've been breaking all my productivity quotas at work, having great sex, regained all my energy and then some, finally put that black dog behind me, and I'm on top of the world. What's wrong with me? -- said no patient in any doctor's office ever.

Who has time to read and interpret your journal before every doctor's appointment? 60 seconds every night, and I have the relevant data to remember and report. I take the pages with me. The doc takes them out of my hand and looks for herself. Now she can see how many days I really took that prn med and how much sleep I really am getting, in place of my vague mumblings.

However, I concluded that Cigna's chart was missing something.

What is most apparent, the big colored section is about mood, happy or sad. That is how people think of bipolar. The word itself suggests a binary state. It ignores all the other symptoms and how they interact with mood.

Remember that list of manic and hypomanic symptoms: mood changes, increased energy, speech disruptions, impaired judgment, changes in thought patterns. It's more than moods! You have to be really experienced and attuned to notice the last three in yourself. What was that therapist thinking who asked, Are you psychotic? I mean, how would I know?

But the real data to be mined is in the first two areas, mood and energy. Both cycle in bipolar. Monitoring energy levels is the earliest warning system for people with bipolar. We can catch episodes in time to intervene before the craziness comes out that others can't miss.

It's the energy cycling that reveals the underlying disorder, and also exposes the depth of pain.

That so-called high of bipolar isn't all it's cracked up to be. Oh, a dash of extra energy is everybody's dream, every boss's demand and every candy bar's promise, as long as it is accompanied by a good mood. In psych-speak, that's euthemic mania or hypomania. But its evil twin is dysphoric mania or hypomania, all that extra energy poured into bad mood.

That's the major trouble territory. The Whale Shit at the Bottom of the Ocean kind of depression sends you to bed, curled under the covers.  t's a lousy way to spend the day. But at the end of that day, when you are in that state, bed is safer than jumping out of bed.

Mixed states, depression with agitation, irritation, anxiety, impulsivity -- in other words, high energy with a negative focus -- there is the killer, literally. People with mixed states are at far and away the greatest risk for self harm, compared to people with depression and low energy and people with elevated mood and high energy.

Once I started Prozac, I kissed those happy, productive hypomanias goodbye. I never got into the pink zone. But I knew something else was happening. So I made my own chart. 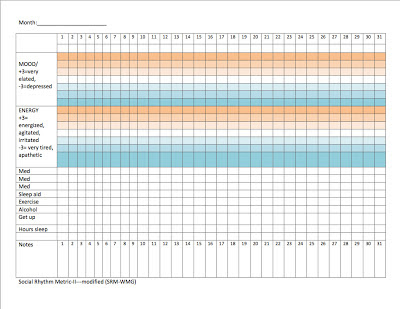 Again, I can't make the image as big as I'd like. I slapped up another blog, More Than Moods, so you could see it more clearly. There is a new link in the Resources on Mental Illness section called Mood Chart - Personalized that takes you to that blog.

I will continue with how this chart works for me and how it can work for you...