Basil the Great vs. Christina the Astonishing – Lent Madness begins.

Saints and Lent – is Prozac Monologues straying from its mission, reflections and research on the mind, the brain, mental illness and society?  Hardly.  First, note the Madness in Lent Madness.  Then wait ‘til you see the saints.

The forty days before Easter are traditionally a time to focus on one’s spiritual growth.  But there is a looniness built in from the start.  Ash Wednesday to Holy Saturday – count them – 46 days.  Oh yeah, Sundays don’t count.  Does that mean I can smoke and eat chocolate on Sunday?  Opinions vary.

And once you are debating whether you can smoke on Sunday (does it depend on what you’re smoking?), you have already leaned in the direction of madness.  Leaning, leaning…

Two Episcopal priests, Scott Gunn and Tim Schenck created a mash-up between March Madness and spiritual growth.  Every day in Lent, well, most of them, we are presented with a choice, Saint A or Saint B.  The case is made for each, bios for the Round of 32, weird stuff for the Saintly Sixteen, kitsch offerings at the Elate Eight, summations of the Faithful Four and campaign speeches in the final push for the Golden Halo.

Vote your favorite, but just once.  Comment if you care.  Do your best not to get nasty when others don’t take it seriously enough.

When an apostle goes down because some college turns out to support its most famous alumna, Lent Madness turns into an exercise in the spiritual discipline of restraint.  The Supreme Executive Council (Scott and Tim) cautions participants to take it in the spirit intended, or find a different discipline. 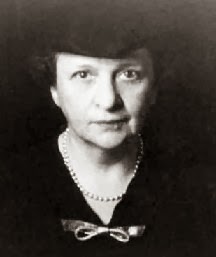 The SEC paused after last year’s kerfuffle when Frances Perkins, Secretary of Labor under Franklin Delano Roosevelt, creator of Social Security and child labor laws, and devout Episcopalian, defeated Martin Luther King Jr. and then went on to win the coveted Golden Halo over Luke the Evangelist, causing several of the electorate to fall into sin.  (But not me!  I think my mother was named for Frances Perkins.)

Loony enough for you yet?

So while this year’s bracket contains some major names, Johann Sebastian Bach among them, there are no apostles whose fans are easily offended.  First match-up – Basil the Great and Christina the Astonishing.

Basil was a fourth century monk, called out of the monastery to defend the Trinity.  Father, Son and Holy Spirit – you wouldn’t think They/Thou needed defending.  But the fourth century of the Christian Era was a contentious time.

And heresies do matter.  Back then they understood that heresies have consequences.  Heresies are about God, i.e., who and what is of ultimate importance.  Return on investment might be a current example.  Today we call heresies cognitive distortions.  They are so common, we notice them only among those who have a mental illness.  We label as mentally ill those whose cognitive distortions (or are they?) challenge the most common ones among us, like, return on investment. 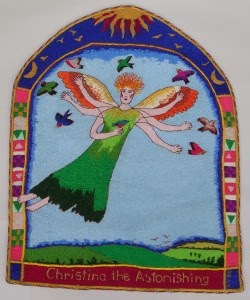 But Christina won my heart.  Christina was born in the twelfth century and died when she was twenty.  She interrupted her funeral by rising out of her coffin and into the rafters.  After the riffraff’s swift departure, she explained that the angels showed her heaven, hell and purgatory, then gave her a choice.  She could stay in heaven, or return to earth to do penance that would bring other souls out of their suffering.

So she came back.  She spent the rest of her life doing stuff like becoming homeless in order to reach the homeless.  She also spent a fair amount of time in trees, because she could not stand the stench of sin.  Her family didn’t know if she was a mystic or a nut, and broke her leg so she’d stay home.

Christina did not advance beyond the first round, which is just as well, because – what would the blogger have written for the weird round?

Patron Saint of Therapists and People with Mental Illness

But she did exceed expectation, garnering 45% of the votes, which tells you something about the Episcopal Church, or at least about the electorate, which includes whoever wants to participate.

My therapist friends went for their patron.  They saw in her a path to holiness that they can follow, sitting beside those who suffer in order to relieve suffering.  I like the kind of people who become therapists.

And me, well, what would you expect?  I am astonished only that I had never heard of her, having done the whole parochial grade school thing and taking visionaries for my role models.  Maybe the nuns at St. John in the Evangelist gave her a pass, because they, being Franciscans, were more into stigmata.  We’ve got one of those coming up in this year’s competition.  We will see how he does.

The Roman Catholic Church has never officially recognized Christina's status, though there is an active local devotion to her even today.

Another claims place as the RC Patron Saint of Loonies.  Dymphna wasn't born in Belgium, though it is where she died.  If you are a fellow loony and looking for a patron, go to Belgium.

The thing is, Dymphna wasn't one herself.  Her father was.  She died at his hand.  It is a sad story with a modern miraculous ending, a traumatized community that responded with compassion and systemic change that endures to this day.

My recent posts have engaged a cross-market readership with Psychiatrictimes.com, discussing the moral implications of suicide.  Conversing with these people, I have been way too heavy.  It is way time to join Christina in the rafters, because -- gravity kills.

Anyway, you can vote, too!  Go to Lentmadness.org.  But you can’t vote for Christina.  The bracket moves on.  John of the Cross is the one with stigmata.  Phillip Brooks wrote O Little Town of Bethlehem, and was closeted.  Lydia was a businesswoman.  Others I have never heard of in my life.  Will there be any more from the rafters?  Flight of ideas, anyone?  We’ll see…

photo of Frances Perkins by a member of the US Navy and in the public domain
photo of Ash Wednesday Mass at Saint Pierre le Jeune, Strasbourg copyrighted by Claude Truong-Ngoc at Wikimedia Commons
mosaic of Basil of Caesarea in public domain
needlework of Christina the Astonishing created by Cookie Scottern, used with permission
More of Scottern's art can be viewed at http://www.cookiescottorn.co.uk/
Dymphna's holy card is in the public domain