Any story worth telling is worth improving.

Richie had a fisherman's philosophy when it came to story telling.  He inspired, or provoked, or was co-conspirator in many of the Bar Tales of Costa Rica.  The following excerpt is my tribute to this cowboy/hippie/mystic who will be sorely missed.


There is one particular table at the Pato Loco where deals get made over American breakfast.  Mama, who has overheard a lot of deals being made, said, “It gets so you can tell the real ones from the ones who are all talk.  Paul, he never talks about his deals.  He’s one of the real ones.  But that Jerry who reneged on the house, you could tell he was all blow.”

“Jerry reneged on the deal?”  I felt badly for Jorge Milanes, if this deal fell through.  He has fourteen of his twenty-two houses sold, and Jerry was number fifteen.  But I don’t feel too badly, because I wasn’t looking forward to this blow-hard being Mama’s next door neighbor.  He’s one of these guys with a big chest, big because it’s full of hot air.  Bruce brought him down here, though Bruce was careful not to call him a friend.

“Oh, you haven’t heard?  It seems that as soon as he got back to North Carolina, he called up Bruce and asked him to call Jorge and tell him he wasn’t going to buy the house after all.”

“Bruce is supposed to do his dirty work?”

“Well, Bruce said, ‘No way.’  He told Jerry that he had wasted a lot of good people’s time, and that he owed them all an apology.  So there’s more to the story.  Paul told me that he got a phone call from Jerry, apologizing for wasting his time!  I hadn’t realized that Bruce was such a moral authority.”

After my visit, I headed home, detouring through the Duck’s Butt.  That’s the name of the bar and pool hall at the back of the hotel.  It is an homage to Mary’s first gig as a bartender at The Black Steer, a steak house in Loveland, Colorado, where we grew up.  The bar is at the back of the restaurant and is called The Rear of the Steer.  So now that Mary has a restaurant called the Pato Loco, she put in a bar called the Duck’s Butt.

This photo of Pato Loco Inn is courtesy of TripAdvisor

Antonello, the original Pato Loco, an Italian baseball star whose running style reminded people of a duck, and the builder and first owner of the place, was waiting his turn, while Bruce and Richie played a game.

“Hey, Bruce – I hear that you are a moral authority!”

“I hear that Jerry is calling up people all over Coco apologizing for wasting their time.”

“He made me so mad!  He puffs around here, says, ‘I could buy this half a million dollar lot; I might buy this quarter million dollar condo.  Push comes to shove, he can’t come up with $165,000 to buy a house.”

His irritation wasn’t interfering with his run with the balls, so Richie was sitting down for a while.  “I knew a guy like that.  There was somebody, stayed here at the hotel.  Every day for a week, he went to a different realtor, spent four-five hours with them.  They showed him all over Costa Rica.  He never bought a damn thing.”

“Well, I never thought much of Jerry, but if he really is apologizing, he has redeemed himself an inch in my estimation.”

Richie said, “If you don’t think much of somebody, then you aren’t disappointed.  They can only improve in your estimation.  But I once had to make so many apologies, I had cards printed.”

“What was that about?”

“Oh, it was a weekend that I did valium.”

“I really like valium.”  I didn’t have to explain, nobody caught it.

“Valium and alcohol.  And some other stuff.  The next week, when people started telling what I done, I started making apologies.  Then more people told me more stuff that I done.  Some of it they made up.  I just kept apologizing.”

But then Richie met my sister Mary, and Mary met Richie.  And it was a blessing for all who knew them. 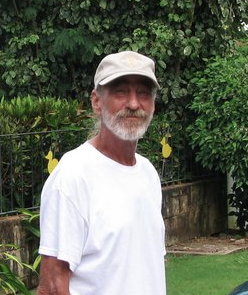