What is God Doing on World Bipolar Day?

It was not that this man sinned, nor his parents, but that the works of God might be made manifest in him. John 9:3, Revised Standard Version.

Or as The Message puts it: You're asking the wrong question. You're looking for someone to blame. There is no cause and effect here. Look instead for what God can do.

In the Gospel, Jesus heals a man born blind. Presumably what God can do is made manifest by that healing. So, okay, Jesus, what about me?

What about me? How many people, with how many disabilities, wonder what God is doing, especially those of us surrounded by others who wonder, Who sinned, this one or the parents?

Isn't that what is behind those well-intentioned advisors -- You just need to... decide to be happy... get over it... get out more... exercise... take this herbal remedy... have you tried...  In other words, it's your own damn fault.

My mother worried, and it took until nearly the end of her life before she could say it out loud, Is there anything I could have done differently? Was it my fault?

So, props to Jesus who says, You're asking the wrong question. Look instead for what God can do.

That's the question for World Bipolar Day, What is God doing with my Bipolar?

It's a gift. Okay, it's a pretty powerful gift. I'm doing a lot of work to learn how to use this gift instead of being blown apart by it. It made for a lot of work on my editor's part. But here it is, right here in the diagnostic criteria: flight of ideas. And I have already preached that sermon. So here it is again, from February 21, 2013: 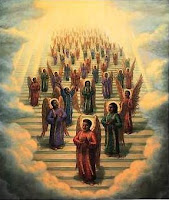 Pride of lions
Fleet of ships
Host of angels...

It's a lovely phrase. Isn't that what ideas do -- fly?

I think so. But evidently, not everybody.

A Visit from the Goon Squad 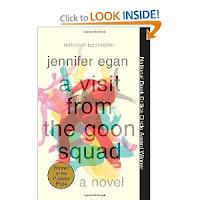 I was looking to meet new people in my new home town, and went to the library's book club. The selection for my second meeting was Jennifer Egan's A Visit from the Goon Squad. Sex, drugs, rock and roll, and, oh yes, suicide -- these characters were my tribe! No, I haven't lived their lives. More to the point, I have asked their questions.

I wasn't sure how Egan's characters would be received in this group of middle-aged and older women. I didn't know the book club members yet, but they seemed pretty respectable. Then again, I can seem pretty respectable, too. I expected a lively discussion.

Nope. No lively discussion. No discussion at all. They were so dismayed, they were speechless. The librarian resorted to reading reviews.

I thought I'd open things up by framing a potential talking point. I said, the theme is about the changes one makes across a lifetime. How did I get from Point A to Point B? I said that is a live question for me lately. I thought they could say something about that, us all being of the age when we look back and reflect on choices made, that sort of thing.

Nope. Silence. The librarian went on to the author's bio.

Granted, the characters in the Goon Squad went from Point A to Point Q or X. It was too much of a stretch.

One person, a psychiatrist did have something to say. (How did I end up in a book club with a psychiatrist? This could be interesting...)

The book reminded me of some of my patients, who have this symptom called flight of ideas.

Oh, what the hell. Clearly I wasn't coming back. I said, Maybe that's why I liked it so much.

Flight of Ideas Defined
The American Psychological Association's Dictionary of Psychology defines flight of ideas as a rapid, continuous succession of superficially related thoughts and ideas, manifest as hurried speech with frequent abrupt shifts in topic.
In other words, my essential writing style.

Merriam-Webster describes it as a rapid shifting of ideas with only superficial associative connections between them that is expressed as a disconnected rambling from subject to subject.

Dictionaries vary by whether they acknowledge that the ideas in flight are indeed connected. Some just call it disorganized and incoherent.

The thing is, disorganized and incoherent to whom? To the psychiatrist, of course.
I think Merriam-Webster just can't keep up.

Flight of ideas is a symptom of the manic phase of bipolar. That is what the DSM says.

What would people with bipolar say? Flight of ideas is our ability to find more associations, connect more dots than our psychiatrists can.

Actually, this is a chronic bipolar condition, or again, the way we would put it, the source of our art. They think it is part of mania simply because, when we are manic or hypomanic, we forget to rein it in. We speak as quickly as we think, instead of as slowly as the people around us think.

I had no trouble following the multiple story lines of A Visit from the Goon Squad, and recommend it to anyone who is willing to go along for the ride. I love how the author weaves its many strands into a coherent narrative around her one central theme, a theme to which any reflective reader could relate, even if it is presented by characters to whom the reader cannot relate. The reader just might grow in his/her capacity to find connection to and compassion for people of different life experience. I think that is one of the great gifts of a great story, that it leaves us bigger, more connected to the universe than we were before we read it.

I am reminded of a story John McManamy tells, of when he was asked to speak at some psychiatric association meeting. He said to a hall filled with psychiatrists 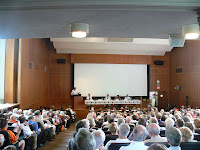 -- What you need to understand is, we don't want to be like you. I mean, to me, you all look like you have flat affect.

It depends on who is doing the diagnosing, don't you think?
~~~~~~~~~~~~~~~~~~
What is God Doing on World Bipolar Day? How about -- inviting slow thinkers and bipolar thinkers alike to notice and appreciate the infinite variety of creation, which includes both people whose ideas are safely earth-bound and people whose ideas can fly.
So now go look in the right hand column for the music video. Enjoy the bouncing balls -- whether you can follow them or not!