Bipolar — What’s That in Your Genes

Your genes — that’s where bipolar gets started. Of all the mental illnesses, bipolar is the most heritable. That means it has the strongest genetic connection. In studies of identical twins, if one twin has bipolar, so does the other in 75% of the pairs. That compares to 60% with depression and 35% with schizophrenia.


It took years, but eventually I learned, when my doc asked that question, that my answer was to shrug and say, Not that I know, but my mother was married five times.

He nodded and made his note. 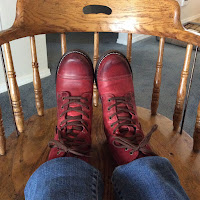 So that’s the deal. You don’t know. Read World Bipolar Day and the Color Red with your parents in mind and that cousin nobody talks about. If it fits, mention it. If your doc doesn’t probe the issue, but prescribes an antidepressant without a mood stabilizer, get a second opinion.

There are many ways that bipolar lurks in a family history, multiple divorces, recurrent depressions, a criminal background, flamboyant behavior, sexual exploits, overspending, even astounding accomplishments.

But understand, there is no smoking gun, no single genetic bullet either to dodge or bring you down. It’s a whole constellation of genes, little variations in the DNA that nudge in one direction or another. The more nudges, the greater the chance that signs show up, a bit of moodiness, an occasional surge of energy or productivity, a certain originality of thinking, an extra delight in physical sensations, poor sleep patterns, a sensitivity to disruptions of schedule, a tendency to take risks, difficulty recovering from stressful events. Combine enough nudges with early childhood trauma to trip the trigger, you get bipolar.

That's not all there is to it. Lots of people with two afflicted parents are just fine. People with no discernible family history get diagnosed with bipolar.

Or rather, some variation of bipolar. The DSM identifies Bipolar I, Bipolar I, Cyclothymia, and Bipolar NOS (not otherwise identified). But the DSM is referring to symptoms and their severity. The genetics people are exploring the different constellations of genetic variations that produce assorted collections symptoms.

The popular picture of up/down is laughably simplistic. So is the DSM’s symptom counting, five of nine from this column, three or maybe four from that. Someday we will have a different way to diagnose, and probably a different set of diagnoses. Better diagnosis opens a window for better treatment.

Meanwhile, here is the bottom line. Bipolar is treatable. It’s difficult to treat. But it’s treatable. When one medication poops out, chances are a new, more expensive one has been developed. And there is a host of non-pharmaceutical treatments to be tried. But the real breakthroughs are yet to come.