Ron Pies and I ask similar questions.  Well, I never asked Is Suicide Immoral?  But maybe I should let that one go...  In addition to being Professor of Psychiatry at SUNY and Tufts, Pies is a bioethicist and Editor in Chief Emeritus at Psychiatrictimes.com.  So while he writes books like Clinical Manual of Psychiatric Diagnosis and Treatment: A Biopsychosocial Approach, his philosopher, poet, and novelist vocations are expressed in other works, including The Myeloma Year: And Essays on Mind and Spirit.

The kind of guy I'd love to meet for coffee and conversation, Pies added to my fascination an article reflecting on his role as a doctor, Priests, Providers, and Protectors: The Three Faces of the Physician.  See, my senior thesis reflected on my own future role as priest, the ordained kind, Is the Holy Spirit an Equal Opportunity Employer?  Both of us take on the notion of priest as Father.

"Yes, Father, I've been taking my medicine."  A patient's slip of the tongue led Pies to recall the ancient connection between the roles of healer and holy person.  It's a natural connection, if you consider the divine will to be for healing.  It doesn't matter what faith tradition you examine.  The two roles were originally one.

Alas, early Christian writers introduced the Father metaphor into their reflections about priesthood.  Monasteries used the title for the Abbot.  Then over time, the role of parish priest followed the monastic model.  Quite ironically, I might add, since Father is the one title Jesus told his followers not to use.  But subsequent generations have never been able to relinquish the implied power over, even since the last century when the title became problematic in the face of women clergy and in the Episcopal Church, women priests.  The newly ordained guys this century seem to cling to Father all the more.

And with the title came paternalism, a system based on the concept of women and children as a man's property.

Pies rightly rejects the paternalism of the medical system.  "The priest-like status of doctors historically encouraged paternalism to which patients readily acquiesced... We are not priests, and we should not lay claim to the 'God-given' power or authority of priests -- which, as we well know, may be subject to abuse and exploitation." 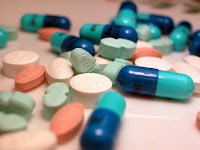 Indeed.  And yet...  Healing is not mediated solely through the application of a doctor's medical expertise.  The worst, most harmful thing a psychiatrist ever said to me was, "I don't do relationships.  I use pharmacology to treat psychological illness." 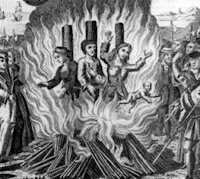 It's the paternalism, not the priesthood itself, that is the problem.  When the roles were originally one role, it was that of witch, witch-doctor, shaman, druid.  These words do not sit easy in our modern minds for good reason -- there was all out assault on these healers by Church and a modern scientific establishment that enforced its own paternalism.

Next week I will publish an excerpt of a book to be published next year, Prozac Monologues: Are You Sure It's Just Depression?  In the excerpt, a doctor who does do relationships used the spiritual power of her role.  She didn't call herself a witch-doctor.  But the priest sitting in her office and in need of that power recognized the spell.

Other posts in this series: