Doctors as Priests -- The Look

Several years ago I took Prozac for what was then thought to be Major Depression.  The hypomanic episode it precipitated gave me a book.  But before that, it gave me the runs.  Since my first doctor thought the runs would go away on their own, but I was about to leave for Costa Rica and wanted them to go away faster, I sought a second opinion.  The new patient form asked for my full history, and I told the truth about my depression, as well as the runs.

What follows is an excerpt from Prozac Monologues, the book to be published next year.  It describes that appointment.  I offer it as an example of a doctor functioning as priest.  [See last week's commentary on Ron Pies' article, Priests, Providers, and Protectors: The Three Faces of the Physician.]  Not the Father kind of priest, but the more ancient healer/witch/shaman kind.  It's tricky to handle the power of the priesthood.  But I want doctors to manage that power responsibly, not give it up on account of its ambiguity.  It is the power of relationship.  We need doctors to use every power at their disposal to heal.  Priesthood is one of those powers.

...When the doctor looked at the piece of paper with all those words circled on it, she didn't smile at my weak attempt at humor.  Oh well.  What she was most concerned about for my trip to Costa Rica was how I would manage my depression as the Prozac was leaving my system -- which I could tell it was, because the dark suffocating cloud was coming back.

And now we had arrived at the heart of the matter.  I knew this part.  I could have conducted it myself.  I have conducted it myself, when sitting across from some other poor soul in my own office.  Did I have a "plan"?  Well yes, I had a "plan" but I didn't "plan" to use my "plan."  She didn't think that was funny either.  In which case, there was no way I was going to describe my bizarre thought about sticking a nail file in somebody's neck.

I told her I felt more in control of my bizarre thoughts, less afraid of them, since I was learning to laugh at them, which was true.  Actually, I had already started working on a comedy routine called "Bizarre" in my head.  But I didn't tell her that, because there was no humor in sight.  And she was working up to it.  I could tell.  Her face was rearranging itself into The Look.

She said, Can you promise me that you will not hurt yourself?

Those are the words, spoken in a soft, low tone, that go with The Look.  The Look is given with the chin down, looking up at you, but straight in your eyes, this puppy dog kind of expression, as if to say, It would hurt my feelings so very badly if you broke your promise to me."  Some people are better at it than others.  But she was fabulous.  It was a sight to behold.

Now I know the lines.  I have said them on occasion to some other poor soul, trying to cover the time between his/her appointment with me and the next appointment with somebody who could offer more expert help.  But I don't know how good I am myself at The Look.  I have never practiced in front of the mirror.  Good enough, I guess.  Because I have never lost anybody.

Wow.  What a concept.  I have never lost anybody.  It really isn't funny, is it, that responsibility.

Because I myself have given, as well as received The Look, I noticed the technique.  That is how I knew she was reaching deep beyond the technician of the best practices procedure, even beyond the healer, right into the heart of the witch doctor.  She was casting a spell.  And even though I noticed the technique, I deeply wanted this spell to work.  This spell was truly in my best interest.  It could save my life.  So I looked into her eyes, took a deep breath, and let myself fall under the spell.  Yes, I promise.  I will not hurt myself.

Of course, behind the puppy dog in The Look is The Steel Trap, with its unspoken words, You will not leave this office unescorted, unless you can make this promise.  And that is the safety net, in case you need to fall.

There is no insurance code for The Look.  It is possible for the doctor to ask the questions and check them on a form and fill out the paperwork and never enter that sacred space that is crossed by means of The Look.

No, it's the spell.  The spell is cast by the willingness of the doctor to cross into that dark and sacred space.  The person on whom the spell is cast discovers that there is another human being on this planet who is willing to look deep into the pain, to acknowledge the danger there, to refuse to hide from it with intellectualism or humor or anything else, and hand over a piece of his/her will to live. 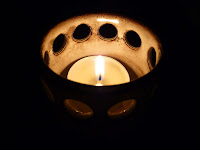 If somebody gives you The Look, look back.  Look deep.  Allow that transfer of will to take place.

Other posts in this series: