Can we reconcile a most basic suicide prevention strategy, means restriction with the 2nd Amendment? Gun owners and public health people have to find a way to talk about this. In Oregon, the conversation has begun.

Gun owners in rural have a sense of responsibility and honor. It's a thing. Part of that responsibility is to protect one's family, one's livestock, and oneself. So let us begin by acknowledging that some gun owners, the ones who live in rural areas where suicide rates are growing the fastest, need guns for protection. But they have to do the protecting themselves. The government, on account of distance and distrust, cannot do the job. And then let us acknowledge that one of the things they need to protect their families (and maybe themselves) from is suicide. 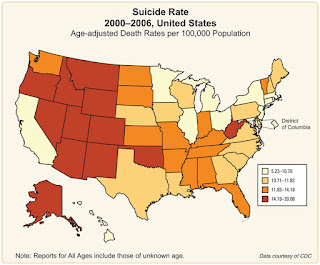 Get it? Rural areas have more suicides largely because they have more guns.

Why would this be?

These numbers are from people who showed up in an emergency room in 2001. They represent how many people died who used the particular means to achieve that end. They underestimate lethality, because they do not include people who don't get to the emergency room, because they are already dead. If you count all the dead, all the numbers go up.

And if you live in a rural area, miles from an ER, that longer response time adds to lethality.

If you use a gun, your chances of survival and eventual recovery, like, wanting to live again, are about 10%. Of course, you may be severely and permanently injured. But that is beyond the scope of this post.

If you take pills, your chances of survival rise.

I wrote this post six years ago and have edited it severely. The original is here. It discusses a variety of myths about suicide, that people who survive did not truly want to die, that if one method is not available another will be chosen, that suicide can't be prevented at all. False. False. And false.
Another Thing - Impulsivity

Means reduction works not only by reducing lethality of attempts, but also by addressing impulsivity.  People don't spend as much time planning a suicide as you might think, especially young people, people who experience a significant loss of relationship, and people who abuse alcohol.

71% thought about it for an hour or less.

Only 13% planned it for more than a day.

Substance abuse and depression are frequent underlying risk factors for suicide. But the impulse itself can be extremely short-lived. Time is the suicide preventer's best friend. If the person has to go get the means, the impulse may pass, the person may sober up, the friend may call, something, anything might happen to relieve the distress and prevent the action.

That is why a gun already in the home, right there where you can get hold of it in less than five minutes, increases the risk of suicide, especially by young people.

But What About the Second Amendment?

The NRA has opposed all kinds of measures that would increase gun safety, biometric locks and the like, red flag laws, measures that would keep guns out of the hands people with demonstrated history of violence, waiting periods to allow for genuine background checks. But the NRA does not speak for all gun owners, many of whom are indeed concerned about safety,

The National Shooting Sports Foundation has produced materials for gun shops and ranges. They want gun owners to be safe. That's all.

Public health officials know they need to listen to the public to be able to craft their message. In some areas, they are finally listening to gun owners. Legislators need to let gun owners help craft legislation, not to serve the NRA's radical agenda, but to serve gun owners' shared concern to protect their families from suicide and law breakers. It's not about taking guns away from law-abiding citizens who use them responsibly.

As I suggested in last week's post, the typical strategies to prevent suicide, even those addressed to gun owners, are not going to fix the issue as long as we live in despair.

But breaking down the barriers to communication is a start.


map of suicide rates from the National Institute on Mental Health, in the public domain
photo from Emergency Room by Thierry Geoffroy, used under Creative Commons license
photo of bedroom dresser by author
at September 26, 2019