Antipsychotics and Loss of Brain Matter

What are antipsychotics doing in your brain besides preventing psychosis? This is a report on a study conducted from 1991 to 2009 that looked at that question.

Here is the context:

Progressive brain volume changes in schizophrenia are thought to be due principally to the disease. However, recent animal studies indicate that antipsychotics... may also contribute to brain tissue volume decrement. Because antipsychotics are prescribed for long periods for schizophrenia patients and have increasingly widespread use in other psychiatric disorders, it is imperative to determine their long-term effects on the human brain.

Before I get to what the study revealed, here is the investigator, National Medalist of Science winner, Nancy Andreasen.


Note: The interview was recorded twenty-five+ years after the study began and reflects a development in the questions pursued.

Objective of the study:

Questions raised by the investigators:
Given that patients begin with brain volume deficits and that the disease progression will add to them, the assumption is that they can't be good. [The present author notices that the changes occur in the frontal lobes. Schizophrenia causes problems with cognition, which would seem to be connected to those changes.]
This is a current area of research, but has not been demonstrated yet. The fact that antipsychotics produce changes in the brain similar to the changes produced by the disease itself suggests interesting areas of investigation regarding the disease process itself.
These medications have immensely improved the quality of lives of people with schizophrenia. They are effective for what they are intended to do. Anti+psychotic. They address the positive symptoms of schizophrenia, the psychosis. They do not seem to address the underlying disease mechanism and may contribute to the progressive problem.

Antipsychotics are effective medications for reducing some of the target clinical symptoms of schizophrenia: psychotic symptoms. In medicine we are aware of many instances in which improving target symptoms worsens other symptoms. Hormone therapy relieves menopausal symptoms but increases stroke risk... It is possible that, although antipsychotics relieve psychosis and its attendant suffering, these drugs may not arrest the pathophysiologic processes underlying schizophrenia and may even aggravate progressive brain tissue volume reductions.

Should you take antipsychotics?

No way in hell am I going to answer that question.

I do have some thoughts. First: 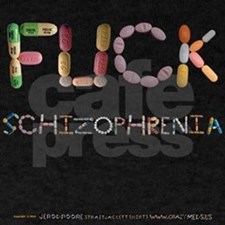 You can get that t-shirt from CafePress. thanks to Jerod Poore for creating it.

Schizophrenia is a terrible disease. While there is a range of severity, most people are not able to function without these medications. A little more brain loss (the disease itself will cost you) or a life in the hospital/jail/the streets. What a horrible choice to have to make.

That said, there are people who live happy, fulfilling, productive lives, independent and well-employed despite the challenges of this condition. I know some of them personally. They don't get a lot of press. But come back next week for their stories. There is hope. There is promise.

Oh yes, and they take their meds.

Andreasen recommends using the lowest effective dose, since the amount of loss is dose and duration dependent. That makes immanent sense to me. The dose prescribed in the hospital sometimes is not adjusted once the crisis has passed. Dosage level is an issue worth pursuing with your doctor.

Andreasen also raises concerns about the increasing use of antipsychotics for off-label purposes, including children who may be at risk for schizophrenia, the elderly for tranquilizing purposes, and people with bipolar and depression, issues of cost/benefit analysis beyond the scope of the study and beyond the scope of this post.

This is how basic science works. This is one study. It built on similar studies and adds to their confirmation. It is one piece of the puzzle that will contribute to an understanding of how the brain works. While it was not designed to invent a treatment, it does have preliminary implications for treatment protocols.

I will continue to post about schizophrenia, the people who live with it, and I hope, more on the people involved with this study. Keep your stick on the ice. We're all in this together.
at December 05, 2019