A Common Struggle - A Review

In A Common Struggle, Patrick Kennedy tells the story that only he can tell.

There are many memoirs of depression, bipolar, co-morbid substance abuse, families that keep secrets, and recovery. Lately there are memoirs that combine a personal story with a cause: get help, get the right diagnosis, find people who can support you, advocate for better treatment.

His aunt Eunice lobbied for better care for people with mental disabilities and started the Special Olympics. That issue was combined with mental health care in the Community Mental Health Centers Act signed by his uncle John in 1963. His father Edward spend his whole career advancing the cause of universal health care.

Patrick's contribution to his family's record of public service is The Mental Health Parity and Addiction Equity Act.

For political neophytes Kennedy's book is a master class in how bills actually come to be passed. A good idea is not enough. There were years of bringing stakeholders together, bipartisan negotiations, public forums to build pressure, and ironically, head to head confrontation with Edward Kennedy who was working on a similar but less extensive bill in the Senate.

The House bill (Patrick's) would cover all mental illness and addiction. The Senate bill (Edward's) was limited to "serious mental illness" and not addiction. Edward, the life-long Senator who got things done, was convinced that the more expansive House bill would be defeated and the opportunity lost to do the more limited good. The relative newcomer Patrick persisted with the addiction issue. And won.

The irony and back story that Patrick tells side by side with the political story is how personal this issue is to the Kennedy family. Patrick's mother suffered from addiction. His father - he never quite says that Teddy Kennedy was an alcoholic, but his drinking was legendary, matched the effects of the traumas of his life. Patrick himself was desperately ill with bipolar, and his addictions out of control for this entire struggle. It's a wonder his drug use didn't kill him. He did survive because of the health care he was able to afford, in and out of the finest inpatient treatment facilities. It is typical of the Kennedys that he did not take his good fortune and leave it at that. Getting treatment for mental illness, addiction, and physical illness are common struggles. Kennedy threw his lot in with the rest of us, outing himself in the press, and using every advantage that his name has given him on our behalf.

Passing the law turns out just to have been the beginning. It took years before the regulations about how the law was to be interpreted were even written. And today, enforcement is a joke. Insurance companies' failure to reimburse reasonably for mental health care means that people cannot find in network providers, if they can find providers at all.

My personal story on the access issue: I lived in a university town with eighty-eight psychiatrists. Only three accepted my insurance. And these three, well, let's say these three had issues. I went without psychiatric care for a few years until I was able to change insurance companies to one that covered the other eighty-five.

Then I moved. My new therapist and primary physician gave me lists of providers. I called and called and called. "But I have insurance! I have good insurance!" Or so I thought. The only way anybody would see me is if I entered the system through the ER. I ended up driving 100 miles to see a psychiatrist. Good thing I have a wife because I wasn't in shape to drive. Good thing I wasn't desperately ill because the Cascade mountains lie between me and that psychiatrist, and it was a trip we could only take in good weather. 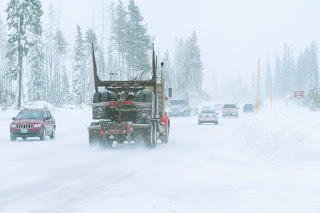 Patrick Kennedy left his career in Congress in January 2011. He continues to work on the cause, addressing the access issue among others.

We all need to work together. It is our common struggle.

book cover from Amazon.com
photo of Santiam Pass by the Oregon Department of Transportation, used under the Creative Commons license
at February 14, 2020