Neuroscientifically Challenged - Check it out

Yay! When I found a new (to me) website, Neuroscientifically Challenged, I rewrote the resource section of the book. Given that Prozac Monologues is in proofreading stage, my project manager was not as pleased as I was. But it's now a better book. 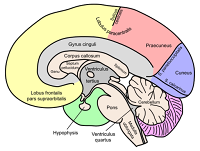 Mark Dingman started blogging in 2008 as a way to explore his interest in neuroscience. That interest morphed into a PhD program, then a new career, and now his continued work on a website where he can learn, draw, teach, and talk about his favorite topic, the brain. Take my eclectic blog, focus on the brain part, turn it into a genuine resource, call it Neuroscientifically Challenged.

The website features two-minute videos each with a bite of information. Okay, Dingman has to talk kind of fast to get it done in two-minutes, but really, what do you want? Here is a sample:


As my own reading continues, his glossary will get a workout, from apoptosis to zona incerta. Actually, I haven't come across either of these terms in my reading yet. But they did attract my attention in the glossary. You gotta love a brain part called Zona Incerta, literally, the-area-that-we-have-no-idea-what-it-does-though-you'd-think-it-is-important-because-it's-so-well-connected. It's the cone shaped thing in the middle of the image below in the center of the thalamus. Doesn't it look like it's been pinned down? I wonder why. Incerta.

Then there are the articles about curiosities like The Mysterious Dancing Mania and Mass Psychogenic Illness. 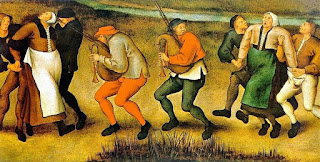 Oh, we are just beginning...

Dingman also has a book, Your Brain Explained, which is on my list to review. So, check it out. Have fun.

graphic of brain, medial view used under the GNU Free Documentation License
graphic of zona incerta by Bjorn Merker, used under the Creative Commons license
painting of Dancing Mania by Pieter Brueghel the Younger, in the public domain
book cover from neuroscientificallychallenged.com