Frazzled Cafe and Ruby Wax - Yes, I am a Fan 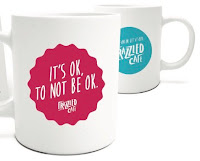 Ruby Wax is the founder of Frazzled Cafe, a peer support group for anyone who is overwhelmed by the stresses of modern life. As Ruby says, our brains just don't have the bandwidth. If that describes you, check it out. But bring your own coffee. The meetings moved online, a Zoom meeting on account of... you know.

Ruby is an American-born long time television personality in Britain and comedienne whose career pivoted when mental illness caught up with her. She went back to school to study the brain and got a masters from Oxford on mindfulness based therapy. Since then she has written books, toured, lectured, using her prodigious brain and her comic chops to entertain and educate about brain health.

So I'm not the only one whose career pivoted to brain nerd in response to the question, What the hell happened here? and then makes that information available to the general public using humor and plain English. Ruby's was one of my most coveted and not-secured blurbs for Prozac Monologues: A Voice from the Edge. I could spend a lot of time ruminating about that. But in the video below, she teaches me how not to.

The following was first published in April 2014. If you want more, here is another post with another video. Can you tell I'm a fan?

How to Tame Your Mind -- Ruby Wax

Ruby Wax nails depression: when your personality leaves town, and suddenly you are filled with cement.

She nails the problem: our brains don't have the bandwidth for the 21st century. Nobody's brain does. Yours doesn't, either.

And she nails the solution: learning how to apply the brakes.


photo of coffee cups from frazzledcafe.org/
photo of Ruby Wax used under the creative commons license
at April 15, 2020