What do you think are the most common misconceptions about antidepressants?

Prozac Monologues: A Voice from the Edge is at the press kit stage with Q&A in development. My publicist wants me to answer questions that interviewers might ask. My responses should be in the three to seven sentence range, she says.

Three to seven sentences are not my forte. I am doing my best and taking comfort that in an interview format, there might be a follow-up when I can say more.

They are good questions and worth a blog series, I think, where I can expand to three to seven paragraphs. Mostly seven. Maybe more. Plus, you know, pictures. So that's what you get for a few weeks.

No, antidepressants are not happy pills

Nor do they change your personality. It's depression that does that. Having depression is like getting cast in concrete. You don't notice it at first, but slowly it sets, locking your thoughts, your emotions, your movement in place.

Okay, so it looks like there's a lot of movement in a hamster wheel. It may feel like your brain doesn't stop. But it doesn't really get anywhere, does it.

People for whom antidepressants work (that's not everybody who takes them, but that's another post...) say, I feel like myself again. Your self may not be happy. In fact, your self might be a jerk. But antidepressants get you off that hamster wheel so you can feel your feelings, the whole range of feelings. My therapist used to call it all eighty-eight keys, referring to the full keyboard of a piano. On antidepressants you can think clearly again, get out of that negativity loop that keeps confirming your hopeless/helplessness. On antidepressants you can make choices again -- you know, therapy might help with that jerk-thing. 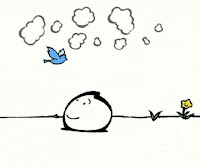 Oh, I know that's what you were told. Zoloft sold a lot of ADs with its cute little cartoon that took an overly-simple idea and turned it into a heartwarming sales pitch.

The chemical imbalance thing was an early hypothesis, trying to figure out how antidepressants work. One problem with the hypothesis is that they take so long to work, four to six weeks usually. If you just need more serotonin in your synapses, (check out Zoloft's video) then why don't you feel better in a couple days, as soon as the "balance" is restored?

Nowadays scientists think the synapses are not where the action is anyway. But it is fixed in the public imagination as the fault-free explanation for depression and why you shouldn't be ashamed for having to take medicine.

Dr. Ronald Pies has written several articles about this controversial phrase, the problems with it, and a better, albeit longer, discussion of the causes of depression. Try Doctor, Is My Mood Disorder Due to a Chemical Imbalance? if you'd like to know more.

Well, that issue is complicated. Zoltán Rihmer and Hagop Akiskal wrote this cleverly titled article on the subject that gave fits to the design people for my book. (The computer program kept thinking that t(h)reat(en) was more than one word.) But I digress...

The bottom line is, if you truly have unipolar depression, then antidepressants are the thing for you. They save lives of severely depressed people.

On the other hand, if you have a bit of unrecognized bipolarity, and it doesn't have to be the screaming wild recognizable mania of the movies, then antidepressants can create what are called "mixed states," the misery of depression combined with the agitation, insomnia, irritability, increased suicidal ideation and maybe a dash of impulsivity of mania or hypomania. You want to die and you have the energy to do something about it. That's a dangerous, sometimes deadly combination. Most people who attempt suicide do so while experiencing mixed states.

Those terrible side effects that give you pause usually happen to those of us with unrecognized bipolarity. If doctors did a better job of diagnosis, then we wouldn't get what are for us the death pills, the effectiveness rate of antidepressants (which now hovers just a tick above the effectiveness rate of placebo) would rise, and antidepressants would get cleared of the charges against them.

That's my story and I'm sticking to it.

What to do about antidepressants

Before you pop those pills for whatever diagnosis, check out these screening tools: the Mood Disorder Questionnaire and the Bipolar Spectrum Diagnostic Scale. If you are taking antidepressants and it's not going well, check out those screening tools. If they give you an all clear, then happy day! Or, happy day to come... If they raise further questions...

I'm over my seven paragraph limit. Further questions will be next week's post.


photo by author
gif from giphy.com
cartoon from depirrogarrone.com
flair from Facebook.com
at April 30, 2020