Between Stimulus and Response

Here is what I found: 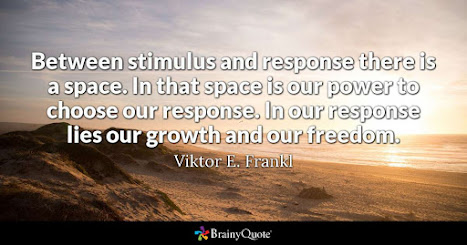 Okay, I confess, when you put an inspirational quote on top of a beautiful peaceful scene, it loses its inspirational value for me. That's just the way my brain works.

So I'd make my own image if I were inclined to that sort of thing, like if I were having a hypomanic episode. It would be three boxes, left to right.

On the left would be a screenshot of a webpage saying something like, Cannot open page because search timed out. Maybe, Cannot find printer. I saw those images on my laptop a lot last week.

In the middle would be one of those breathing gifs.

On the right would be... a question mark. Because the response is unknown. That is the area of freedom. So we don't know the response until it is chosen. Get it?

Between stimulus and response there is a space. In that space is our power to choose our response. In our response lies our growth and our freedom.

So there is a story behind my interest in the space between stimulus and response. It goes back to that first image, the screen that said my laptop could not find, of all things, my website. (My wife's laptop couldn't either. This was not a laptop issue.) Its address is plastered all over all my social media accounts and emails, because I am a new author with a book to promote. But that morning, my professional website seemed no longer to exist.  In fact, when I tried to sign in to the platform, the platform denied my existence. Like, as though I didn't even have an account.

That was stimulus, alright. And these days, the stimulus made me even more wobbly than I already am. How about you? Are you a bit wobbly, too, these days?

David Conroy says, Suicide is not a choice. It happens when pain exceeds resources for coping with pain.

If you don't get the connection between losing a website, losing the existence of a website and suicide, well, good. You've never been that close to the edge. And I'm glad for you.

But believe me, it could have been the last straw, the very last straw. In another year, it might well have been. But lately I have a little less pain and a bit more resources. That critical balance is in my favor.

I paused. I put some space between stimulus and response. I breathed. I slept on it, thinking maybe this catastrophe would just go away in the night. Actually, I didn't sleep much, but you get the idea.

In the morning, the missing website was still missing. But now I remembered one of my resources. My son just happens to be a lead software programmer for a major cyber-security company. He fixed my website once when an update rendered it uneditable. So I texted him.

He got me in touch with the host. (What do I know about platforms and hosts? One refers to shoes the other to communion wafers?) Well, they couldn't find a problem. Neither could my son. And over the course of an afternoon spent chatting with one and texting with the other, somehow the platform straightened itself out and my website made a fully functional return to my laptop.

What was the problem? Who knows. The programmer threw around phrases like hug of death and the rdap database event that he saw on the host's log. He said,

I've learned not to try to understand everything.

Has anybody created an inspirational poster with those words on a beautiful peaceful background?

He also said The internet is held together with toothpicks and elmers glue. Oh wait, I do have an image for that one:So anyway, I spent the day practicing the pause (more or less). I am sure that the cortisol did wipe out a few brain cells, but not as many as it might have, and not so many as to push me over the edge. I call it a win.
And I commend the process to you today and in the days to come. Between the stimulus and the response there really is a space. And that space is your power to choose. Hang onto that space until you are able to choose wisely.
at November 09, 2020