Thanksgiving is one of my hypomanic seasons. I'm getting better at not taking on projects that worry my wife. In fact, I have given up gingerbread houses altogether. Which is not to discourage you, just to acknowledge that they were once my one great weakness. That woman in the fringed dress down there? - Each bit of fringe was an individually placed sprinkle, separated out from a container of red, green, and white sprinkles. See what I mean?

But I did learn some things from my hypomanic gingerbread houses. And learning is good for the brain. The following post is a repeat from ten years ago, when I was in the throes of it. It explored the relationship between gingerbread and cognitive behavioral therapy. I am one of many who have a love/hate relationship with CBT, which I freely acknowledged to my CBT therapist in our first session. Nevertheless, she persisted, and I persisted, and I do rely on it daily and have written about it from a variety of angles. So here it is again, for those of you who want to explore CBT and also for those of you who want to know how to make a nine patch quilt out of fruit rollups:

My therapist said Think of something you might find enjoyable.  You don't have to do it.  You don't even have to enjoy it.  The goal is not to move your mood from 1 to 10.  Any mood change is a bonus.  The goal is simply to give you something else to think about [-- besides what I had been thinking about.]

Distraction is one of those really irritating CBT techniques.  I am traumatized and can't stop thinking about this.  Okay, so think about something else.  I pay money for this?

But my other therapist, totally different method, said pretty much the same thing.  And I was six weeks from a major project I had promised for the holiday season.  And I am not sure it would have worked except that the wheel was ready to turn from early autumn danger to late autumn hypomania.  But he did and it was.  So...

She said think about it.

I guess I overshot the mark. 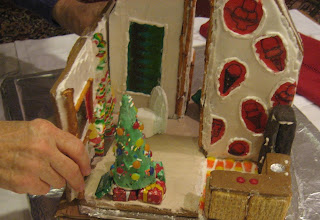 I used to churn out 10-12 gingerbread houses each season, back in my undiagnosed days.  I used the Joy of Cooking recipe and floor plan.  But each and every one was one of a kind: a log cabin made of pretzel sticks and peanuts for the chimney, another with candy canes on the roof for a chalet effect... No, I wasn't manic.  I was excited...

It could be said I don't know when to quit.  So a simple suggestion, think about something you might enjoy instead of what you are thinking about right now, became a fourteen inch high, furnished gingerbread house.

See what I mean?  Once I decided to tile the kitchen floor with candy corn, I was gone.  Note the faucets for the aluminum kitchen sink.  And the handles on the refrigerator.  There is a fireplace hearth down there, made of a Milano cookie.  Even as I was installing these things, I knew I was out of control.  But I could not stop. 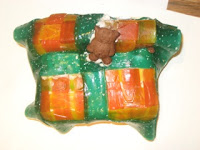 Here is a nine patch quilt, made from fruit rollups.  Plus a teddy bear on the pillows.  Should you decide to start quilting with fruit rollups, here are my methods.  Unroll them a few days in advance to dry a bit.  Don't overreach.  Let the materials tell you what they are willing to do.  Use liberal amounts of vegetable oil on your fingers and cutting utensils.  Keep the knife clean.  I recommend an exacto knife, under supervision if you have a problem with sharp objects.  Place your product between oiled sheets of cling wrap, then between sheets of paper.  Iron at LOW heat for five seconds.  Breathe.

I refer to this as my diagnosable gingerbread house.

By doubling the dimensions, I had introduced engineering issues.  I needed weight bearing walls.The closet was designed for that purpose.  I made a double wall facing the living room.  But I failed to double the wall with the door.  Two by twelve inches, it was the first piece to break.  The pretzel sticks inside the closet hold it together. 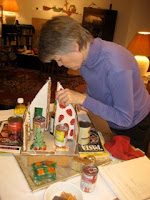 If I were to get philosophical -- and while I bent over this project, holding my breath and waiting for icing to turn to cement, I had plenty of time -- I would reflect that sometimes things or people are created that do not have the structural integrity to withstand the pressures to which they will be submitted.  Nevertheless, they can get by with a little help from their friends, even friends that brittle themselves, like pretzel sticks.  This is the essence of support groups.  Get into one. 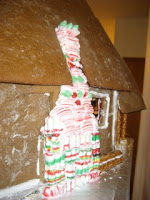 Some of us are not particularly unstable, but we collapse under pressures beyond normal experience.  If we don't have to bear the weight by ourselves, we can make still our own creative contribution to the whole.  The fireplace wall fell into three places.  Twice.  It stood, once it received a full back brace.  The brace is not flashy.  It is not even visible, covered by the outside of the fireplace.  But it is essential.

Anyway, diagnosable.  The roof also collapsed, the weight bearing walls notwithstanding, because I pushed too hard while attaching it.  Be gentle with yourself, my friends.  The stronger parts can injure the weaker.  Self-restraint is especially important where you are strong. 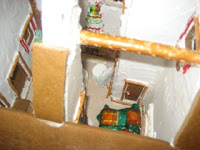 But we can learn from our mistakes, and turn them into more creative opportunities.  The roof went for snacks to a bible study group.  I replaced it with a lighter version.  And then I broke one side again.  This time I finally listened to my spouse, and put up just half a roof, so people could look in on that nine patch quilt.  None of us has all the answers.  And sometimes irritating advice is good advice.

Even if it is irritating. 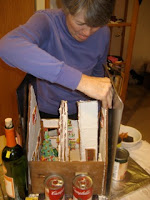 Even in the midst of this craziness, I kept aiming at sanity.  My mantra was Prototype, prototype.  The point of a prototype is to make as many mistakes as possible, in order to learn, and not make the same mistakes while doing the real thing.

I was making a lot of mistakes.  Boy, was I learning.

Dialectical thinking means that life is not divided into black and white.  One can hold a painful thought and a positive one in the same brain at the same time.  That and valium got me through. 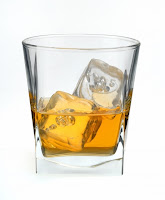 I learned not to use a double barrel aged single malt scotch as a brace to hold up a wall while assembling, like the soup cans above.  The bottle was missing only as much as is pictured here before I made that particular mistake.  Sigh.

After mopping up the nearly full bottle of scotch and as much shattered glass as I could find, it was time, it was time to stop working on the prototype.  Well, after I built the fire in the fireplace.

Two hot tamales, cut on the bias, a couple little pretzel sticks and a sprinkling of ribbon candy crumbs.  The back of the fireplace is the inside of a mint Milano with the white frosting scraped off. 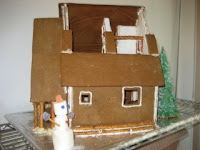 all photos of gingerbread houses by Helen Keefe
photo of scotch by Suat Eman
at November 26, 2020