The day approaches - the start of Lent Madness.

Take March Madness. Mash this bracket-style competition with a list of saints, some well-known, some utterly obscure, chosen by Scott Gunn and Tim Schenk, the two members of the Supreme Executive Committee who answer to nobody. Despite years of campaigning, they still will not include Fred Rogers. But I digress...

Every weekday through Lent the reader is presented with two saints and asked to vote. Anybody with an internet connection can vote - only once - they will know. The saint with the greater number of votes advances to the next round. 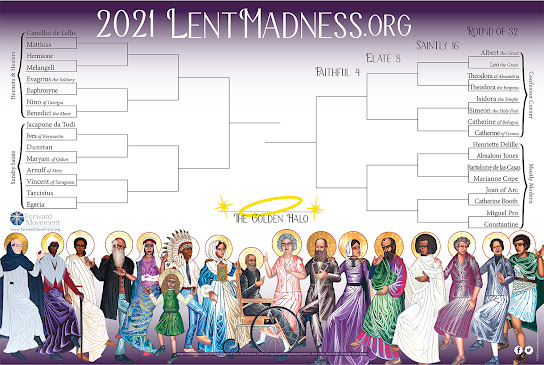 Information is provided by celebrity bloggers give you a basis for your vote, introductory bios in the first round of thirty-two, odd or intriguing stories in the saintly sixteen, kitsch souvenirs in the elate eight, campaign speeches in the faithful four, and summations in the final for the Golden Halo. You can use any criteria you like to make your choice. You can enter your reasons and campaign for your favorites in the comment section if you choose.

The competition begins this year on Thursday, February 18 and runs through March 31, when the winner of the Golden Halo is crowned.

It's all good fun, or is supposed to be. If you are the sort who explodes in non-Lent-like rage when Frances Perkins, Secretary of Labor under FDR, bests Luke the Evangelist in the final (2013), then this is not the Lenten discipline for you. Otherwise, it is an opportunity to learn some church history and to ponder the notion of holiness.

Speaking of which, can people with mental illness become saints? Well, obviously, Church calendars of saints are filled with visionaries (Bernadette), people with stigmata (Francis of Assisi), and extremists of many sorts (Joan of Arc). Some of them would be diagnosable in a modern age.

Except for the really big names whose oddness gets obscured by good PR - here's looking at you, Francis and Joan - the diagnosable saints tend not to fare well in Lent Madness. The comments in these competitions are telling. It's a self-selected electorate. They often express a disdain for legend, which disqualifies most of the pre-Enlightenment competitors. They tend to prefer the do-gooders. As a consequence, people who are diagnosable rarely make it past the first round.

I have written about two of these, Margaret of Cortona and my favorite, Christina the Astonishing, patron saint of therapists. Did Margaret have an eating disorder? Was she a cutter? I don't know, but people who rejected her didn't like her extreme fasting and self-disfigurement. Did Christina suffer from delusions? Her family went to the extreme of breaking her leg to keep her at home.

Does mental illness disqualify one from sainthood? 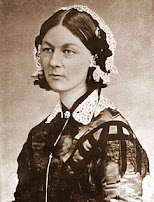 Let's talk about Florence Nightingale and the 1991 General Convention of the Episcopal Church. It was a hot one, not just for being held in Phoenix in July. People were testy as the Church began to talk about sex. So that was the atmosphere in which we considered adding six people to the calendar.

The commission that nominates additions to Lesser Feasts and Fasts had been charged to come up with some names other than the same old, same old, nineteenth century clergy. Specifically, they had been asked to include women and lay people. They presented a slate of six, four women, including Bridget of Ireland and Florence Nightingale, and two men, the founders of Gaulledet University. The House of Bishops stripped the four women off the list and recommended to the House of Deputies the two nineteenth century clergy.

Their reasoning? I can't remember the other two women. Bridget, they didn't like because she was legendary. Was she really a Christian or a Christianized version of the ancient religion? Of Florence, one bishop is reported to have said, Didn't she go a little loony in her old age?

The House of Deputies was not happy. Imagine Mitch McConnell and Nancy Pelosi voting the same way on anything. The equivalent happened in the unanimous vote to restore Bridget to the list and return the measure to the other House, where it finally did pass.

What was with Florence? There were mutterings and suspicions about the real reasons for her rejection. But after further investigation of her old age illness, (and assurances were made that she was not a little loony?), she made a comeback in another year and made it onto the Episcopal Church's list of Holy Women, Holy Men.

And then in clear vindication of her character, Florence Nightingale went on to win the arguably more prestigious Golden Halo in Lent Madness 2017.

This year's bracket is fairly obscure. Until we get into the bios, I don't know if it offers any fellow loonies as candidates. I wait for the Church and for church members to recognize mental illness as a life condition in which some of us strive to follow Jesus as best we can, sometimes heroically, sometimes in ways worth emulating, sometimes as examples of faithfulness to our Lord Jesus Christ. Calling some of us saints does not mean, God forbid, that anyone wants to be like us, even in holiness of life.

I wait. But I don't hold my breath.

Lent Madness widget from lentmadness.org
Perkins icon from http://francesperkinscenter.org/
needlework of Christina the Astonishing created by Cookie Scottorn, used with permission
more of Scottern's art can be viewed at www.cookiescottorn.co.uk/
at February 15, 2021