Hypomania -- A Day In The Life Of Bipolar II

Everybody knows about bipolar I.  Or they think they do -- the crazy shopping sprees, the missions to save the world.  So when I tell them I have bipolar II, I always hurry to explain, not that kind of bipolar.

So what is bipolar II, they ask. 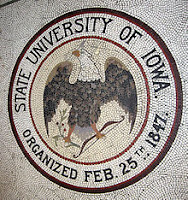 Bipolar II Goes To A Party

President Sally Mason of the University of Iowa invited my wife, a University employee, to her house for a reception.  Spouses were invited, too.  Helen likes to show me off, because I am good at parties, can talk with anybody, good social skills.  And I am cute.

So I checked my mood chart.  It was time, past time for the suicidal stage to check out and the better part of the cycle to makes its return.  The better part usually means mild depression, with a few flights into actually feeling good.  The signs were favorable.

I got cuted up and skipped the afternoon dose of valium, anticipating there would be wine.  All my meds make me dizzy, and I wanted to remain on my feet.  Like I said, good social skills.

First the preliminary chitchat.  There are more books upstairs.  These are the ones they unpacked first.  Translation: they already owned these before they moved to Iowa, their own choices, their own tastes.  Not for show.

But some were written by Iowa Writer's Workshop authors.  We were standing next to books that lots of people have read.  That should have been a conversational advantage, because I have read them, too.

The University of Iowa is insanely and rightly proud of the Iowa Writer's Workshop.  Over the course of seventy years, it has produced seventeen Pulitzer Prize winners, including Robert Penn Warren, Jane Smiley and Marilynne Robinson.  Its faculty have included ZZ Packer, Kurt Vonnegut and Robert Lowell.

Helen commented we could tell their books had been read.  You know, the bent spines.  The President smiled and agreed.

That is when the evil twin version of my hypomania made her appearance.

Pointing to one of those Pulitzer Prize winning books, Gilead by Marilynne Robinson, the evil twin said, and I quote, Boring.  Boring, boring, boring.  Good hostess that she is, Mason responded softly, It's a difficult book to read.  Robinson, besides being a graduate of the program, has also been a recent faculty member.  She probably visited the President's residence and inscribed it.

I could have redeemed myself by saying that it was difficult for me, too, because I know so many depressed clergy in small towns across Iowa (the first person narrator of the book), have been one myself, and also have worked with the demoralized congregations these depressed clergy leave behind.  The clergy in our diocese all read Gilead, and discussed the difficult issues it raises at one of our continuing education conferences.

Now, there is nothing wrong with a strong opinion.  But it was a missed opportunity.  The three of us could have talked about the economic, social and cultural forces that these small towns experience, and the ambivalence with which they send the brightest and best of their children off to the University of Iowa, knowing they will not return.  You know, a stimulating conversation that includes Mason's sphere.  Those good social skills of mine.

This time I said, I hate this book.  So do all my fellow clergy.  Our congregations love it.  It's like, So this is what they want us to be.

This time she said, I really like mysteries.  The Mitford series are mysteries.

Awareness was beinning to dawn.  A glimmer on the horizon.

I did see P.D. James, and could have gone there, my literary love affair with Lord Peter Wimsey.  Or the mystery authors I am following lately.  But no, the bright social hypomanic animal was desperate and jumped at the closest at hand, Fried Green Tomatoes, by Fannie Flagg.  Fannie Flagg is not a graduate of the Iowa Writer's Workshop.  Fried Green Tomatoes is not a mystery.

President Mason said, for the second time, that she really needed to move on to her other guests.

Actually, that was the good twin all along, albeit with some recently acquired cognitive deficits.  The evil twin is just as vocal, only irritable and likely to enter Facebook arguments.

If I tell this story to my psychiatrist at next week's appointment, she will say this part of my disease could be addressed by the meds I keep refusing.  But those meds would give me a flat affect, facial tics and forty pounds.  Helen would have no reason to let me out of the house at all.  I would no longer even be cute.

Psychiatrists say that bipolars go off our meds because we miss our highs.  An hour of feeling good at a party, in exchange for a day of regret.  I don't think so.

Bipolar means always having to say you're sorry.


photo by Bill Whittaker and in the public domain
Writer's Workshop logo from the University of Iowa
Goofy from Facebook flair
at September 30, 2010