Before I move to the costs side of Weighing the Costs and Benefits, I pause to consider the concept of noncompliance.

Noncompliance is not one of the best candidates for the OMG! Award, because I cannot point to specific usage -- it is ubiquitous.  On the other hand, it is precisely what this award is about, going to the heart of how language frames thought.  In this case, the word simultaneously names and creates a relationship between consumer and provider.

I don't particularly care for the terms consumer and provider when it comes to health care.  But I use them here, where they distinguish those who consume, literally put pills inside our mouths, from those who fill out those little slips of paper that provide the pills.  Providers replaces pushers, a term I used in a fit of pique last week.  This week, I have resolved to be more polite.

Consumers are told to weigh our costs and benefits.  When we comply with these instructions and, having done so, decide that the costs exceed the benefits, and therefore decide not to consume, then providers call us noncompliant.  What exactly is communicated here?

What is noncompliance, anyway?

I went to the dictionaries.

Don't you hate it when one word is defined by another word that still needs to be defined?  I went back to Webster's, and got these alternatives.

1: a -- the act or process of complying to a desire, demand, proposal or regimen, or to coercion; b -- conformity in fulfilling official requirements;
2 : a disposition to yield to others;
3 : the ability of an object to yield elastically when a force is applied.

So.  One has a desire, demand, proposal, regimen or official requirements, and may have access to force or coercion.  The other fails, refuses, or does not yield.  I wonder which is which?

Providers are disconcerted when consumers fail to consume, and spend a lot of time trying to figure out why.  By the way, this link goes to a review of literature by Alex J. Mitchell, a consultant and senior lecturer in liaison psychiatry at the Leicester Royal Infirmary in the United Kingdom, who receives no compensation from pharmaceutical companies.  I often link to reviews of literature.  Their authors read a jillion studies, including ones to which I do not have access.  Then they summarize the highlights of whatever consensus may have come from these studies.  Reviews of literature put a lot of information in one place.  Mitchell has 59 footnotes (okay, not a jillion -- I exaggerated), in case you want to look up the research behind a particular point.

So scientists speculate, do research, write articles, hold conferences and  train residents, all in efforts to increase compliance.  Their hypotheses about the causes of this behavior include inaccurate beliefs about medication, lack of insight into ones illness, lack of education in general, cognitive impairment, weight gain, sexual dysfunction, and poor patient/doctor relationship.

Mitchell even developed a flow chart to categorize the behaviors of patients: full, partial and excess adherence, intentional and unintentional non-adherence, for external or internal reasons, and various combinations of these.  Not telling your doctor that you have stopped taking your medication is called covert discontinuation, and in other places, covert noncompliance -- that word again, this time with the naughtiness of covert.

A friend noticed that Mitchell missed a category on his flow chart, the consumer who is compliant with other medications, but consistently, though inadvertently, forgets one particular medication that she thinks is the source of uncomfortable side effects.  That could be covert internal unintentional partial non-adherence.  Or would it be covert internal intentional partial non-adherence, covert here meaning that her intention is undisclosed to herself?  The flow chart matters, because having divided noncompliant consumers into subgroups, then they test different strategies to bring different subgroups back into compliance. 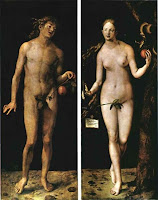 Some notice the non-PC nature of the word noncompliance.  While most articles I found use the term, occasionally, as in Mitchell, I come across non-adherence.  Non-adherence is supposed to imply a mutual agreement between two parties about what the treatment regimen will be.  Other articles use the terms interchangeably, recognizing a fig leaf for a fig leaf.  After all, presumably the consumer and the provider have agreed together about the regimen to which the consumer will adhere.  Only notice, if the consumer does not adhere, then he/she has violated an agreement, or broken a promise.  Still naughty.

Matthew Keene, who serves as an adviser or consultant to GlaxoSmithKline, Cephalon and Pfizer, might have merited the OMG Award on his own, for Confusion and Complaints: The True Cost of Noncompliance in Antidepressant Therapy.  But why pick on just him, because, like I said, this language and weltangshauung (as they say in philosophy -- it means world view) permeates the literature?

Why Don't Consumers Consume Their Antidepressants? -- What the Providers Say

Mitchell cites a study indicating that 10% of those prescribed antidepressants never show up at the pharmacy at all.  Keene's figures are that 28% quit within the first month, 50% within 60 days, and only 28% are still in compliance at six months.  Keene asks, Why do patients prematurely discontinue antidepressants, medications that may improve and perhaps even save their lives?  His answer -- one of the 3 C's of noncompliance: confusion, costs, and complaints.

Confusion, costs and complaints.  Notice that each of these is patient-centered.  He didn't say incoherent, financially foolish and picky.  But they are implied in the rest of the article.  Notice also that he did not describe the phenomenon from the patients' perspective.  He could have said inadequate communication, ineffective or intolerable medications and inaccessible health care and still preserved his clever alliteration.

Why Don't Consumers Consume Their Antidepressants? -- What the Consumers Say

What if patients wrote these articles, or were even consulted?  Actually, they have been consulted.

44% consumers who discontinue medication before their providers would like (the research calls it prematurely) say they did so because it made them sick, most commonly nausea, headache, drowsiness, and increased anxiety.  Well, duh.

I don't know.  Has it occurred to anybody besides me that we could solve this puzzle and put all that research time and money to better use if we gave the scientists a turn as the lab rats?

Another 44% consumers report that they discontinue because the medication is not effective.

That leaves 16% unexplained.  I will get back to them when I discuss costs more thoroughly.

I sorted through lots of these studies before it finally occurred to me to compare rates and reasons.  Noncompliance at six months is 72%.  Back to NIMH's STAR*D study, when trial subjects received compensation, free medical care, extensive information and regular support, antidepressants were ineffective for 50% of those who took them and intolerable for 16%, a total of 66%. -- That was the first trial.  By the third trial, medications were ineffective for 83% and intolerable for 26%, more even than the total.

What I want to know is just how many people take antidepressants when they make them sick and/or don't work anyway?  I personally know three.  Consistent with research findings, that better educated consumers are more compliant, these three have among them a BA, a Masters and a PhD.

Is there something going on here that is not about good medicine?

Psychiatrist Allan Showalter, Rethinking Patient Noncompliance, challenges the premises behind repeated and repeated research on noncompliance, a behavior which found across other diagnoses, not to mention life issues ranging from flossing to portfolio diversification, as well.  Here is the video of an Iowa Hawkeye football player on a motorcycle, one week before the game with our biggest rival.  A football player.  No helmet.  Despite repeated pleas of Kirk Ferentz, the Hawkeye coach.

Yuval Melamed and Henri Szor, The Therapist and the Patient: Coping With Noncompliance, focus on the relationship between the patient and therapist as the source of noncompliance, rather than taking patients at their word.  On the other hand, they use a word that I did not find in any other article.

Countertransference.  Okay, ignoring the definition that includes the word transference, [again -- so irritating when dictionaries do that], Webster's defines countertransference as the complex feelings of the psychotherapist toward the patient.

Melamed and Szor think that noncompliance arouses reactions in therapists who feel that this behavior exemplifies a lack of trust in them and in the corpus of knowledge they represent.  I think that takes us part way there.

It is the therapist's job to manage the dynamics of countertransference in what is an unequal power relationship. That management would include not allowing the therapist's feelings toward the patient to misinterpret the patient's experience as hostility and thus misdirect the intervention.

I have not found evidence that providers of medication ever explore the impact of their own feelings on their treatment of consumers, at least in the arena of noncompliance.  Countertransference is a regular part of psychotherapists' training.  If it is ever mentioned in medical school, none of the literature gives evidence that the lesson sticks.

Sorry about all the numbers in this post.  I have not found in the research any effort to measure the costs side of you have to weigh the costs and benefits that is not filtered through the concept of noncompliance.  So the algorithm will suffer from research that is compromised by its initial assumptions.  Thta is why we had to start with the OMG Award.

Next week, the Muppets will give us a break, while my brain does a bunch of number crunching.