Jared Loughner -- It Doesn't Have To Work This Way

The man who wants to put Jared Loughner to death is concerned for his health.

The United States attorney for Arizona, Dennis K. Burke, wrote to the Ninth Circuit Court of Appeals that despite being under suicide watch, Loughner’s unmedicated behavior is endangering him.

It has been determined that Jared suffers from schizophrenia, and is unable to participate in his defense against the 49 charges stemming from the Arizona shootings that left six people dead and thirteen wounded.  Now somebody wants to get this desperately sick young man some help.  Because if he can't stand trial, then he can't be prosecuted, convicted and executed. 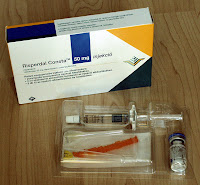 Jared's attorneys think it is not in his interest, under the circumstances, to take Risperidone, a standard antipsychotic medication given to people who think that somebody is trying to kill them.  It might have been in his interest earlier on.  But the community college that noticed his bizarre behavior, including the speech salad that is the dead giveaway of schizophrenia, simply expelled him.

The Ninth Circuit Court of Appeals agreed with the prosecution, and Jared is now being forcibly medicated.

I intended to return to my NAMI Convention reporting this week.  But wow.  This story lands on my laptop, the very essence of the Prozac Monologues spirit.

There are so many layers of meaning here.  I don't think I am up to the task of analysis.  Instead I will tell another story, the original sequel to last week's rerun.

This is how a Christian community responded to the violent act of a mentally ill man. -- as they understand what it means to be Christian.  From January 21, 2010 --

It was seventh century Ireland.  The Queen died.  King Damon's grief was so deep that it moved into depression and then psychosis.  He thought his daughter Dymphna was his queen.  Rather than submit to his advances, Dymphna fled to Belgium, to the town of Gheel.  But her father followed.  When she again rebuffed him, he killed her, cut off her head.  Dymphna was buried in the local church.

Six centuries later, her coffin was found during renovations.  Signs on the coffin demonstrated her holiness.  She began to be venerated.  Cures of the sick were attributed to her.  She was canonized in 1247 as the patron saint of the mentally ill.

Okay, here the one last bit of unrecovered Catholic in me demands to be heard, to note Rome's fascination with girls who prefer death to rape.  Even as a nine year old, that troubled me.

Abandoning The Mentally Ill -- Or Not

Moving on.  People came to Gheel for healing.  Many brought family members who were mentally ill.  Sometimes they left them there.  The priest housed these abandoned ones next to the church.  When the job of caring for them became too much for him, townspeople started bringing in food.  They built a hospital in the 14th century.  When it was full, the real miracle of St. Dymphna occurred, or rather, began.  Townspeople took some of the patients into their own homes, reserving the hospital only for those most ill.

All across Europe, people with mental illness were thought to be possessed.  They were exorcised, tortured and burned at the stake.  But not in Gheel.

Imagine it!  A psychotic foreigner commits a terrible deed.  But the townspeople do not close the borders.  No, they open their homes.

And they still do.  Through plagues, wars, revolutions, recessions, depressions, during the Napoleonic "Reform," when all the mentally ill people in the country were ordered into one big hospital, during the Nazi occupation, with their "final solution" for mental illness, during the latest reform when the U.S. of A. was/is dumping all our mentally ill people out of the hospitals, onto our streets and into our jails, the people of Gheel developed and continue genuine community-based mental health care.

Today, there are 700 foster homes for 1000 people with mental illness.  A person will enter the hospital for evaluation and stabilization.  S/he meets the psychiatrist, psychologist, nurse, social worker and family practitioner who staff one of the five neighborhood community mental health centers.  Each of these staff people spends half a day each week in the hospital, so everybody gets to know everybody.  The potential foster family and patient meet at the hospital, then over tea at home, then over a meal, then over a weekend before placement.  Outpatient care, medication monitoring and therapy continue at the neighborhood center.  If possible, the biological family participates in the treatment plan.

Once part of the family, the person shares in family activities, chores and church.  The church doesn't have special bible studies, services or programs for the mentally ill.  They are fully integrated, regular readers, members of the choir, ushers, etc.

But What About Relapse?

What if the person's symptoms flair?  We say s/he is having a bad day.  Because the person lives in a family, not on the streets or alone in an apartment, problems are caught and addressed early, not after getting fired or evicted or arrested or in a bloody mess.  If needed, s/he can go back to the hospital for a while.  In fact, the hospital is not the place of last resort.  When the foster family has to go out of town, say, for a funeral, the person can stay at the hospital.  There is continuity of care.  There is care.

Three years ago I wrote a chapter for Deep Calling called, If This Were Cancer.  I detailed all the ways that hospice patients receive the support of others, and that people who have suicidal depression do not.  If this were cancer, there would be casseroles...  I imagined the total collapse of care for the mentally ill, under the weight of our crazy health care system.  In fact, it's happening as I write. 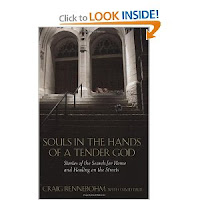 I imagined that the Church would step in to meet a desperate need, to create hospice for the mentally ill, as the Church originally created hospice and hospitals.  I claimed that the Church has the resources to organize for such care on a local basis.  It has the faith to imagine such a thing, the love to cast out fear, and the values to demand it.  I will have to rewrite that chapter.  I didn't know it had already been/is already being done.

I am ever so grateful to Janet, whose last name I don't remember, who gave me Souls in the Hands of a Tender God: Stories of the Search for Healing and Home on the Streets by Craig Rennebohm, the source of this story.

Lord God, Who has graciously chosen Saint Dymphna to be the patroness of those afflicted with mental and nervous disorders, and has caused her to be an inspiration and a symbol of charity to the thousands who invoke her intercession, grant through the prayers of this pure, youthful martyr, relief and consolation to all who suffer from these disturbances, and especially to those for whom we now pray. (Here mention those for whom you wish to pray.)

We beg You to accept and grant the prayers of Saint Dymphna on our behalf. Grant to those we have particularly recommended patience in their sufferings and resignation to Your Divine Will. Fill them with hope and, if it is according to Your Divine Plan, bestow upon them the cure they so earnestly desire. Grant this through Christ Our Lord. Amen.

... I think maybe Jared could use our prayers, too.
photo of Risperidone by V1ND3M14TR1X and used under the terms of the GNU Free Documentation License
image of Dymphna in the public domain
A Kitchen Interior by Joachim Beuckelaer, 16th c., in the public domain
book cover from amazon.com