So I am back from getting my head examined, that three day intensive evaluation.  I had my doubts about this enterprise.  At my most anxious, my therapist reminded me I would get air miles.  That would be something, at least.  To my surprise, I also received some surprises.  And the experience was worth a couple of blogposts.  This one will be about PTSD, or make reference to it.  Next week we will play with the DSM.

I start at the Hilton.  Well, before that, my pension plan, which is how I ended up at the Hilton, not to mention how I ended up getting a three day psychiatric evaluation at the Gabbard Center, which does not usually happen for loonies in my tax bracket.

The Episcopal Church Pension Fund was established by one of the biggest robber barons of the 19th century, J.P. Morgan, doing penance for his sins.  Like how Charles and David Koch aren't.  Since then, clergy have put the equivalent of a whopping 15% of our salaries into the fund.

Unlike United Airlines or General Motors, this retirement fund is not run by people who have the option of stealing it by threatening to close up shop unless the pensioners just hand over their hard-earned savings to increase the compensation of the CEOs.  The shop being the Episcopal Church.  Plus for some reason, in defiance of the way managed mutual funds work in the real world, the Pension Fund beats its performance indexes year after year after decade after decade.  Maybe this has something to do with karma.  Maybe the angels.  Choose your metaphysical system.  Whichever, for me, this is good.

As a consequence, my disability pension comes from one of the last defined benefit plans in America.  And it regularly has to come up with ways to spend its excess revenues, like by providing good benefits for its disabled beneficiaries, even those whose disability is of the loony variety.

And since the people who manage that much money are used to staying in places like the Houston Hilton, then that is where they put up their loony beneficiaries when we are getting our heads examined.

Which is how I came to spend four days there, two blocks north of the Galleria.

Galleria As A Tourist Attraction 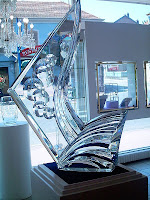 Galleria is where the restaurants are, where we went when we were tired of sitting next to tables at the Hilton where we had to overhear earnest mentors training earnest mentees for their presentations to their big clients.  The oil companies were meeting at the Hilton.  Down the street, Bechtel was meeting at the Westin.  Bechtel is the construction company to the Saudi monarchy.  So it may be the timing was not a coincidence.

We walked to the Galleria.  The neighborhood isn't really designed for walking.  Houston is more of an internal combustion engine kind of place.  So as we picked our way through parking lots, we overheard a father and young son comparing their Beemer to the Beemer they parked next to.  We dodged  Maseratis and Mercedes while crossing streets.  Well, you get the idea.  There was a closer restaurant.  But the doorman appeared to be wearing Kevlar under his vest.  Well, you get the idea.

One of my docs, making small talk as we entered her office, asked if I was getting to look around Houston in the off hours when I wasn't getting my head examined.  I said, No I am too tired.  Except, we went to the Galleria.  She responded, Well, THAT's something!

It was something alright.

Galleria As A Mental Health Hazard

One evening on our way toward sushi, a young man held out soap samples.  I said, No thanks, I don't do scents.  Then he grabbed my hand.  Okay, he asked permission.  I see your nails are clean.  You don't paint your nails?  No I don't.  Let me show you something.  So he explained about ridges and natural oils while he did his flirty little small talk and buffed one of my nails.  Now don't scream when you see the results.  Indeed, the nail was beautifully shined, and made the notion of painting nails seem cheap.  I agreed it was beautiful and said I was not going to buy the buffer anyway.  Why not?

Because I don't buy things.

That took some explaining, both to him and to myself, since I had never said those words before.  He decided I had made a life style choice.  Well, okay.  That would be one way to look at it.

But it was more like a commitment than a choice, made then and there.  I would no longer buy things. 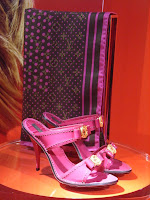 Don't get me wrong.  I am as fem as they come -- short of destroying my feet in those instruments of torture that women willingly put on their feet nowadays.  Evidently, all that work we did in the 1970s to get women to love ourselves was a waste.  In other cultures, women are forced to deform their feet.  Having stopped in the 70s, now we do it again.  In the US, we call that freedom.

Where was I?  Oh yes -- I found those beaded dresses in the Gucci windows quite lovely.  And I have some beaded things in the back of my closet from pre-loony days.  Maybe not pre-loony, maybe just not-yet-identified hypomanic days, who knows.

But tripping past them, dodging the Lexus SUVs, all of that, I felt this growing sense of doom about the American way of life.

What The American Way Of Life Costs

I couldn't shake the images of three young men.  One is a friend of my son's, who came home from Iraq with a TBI and PTSD.  Another is a relative with a couple tours of duty in Afghanistan and a troubled marriage.  The third is a young man I counseled, who signed up, hoping to come home a hero in a box.

Support the troops, people say.  Support the ones who are protecting our freedom.  Freedom to shop at Galleria.

There I was, surrounded by the way of life they were protecting at the cost of their brains and their families and their lives.

It is too high a cost.

It is too high a cost.

These thoughts, coming in the midst of getting my head examined, make me think we need to get America's head examined.

This isn't a political blog.  I do advocacy about mental health issues.  I am not here to plug political opinion.

This is not an opinion.  This is a photograph.

This is another photograph.

And here is another.

And now we return to the shoes.

As I look at one picture, then another, as I listen to those young men, and then to the people in that restaurant next to me, I do have an opinion.  Here it is.

These shoes cost too much.

They cost too much.

Actually, I don't think this is about mental health, after all.  It is a sickness of the soul.

What Is The American Way Of Life?

I did meet some very nice people at the Houston Hilton.  One man was from Ethiopia.  He drove the shuttle, and we got to know each other in twenty-minute conversations each day on the way to the Gabbard Center.  He came to this country because he wanted opportunity.  And he found it.  He drives a shuttle bus.  His eldest is a policeman.  His daughter is about to graduate from college, and his youngest about to enter.  He doesn't need a Maserati to have the American way of life.

The other shuttle driver came to the US during the war in El Salvador.  We talked about Archbishop Romero, and the strength we still get from his witness.  If I remember right, somebody gave Archbishop Romero a pair of shoes for his consecration.  People gave him lots of things, but his friend asked him what he wanted, and he said shoes.  This former refugee, now shuttle driver, also found the American way of life.  Emphasis on life.  He doesn't need a Lexus.

People say our young men and women are sacrificing their minds and their bodies to protect our freedom.

We need to protect our freedom ourselves.  We are not free.  We are addicted.  Addiction is a disease of the soul.  And it is progressive.  The more you feed it, the worse it gets.

Our freedom begins when we acknowledge our addiction for what it is.

Step One -- We admitted we were powerless over our addiction - that our lives had become unmanageable.

I don't want those shoes.  But I do want that beaded dress.  And having resisted it, having told that young man I don't buy things, the very next day I still almost bought an Eileen Fisher sweater at Nordstrom's across the street.  Because it was on sale.

Just in time I remembered those three young men.  That sweater cost too much.

My Bit For The War Effort

PTSD, Post-Traumatic-Stress-Disorder is bankrupting the defense budget.  Researchers are trying to figure out how to prevent it.  Does it take a neuro-scientist to figure out that you prevent Post Traumatic Stress Disorder by preventing the trauma?

I have decided to support the troops the way the troops do, by caring about what happens to their buddies and acting to prevent harm from coming to them.  I will not wrap a flag around my shoulders nor post one on my facebook page for Veterans' Day.  I will hold before me the faces of those three young men, and wrap myself in my love for them.

I will work the Steps, always remembering that I am just as addicted to things as any of you.

With God as my higher power, the next time I buy something, it will be a bicycle.  So I can leave my Civic in the garage.