Healthline.com is sponsoring a Best Health Blog of 2012 Contest, and Prozac Monologues is one of the contestants.

Click on Best of 2012 to vote Prozac Monologues the Best Health Blog of 2012!  The list is long -- find Prozac Monologues alphabetically.  You can vote every day until February 15th.  The contest started on December 21, so I am behind on the multiple vote front.  Tell your Facebook friends!  Tell your neighbors!  Tell the people using their SmartPhones at the coffee shop!  I guess you have to use a Facebook or Twitter account to cast your vote.

Meanwhile, I went back to look over my own work for the year, and invite you to do the same.  Click on the word comments at the bottom of the screen to weigh in on what you think of this body of work, or any particular piece of it. 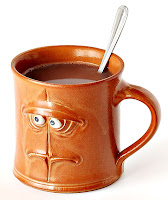 Judging by page views, the Popular Vote far and away goes to Dopamine - Can't Live Without It from March 23, 2012.  Coming in the middle of a series on the Stages of Change approach to changing the way we eat, this post traces the brain circuits that brought you from your grandma's cocoa to your daily Starbuck's habit, or from The Cocoa That Ate Your Brain to Pimp My Cocoa.


This post also wins title to Author's Most Fun to Write.  I even got to create a graphic that summed up the neuroscience, which I checked with a scientist, and he gave it his blessing.  Hmm, maybe I should pay attention that -- the most fun turned out to be the most popular... 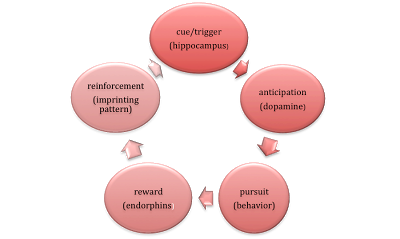 A Year of Series

This was a crossover series, how to change brain patterns to change eating habits.  There are a gagillion blogs about weight loss.  Prozac Monologues took it on for two reasons.  First, weight gain is the most life threatening side effect of the meds taken by people with mental illness.  The most frequently prescribed meds (Seroquel -- an antipsychotic, for God's sake!) are the ones that cause the greatest weight gain.  This side effect may be the leading cause for our premature death, 15-25 years earlier than our normal life span on average.  Our doctors give us almost no counsel about weight loss, and they know even less.  The series tries to fill the gap.

Second, the whole seven posts provided the occasion for me to create that graphic up there.  I love this stuff!

I, like most mental health bloggers, have been following the proposed revision in the DSM.  The DSM IV says that a diagnosis of Major Depression cannot be given if the person with symptoms of depression lost a loved one within the previous two months.  The proposed DSM V eliminated that restriction, called the Bereavement Exclusion. 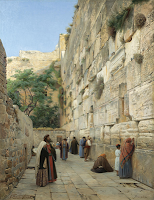 The national press jumped all over this issue, claiming the revision would call grief a mental illness.  Bad reporting, but it made for catchy headlines and got its desired hysterical response, petitions of protest, heart-wringing stories concluding that the proposers just don't understand how devastating the loss of a child is.  How do you argue with someone whose child has died?  Let alone 300,000 of them?

The proposal doesn't actually turn natural grief into a mental illness, and that is what the series was about, arguing that people who have depression lose loved ones, too, and we need to be helped with our depression, not told to wait, lest normal people be contaminated with the stigma of our diagnosis.  Sigh.

This also was a popular series, with two of the four posts coming in at 2nd and 3rd most popular. The highlight of my blogging career thus far, Grief/Depression III -- Telling the Difference was quoted in correspondence among revisers.  The final version of the DSM V has no Bereavement Exclusion.  Was I heard?

So I was busy this year.  The next series scavenged from a six month project, producing a Power Point presentation on recovery for Mental Illness Awareness Week.  The presentation was a tour de force that compared the medical model of recovery with that created by those of us who have a mental illness, then documented the neuroscience behind non-medical paths to recovery, and gave me a ten-post series to boot.

Again with the graphics.  The one below hit the pay dirt. 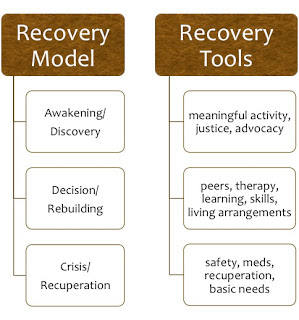 Doctors know meds.  They lead, follow and follow up with meds, at every stage, and don't want to reduce meds when somebody improves and wants to reclaim a life back from the side effects of all those meds, because they fear returning to the crisis.  The more enlightened doctors have heard that therapy and education improve outcomes.  So they throw a whole bunch of therapy and education at people who are in crisis and numb and not able to hear or feel a thing.  And then they decide that therapy and education don't work in real life, and go back to more meds.

Here is another approach.  Figure out which stage of recovery you are in from the boxes on the left.  Draw a horizontal line to the right and pick what you need from the box of tools.  You get best results when you use every tool appropriate to your current stage that is available.  When you improve, move up.  When you relapse, figure out where you are on the left, and begin again.

From God to Neurons

Okay, wrap this up, Goodfellow.  All of the above are potential books.  Some singles were fun for me, and I hope for you, from the theology of that Tim Tebow thing (anybody remember him?) to a review of my blogmate John McManamy's book, Raccoons Respect My Piss to Pinky and the Brain, 2012 has covered the waterfront.

Then on to 2013, rejoicing that you and I are still here, and praying peace on those who are not.  May we all be held in the Hands of a Tender God.