Depends on what you mean and who and you ask.

If it's not, well there goes my career. And indeed, in some corners, my career never got out of the gate. But here's my story.

Humor serves several functions for us loonies. The first for me was as a coping mechanism.


Prozac Monologues, the book, the brand came into being in response to a traumatic incident, an incident that took place entirely inside my head. It took fourteen years before I was able to describe it adequately enough to find out what actually happened. I read the opening pages of the book to my therapist, told her it was firmly in the past, and asked her to tell me in her most clinical language what the hell happened. And she did, boy did she, words like depersonalization, derealization, poor reality testing, paranoia, thought broadcasting.

It was not fun, the original incident, that is. So not fun that I repressed most parts of it for over a decade.

But it was funny. I converted all those experiences described by all that clinical language into a thought, one bizarre thought. A funny bizarre thought. And I spent the next three weeks after it happened composing a stand-up comedy routine around that one thought.

I took an experience that was not fun and put a frame around it that was funny. Yes, it is funny. Lots of people laughed when I performed my stand up comedy routine. If you come to a reading, you'll laugh, too!

So that's the first way that humor serves those of us who are mentally ill. When we can laugh, we regain a sense of control over situations in which we do not have control.

It's an ancient principle of comedy. Comedy = pain + time. In comedy we pick the time. We tame the pain. We gain control. Like: 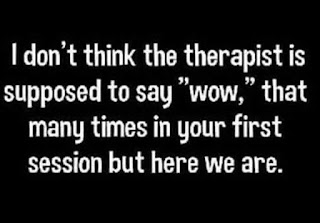 The second way that humor serves us connects to cognitive therapy. Examine the thought, the experience. Step to one side of it and evaluate it. And conclude: I mean, really, isn't it ridiculous?

From the chapter "Squirrel!":

"I get up from my laptop to get a glass of water, and there is the pork chop that needs defrosting for lunch. Next to the microwave is the grocery list, including the vegetables for lunch. On the way to my wallet, I see laundry to be folded. On a shelf in the linen closet are my empty pill cases. On the counter where I carry the pill cases and the pills to fill them is the pork chop that still needs to be defrosted for lunch.

"Squirrel" describes a symptom of mania, also of depression. Distractibility is not a fun symptom. It is, in fact, disabling and part of the reason I did not finish my doctorate. On the outside, it looks like lack of discipline. On the inside, it is incredibly painful to have enormous will to do something but some uncrossable gap between that will and the capacity to carry it out.

But really, when you stand to one side of it instead of wallowing in it, isn't it ridiculous?

And that is what you learn to do in cognitive therapy, examine your thoughts, test their logic. The laugh is one way to pronounce judgment.

When mental illness humor is not funny:

Well sure, it's not funny when it's laughing at instead of laughing with. Calling people psycho, making fun of symptoms, using humor as a weapon, whether to inflict pain or express a political opinion.

So humor has to be used carefully when you're not talking about yourself. A classmate in grade school with a Polish last name called me up short and informed me that she could tell Polish jokes, but I could not. This wasn't political correctness. It wasn't even good manners (which is what my mother taught me before good manners were mocked by calling them political correctness). It was flat out how to avoid a punch in the face. Thank you, Monica, for the lesson. And for not punching me in the face.

When I wrote The Suicide Monologue for World Suicide Prevention Day, I opened with a humor warning. It seems that these suicide prevention events are generally aimed not at those who are suicidal, but rather at those who have been touched by somebody else's suicide. I don't know anybody in that camp who has ever gotten over the horror of losing a loved one to suicide. I respect that.

John Moe specializes in depression humor. At a time when I needed a laugh, my therapist told me about The Hilarious World of Depression. Moe does weekly interviews with comedians, other performers, musicians, and athletes about their depression. Head over there for hours of good times.

For the MRIs illustrating the science of what is happening inside the brain during humor, or as they call it in research circles, "nonserious social incongruity", head over to The Functional Anatomy of Humor: Positive Affect and Chronic Mental Illness for the MRIs that prove what you've always heard:

Laughter is the best medicine, you know, besides medicine.
at March 03, 2020