Truth be told, I want to respond with name-calling: selfish, anti-science, "drank-the-kool-aid"... I am tired of dodging the maskless in the street and the grocery aisle. I resent being confined to my home to protect myself from my fellow citizens. I grieve the slow, and now not so slow, decimation of the population of the United States, my native land, hurdling toward third world status as our health care system collapses, our food chain folds, and our future generations head toward long-term disability.

Side comment/serious question: There is such variation world-wide in leadership and results. Some countries have got this pandemic under control. Who benefits, who is the one who gains by our abysmal mismanagement and consequent destruction of the United States of America?

But 1) name calling is not helpful, 2) I actually care about some of these people, and in general, 3) I commit to the Way of Love. So I am stuck with listening more deeply.

I will begin with a real thing. Some people say they can't breathe with a mask on. Let's separate this phenomenon from the false claims out there that carbon dioxide builds up inside masks or that blood oxygen levels drop when people wear them. No, they do not. You wouldn't want your surgeon wearing one all day if this were true.

Evidently there are a handful of people who have medical conditions that are complicated by wearing masks. But that woman screaming inside a store that she has a card from her doctor and if they don't let her wander around maskless, they will face legal jeopardy - no. Whoever sold her that ADA card didn't explain the law to her, and she should demand her money back.

But she might have a panic disorder. It may even be a previously undiagnosed disorder, a trauma response that the mask has triggered from buried memory, or maybe sensory processing difficulties like people with autism sometimes have.

This "I can't breathe in a mask" thing is likely a psychological issue. And I am all about taking psychological issues seriously. People who have these reactions to mask wearing can overcome their difficulty with training. Some World War 2 soldiers learned to tolerate gas masks with such training. Forbes just published an article with suggestions from a number of doctors who deal with these issues in their practice.

If you take the concern seriously, if it is a genuine concern, you can offer help.

We all want to belong. But the things we used to belong to are gone or on the ropes. In the absence of churches, unions, fraternal organizations, amateur sports teams, even extended family, or anything that used to give us a sense of pulling together for a common cause, today our remaining connections to our handful of drinking buddies loom large. I saw a sign in one photo of protestors: Bar Lives Matter. And really, they do. Evidently, it's a political movement. 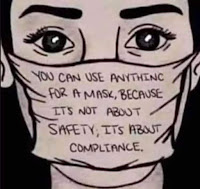 Under the bravado and the protest may be an intense concern about what others will think. Peer pressure works both ways, to reinforce healthy habits and unhealthy habits both. And there is concerted pressure out there to shame people who wear masks, to divide us into the "fearless" ones and the "sheep." If their bar buddies are their only source of affirmation, what are they going to do? Suck it up, believe whatever they have to believe so they can still belong.

(Again, who gains by this killing off of all everybody's drinking buddies?)

I don't have a link to a quick easy solution on this one. One thing clearly won't work, cutting off the people you disagree with.  It can only help to hang in there with people who need people, to keep being somebody they know who does wear a mask, who wears a mask with their favorite sports team on it, who wears a mask because they care about whether their drinking buddy lives or dies.

Which brings me to one more reason why people may not wear a mask.

I know a doctor who works in Ohio in the heart of the opioid epidemic. She talks about the people who come to her in pain, seeking pills, seeking relief. She says they do have pain, genuine pain. She calls it SLS, Shitty Life Syndrome.

There's a lot of that going around. Shitty Life Syndrome is the pandemic that preceded COVID-19.

When the virus first made its appearance, people on Twitter who talk more openly than most about chronic passive suicidal ideation acknowledged the thought - the virus might be an easy out. I mean, they may call me stupid, but they won't apply the shame label of suicide if COVID is what takes me. 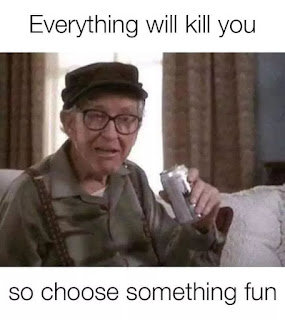 People are losing their jobs. They face becoming homeless. They know that if they become ill, they cannot afford to go to end up in ICU. Every day I hear despair, hopelessness, a deep nonchalance about survival.

You will not find an argument in this post about the ethics of suicide. You will find another argument. It is immoral, no matter what you do with your own life, it is immoral to take other people out with you. When you get COVID-19, you infect others. Even if you recover, they may not.

But arguments do not work with the suicidal. What works takes a whole lot more work: decrease their pain and/or increase their resources.

I can't listen all the time. But in the face of so little over which I can control these days, my own behavior is one thing I can control. So I'll give it another try.


kool-aid man from Wikipedia
surgical team in masks from medicalxpress.com
memes found on a friend's Facebook page
at July 10, 2020