I have to move a lot to manage my anxiety disorder. So why did it take so long for me to discover podcasts? I can do research and fold laundry at the same time! Here are four of my favorites:

My therapist recommended The Hilarious World of Depression, hosted by John Moe, a few years ago. And I recommended it to you as part of my Giving Thanks series last November. A depressive himself, John interviews comedians, musicians, and other celebrities, asking the question, Is depression funny? Not everybody thinks so, but that's my brand. The show was recently cancelled. Sigh. But with five seasons, that's a lot of bingeable laughter to come your way. And you can often find Youtubes of the featured comics to extend your pleasure. So have at it.

I should mention that John has just published his memoir by the same name, for when you can sit still and read.

I discovered Beyond Well, hosted by Sheila Hamilton after reading her memoir about her husband's undiagnosed bipolar and subsequent suicide. It is the cautionary tale and not so funny version of my book. Well, she wrote hers first, but I don't want to say I wrote the funny version of hers. It's not always funny.

Sheila is an award winning journalist in the Portland, Oregon area whose career turned to mental health journalism after her husband's death. Her guiding principle is: We are all on a spectrum of mental health and everyone will struggle at some point in their life. Beyond Well is here to listen, affirm, and share stories to help you feel less alone in the world. And that does describe the effect of listening in on the conversations that Hamilton has with professionals and people with lived experience - to feel less alone.

Both Moe and Hamilton are included in the resource section of Prozac Monologues: A Voice from the Edge. The following are discoveries made after my project manager refused to accept any more revisions. 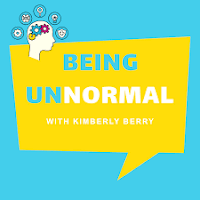 Kimberly Berry's Being Unnormal is like having coffee with a friend, a powerful, dedicated, and smart friend, my favorite kind of friend, who does not mince words and is a mother tiger when it comes to her kids, and then talking about the stuff that matters to the both of you: being queer, being adhd, being bipolar, being black and traumatized... Oh, and she invited an expert to join the conversation. You laugh, you feel, you think. And you show up next week to find out who shows up next.

Berry is the mother of one daughter with bipolar, another with ADHD. She is the founder of Being Normal, a coaching and consulting group that assists people navigating the world of mental health and companies to create mental health focused policies.

And then there is Gabe Howard, who hosts the Not Crazy Podcast on PsychCentral.com, along with his former wife Lisa. Not Crazy advertises itself as the mental health podcast for people who hate mental health podcasts. This is a more reflective podcast than most, if I can use that word for heated conversations about controversial issues. Reflect: consider issues from a number of angles, rather than simply educate on a topic. They take a perspective, or Gabe takes one and Lisa challenges it. Then they wrestle it into the ground, often trading positions in mid argument. The anti-psychiatry movement, mental illness humor, the role of religion in treatment... Two people with mental illness (Gabe has bipolar,Lisa depression) arguing passionately about the things that interest people with mental illness. It works.

Personally, I love it. Their conversations remind me of late night debates in my college dorm. Okay, I went to Reed College. Maybe that's not what you were doing late nights in your dorm, but it's what me and my buddies were doing in ours. Gabe's bipolar makes me feel like I am with my tribe, loud, bright, passionate.

Gabe also hosts a more conventional mental health podcast, the Psych Central Podcast where he reins in the intensity "to break down complex topics in simple and understandable ways.

I haven't read his book yet, but I post it here, because I think he puts out a quality product. This guy has been at the mental health advocacy gig for fifteen years and has earned his street cred.

So what about you? What are you listening to? Who should I add to my list?