And now for something completely different, the true origin of Curiosity's name?


Marvin the Martian looks at us, and observes, There is a growing tendency to think of Man as a rational, thinking being, which is absurd.  There is simply no evidence of any intelligence on the Earth.

Meanwhile, in case you missed it, NASA has landed a rover named Curiosity on Mars.  If you did miss it, then you might be curious about what called Marvin to my mind.  Curiosity has yet to meet Marvin.  It is, however, meeting a lot of rocks.  It doesn't seem to be enjoying the rocks.

Follow the twitter feed from the Martian Rover here.  (Keep scrolling to the bottom to find the beginning.)  I think Curiosity works better on Prozac Monologues than Bugs -- different chapters from the DSM, you know.  Three days, and it's already into isolation and suicidal ideation...

But if you must, here is NASA's version of events.  Obviously not yet hearing its pain. 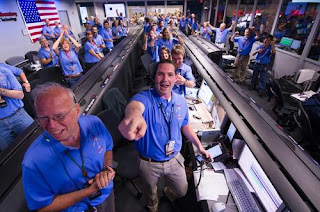