Margalea Warner is one of my partners, along with Carol Porch, for a Mental Illness Awareness Week presentation in October, Recovery: Rewiring the Brain.  Margalea is active in the Mennonite Church in Iowa City.  They have been supportive on her journey in recovery.  She says there were some years when she was hospitalized so often she bankrupted their flower fund!

This week I am reposting her recent contribution to ADNET, Anabaptist Disabilities Network.  Margalea's story is one of those lights I hold up when things get dark.  I hope it shines for you, as well.

Keys to Wellness and Friendship -- by Margalea Warner 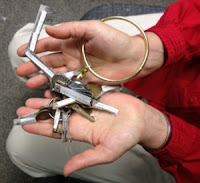 On August 12, 2012, a group of my friends gathered at the home of my friend Becky for a celebration of two major life milestones.  My friend Sherry had achieved twenty-two years of being clean and sober.  I had reached the milestone of seventeen years outside the locked psych ward.

Years ago, Becky had invented the non-alcoholic drink contest to honor Sherry's years of sobriety.  Each of the guests would bring their tastiest non-alcoholic drinks for Sherry to sample.  Sherry would joke about accepting bribes and we would blindfold her so she wouldn't guess who brought which beverage.  She would sniff each cup we handed her, sip one and then the next, swish them around her mouth and then pronounce the winners, starting with the last runner up (somehow the soy milk with cinnamon and cayenne pepper didn't rank very high) and culminating with the first place beverage.

Over the years, we had so much fun with Sherry's ritual that I began to plan a ritual of my own.  I decided keys would be a good image.  The only visible difference between staff and patients on the psych ward, where all staff wear street clothes, was that the staff carried keys.  Coming into a locked ward, one always passed the sign announcing "elopement precautions" -- I didn't have anyone to elope with anyway.

So, anticipating the ritual, I started collecting castoff keys from my friends, along with prayers and blessings.  Some were house keys, others luggage keys, one car key (where is that car parked?).  The three most unusual keys were from a friend who collects antique keys.  My favorite key of hers is an 1870s-era hotel key: a long black key designed to make the keyhole harder to pick -- it folds in half to fit more easily in a pocket.

Although I collected keys randomly, I ended up with exactly the seventeen keys I'd hoped for, to symbolize seventeen years outside the hospital.  I put them all on a big round key chain that came with a whistle.  The night of the party I brought the keys in a pretty metal tin with pictures of fruit on it that reminded me of the fruits of the spirit.  I took the keys out and with each key read the prayers and blessings and testimonies people had given me.  I felt it was a kind of witnessing.  My fur person Chester couldn't be there but Becky's cat Trinket stood in for him as a feline spirit.

The keys themselves are less important than the intangibles they stand for -- I call them my Keys to Wellness.  I taped these names to the keys:
As a finishing touch, I added:

Think Outside the Box (This I taped to a fingernail clipper, which could probably pick a lock in a pinch!)

Ask for Help (I put this on the whistle.)

After the party, two more keys from my godmother arrived: a skate key and a jewelry box key.  I decided that together they stood for two short words that are of huge importance in my life.


I'll add just one more note about what this woman has taught me about perseverance.  She was teaching a Peer to Peer class that I took, and told us about Tai Chi.  Somebody asked, Does Tai Chi relieve stress?  Margalea's response, The first fourteen weeks were very stressful!

Fourteen weeks!  She said it got better after that.

Is Recovery Possible? - Kayla Harrison Continued August 25, 2012 -- The judo champ's story introduces the concept of recovery.
Recovery - The Medical Model September 7, 2012 -- Introduces the doctor's agenda, covers the first half of the story.
Recovery - The Medical Model Continued September 14, 2012 -- It was a great idea.  If only it worked.
Recovery Redefined September 21, 2012 -- People with a mental illness have our own definition of recovery.
Recovery - From What? October 1, 2012 -- You have to know where you are going if you want to get there.
Stages of Recovery - AKA Hope October 5, 2012 -- We recover in stages, and need different tools for each stage.
Neuroscience of Meaningful Work October 10, 2012 -- Oh goodie!  Here come the dendrites!
Hope for a Cure? Or Not? October 18, 2012 -- We finish the series with questions left unanswered, like, What is a cure worth?

photo  of M. Warner's Keys by William Silverman, used by permission
at August 30, 2012